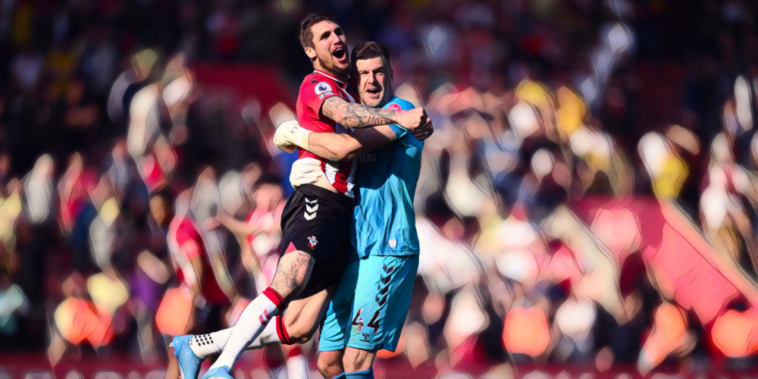 Manchester United reignited their hopes of securing Champions League football as the marquee man delivered at Old Trafford, with slip-ups for Tottenham and Arsenal opening up the top four race.

There were late winners across the division as both Newcastle and Brentford snatched stoppage-time winners, the latter continuing their march up the Premier League table with a sixth win from seven fixtures.

Here are our Heroes and Villains from the weekend’s Premier League action.

In keeping with a career of breaking records and compiling absurd statistics, Cristiano Ronaldo scored his 60th career hat-trick this weekend.

It’s a staggering number and his latest treble has kept alive Manchester United’s hopes of Champions League football with the Red Devils moving within reach of the top four after beating Norwich.

30 hat-tricks before 30 and 30 hat-tricks after 30. It’s time to unbalance the scale! 💪🏽 pic.twitter.com/McgGZBmzyh

Not for the first time this season, Ronaldo’s ruthlessness around goal compensated for defensive deficiencies from his side, as United threatened to capitulate against the Premier League’s bottom side.

Norwich fought back to level after Ronaldo’s clinical first-half brace, before the 37-year-old banged home a brilliant free-kick to claim both three points and the match ball.

Ronaldo won’t be around forever and perhaps not even at Manchester United next season, but there’s no doubt that his match-winning talents have bailed out this version of the Red Devils this season, a team lacking cohesion, consistency and direction.

Imran Louza had a glorious chance to snatch a crucial three points for Watford this weekend, but somehow managed to waste his opportunity with an open goal.

The midfielder failed to adjust his feet and spurned his shot wide, before Brentford went up the other end just seconds later to score a stoppage-time winner.

In a game of fine margins, it was the costliest of errors.

Arsenal lost for a third consecutive league fixture at Southampton, in no small part to the heroics of Fraser Forster in the home goal.

Forster said there had been some ‘soul searching’ at Southampton this week following the club’s 6-0 loss to Chelsea last weekend and the goalkeeper certainly found something from within after an inspired performance.

The 34-year-old made a string of superb saves, denying Bukayo Saka from close range after scrambling across his goal-line and producing another reactive save to thwart Emile Smith Rowe.

Maxwel Cornet missed a glorious chance to put Burnley in control at West Ham, dragging his penalty wide at the London Stadium.

The Clarets had been leading 1-0 at the time of Cornet’s miss, but conceded an equaliser to drop precious points in their survival bid.

There was confusion over the taker with Jay Rodriguez believed to be the designated taker, but a confident Cornet – who had never previously taken a penalty in senior football – stepped up before driving his effort wide.

It could be a miss that costs Burnley their place in the Premier League.

Newcastle have a new fans’ favourite after Bruno Guimaraes’ impact since arriving in the Premier League, with the midfielder having made an immediate impression at St James’ Park.

Guimaraes was the most eye-catching deal of the Magpies’ winter window and the £33m addition has hit the ground running, including a match-winning double to down Leicester this weekend.

NEWCASTLE SNATCH IT IN THE 95TH MINUTE! 🤯

Bruno Guimaraes has grabbed his second of the afternoon and it secures the victory for #NUFC 👀 pic.twitter.com/CDzpiD0udz

The Brazilian scored both goals in the club’s 2-1 win over the Foxes, prodding in a close range equaliser before diving to head home a dramatic stoppage-time winner.

The 24-year-old showed brilliant desire to run the full length of the pitch to meet Joe Willock’s cross, a fitting finale to a performance which showcased his range of passing and in which he covered more ground than any other teammate.

The pre-game talk was whether Eric Dier deserved an England recall after an improved run of form for Tottenham, but the defender will not want to watch his involvement in Brighton’s late winner again.

Dier was sold a dummy by Leandro Trossard as Brighton snatched a last-minute goal in North London, the centre-back fooled far too easily as the Belgian skipped into the Spurs box to score.

It was a disappointing moment for Dier and he will hope for a response as Spurs look to bounce back at Brentford next weekend.

Yves Bissouma was arguably the best player on the pitch as Brighton beat Tottenham this weekend, with the Mali international producing a dominant performance at the centre of the Seagulls’ side.

Purposeful in possession and industrious in his off-the-ball work, Bissouma broke up attacks from the home side and drove forward to put Brighton on the front foot.

Graham Potter lavished praise on the 25-year-old after the win and called Bissouma’s showing ‘Champions League level’, a level the midfielder could perhaps be playing at next season as Premier League sides circle once again.

Having held on to the midfielder despite interest from Aston Villa in January, Brighton might be forced to cash-in on the star this summer as he enters the final 12 months of his contract at the Amex Stadium.

Cedric Soares endured a miserable return to Southampton this weekend, producing a poor performance as Arsenal crashed to a third Premier League defeat in succession.

The right-back’s tough time included two awfully taken free-kicks, with Cedric having somehow found himself on set-pieces despite a career record of just one free-kick scored.

It came as little surprise when he was substituted on the hour, after what was the Portuguese defender’s worst performance since replacing the injured Takehiro Tomiyasu.

Read – Ranking the most expensive Premier League signings from Portugal