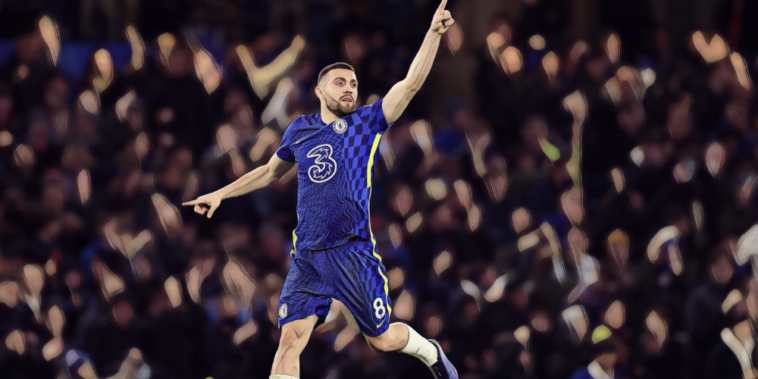 The weekend delivered a whole host of goals and contentious moments, with the best viewing found in the capital as Chelsea and Liverpool played out a 2-2 draw that does little to improve either side’s fading title hopes.

Manchester City moved 10 points clear at the top after leaving it late to beat 10-man Arsenal, whilst the London derby between Crystal Palace and West Ham proved another entertaining affair and there were vital wins for Brentford, Tottenham and Leeds.

For a time there were questions regarding what type of footballer Mateo Kovacic really is. By now, Premier League watchers should be aware that the classy Croatian can really do it all.

The Chelsea midfielder works hard, can tackle, threads passes and glides past opponents as if they aren’t there, and against Liverpool he exhibited the very best of his multi-faceted qualities, leading the clash for duels won (13), tackles made (6) and take-ons completed (4).

The 27-year-old is press resistant and carries the ball as well as any footballer in the division, oozing class as he meanders his way through opposition traffic in Premier League engine rooms.

His partnership with N’Golo Kante is a real mix of quality, with Liverpool having failed to make a single tackle on the dynamic duo during the 2-2 draw at Stamford Bridge.

Oh, but he can’t score goals we hear you cry? Well, that theory was disapproved with an outrageous volley against Liverpool this weekend, a stunning strike that proved the catalyst of Chelsea’s comeback in the capital.

If only he shot more often…

For much of the opening hour of Arsenal’s game with Manchester City this weekend, the praise heaped on an emerging Gunners side was looking more and more merited following a spirited showing against the league leaders.

The north London side’s exciting contingent of forward talent had troubled the champions, whilst their improving backline had largely nullified the opposition’s considerable threat.

The narrative of the game swung inside the space of two minutes, however, first the conceding of a penalty that saw Granit Xhaka naively give Bernardo Silva ample reason to go down inside the box.

In the proceeding protestations, Gabriel was cautioned for attempting to scuff the penalty spot, a tactic that failed to pay dividends as Riyad Mahrez slammed home an equaliser anyway.

Just minutes later and the Brazilian picked up a second needless booking, hauling down Gabriel Jesus at the relative safety of the half-way line.

Gabriel has been an impressive performer in Arsenal’s resurgence but his two moments of self-destruction proved costly as Rodri hit a late winner for City – and could come back to haunt the Gunners in their pursuit of Champions League football.

The 22-year-old was a constant outlet for Brentford from right-back and drove forward to tee up Yoane Wissa for the equaliser, the latter scoring in fine fashion with a brilliant first touch and curling finish.

Brentford then showed their encouraging ability to find goals through various avenues as Roerslev fired in at the second attempt for his first goal in English football.

Brentford are now 12th after moving above Villa with victory over this weekend’s opponents, the Bees now well-placed to secure safety in their maiden Premier League campaign.

The unrest at Everton has increased once more following a home defeat to Brighton, the defending bordering on shambolic for the home side with Michael Keane enduring a nightmare performance.

The centre-back was arguably at fault for all three of Brighton’s goals, first losing the run of Alexis Mac Allister for the Seagulls’ opener.

Keane then inexplicably provided Dan Burn – the tallest player on the pitch and Brighton’s biggest aerial threat – the freedom of the penalty area to head home a second, before a scuffed clearance handed possession back to Graham Potter’s visitors in the build-up to the third.

Everton are badly in need of reinforcements and Keane – who bizarrely attempted a left-footed 40-yard effort in stoppage time with the Toffees trailing – could be amongst the first removed from the starting side.

Thomas Partey’s best has been infrequent in an Arsenal shirt, but the midfielder’s monstrous showing against Manchester City was evidence that he can dominate elite engine rooms for the Gunners.

The Ghana international was outstanding in a performance that showed the best of his athleticism and technical talents, unsettling the City midfield with his domineering dynamism.

In the first half vs Man City, Thomas Partey ranked 1st or joint-1st among players on the pitch for:

Partey can protect the back four and progress the ball to get his side on the front foot, either with cutting passes between lines or marauding ventures forward when released from his shackles.

His absence will be a blow to the Gunners as he heads off for Africa Cup of Nations duty this month and Mikel Arteta’s focus must be on finding the perfect partner for a player who can play a major role in this side.

Even in an era where VAR scrutinises decisions, there are still some footballers who believe they can get away with conning officials.

Trezeguet was the latest to try his luck in embarrassing fashion this weekend, taking a theatrical tumble in a failed bid to cheat Aston Villa towards a penalty.

How the winger avoided punishment for simulation is anyone’s guess, his desperate dive a moment few will want to see again.

Declan Rice just keeps on getting better and better at the heart of the West Ham side, the England international having evolved into one of the most complete midfielders in the Premier League this season.

Rice was once viewed as a combative presence suited to an anchor role, but he has flourished amid greater freedom for the Hammers this season with the sight of the 22-year-old powering forward becoming ever more familiar.

Rice was excellent once again as West Ham won at Crystal Palace, setting up his side’s second with a lung-busting run from inside his own half before finding Manuel Lanzini on the edge of the area.

Declan Rice has become the youngest ever player to make 150 Premier League appearances for West Ham.

It was an assist that marked the midfielder’s 150th league appearance for the club, becoming the youngest ever player to reach that milestone for West Ham.

He has been amongst the Premier League’s finest footballers this season and is the heartbeat of the Hammers’ side, a talent that is driving David Moyes’ side towards the level of the clubs keen to prise him away from the London Stadium.

How must Romelu Lukaku have been feeling watching Chelsea’s draw with Liverpool? The forward had been omitted from the squad following his controversial comments in an interview with Sky Sports Italia.

The Liverpool backline will no doubt have been pleased to see a team sheet without the presence of the bulldozing Belgian, who, after returning to form and fitness in recent weeks, is now facing an uncertain future at Stamford Bridge.

Lukaku was signed to fire Chelsea towards the Premier League title, but his absence this weekend perhaps put the final nail in the coffin of their challenge with the west Londoners now 10 points behind league leaders Manchester City.

Thomas Tuchel will meet with Romelu Lukaku in the coming hours to discuss about his interview, feelings and behaviour looking for a solution. Chelsea are not commenting – waiting for manager decision. 🔵 #CFC

Club still not planning to sell/offload Romelu in January. pic.twitter.com/sqdLCzjuH3

As both Kai Havertz and Callum Hudson-Odoi failed to convince in centre-forward role, it was hard not to wonder how Lukaku would have fared against an out-of-sorts Virgil van Dijk at Stamford Bridge.

Having been critical of his role in the side and having upset the Chelsea support with his comments, it remains to be seen whether the door is left open for him to return to the squad.

Given the Blues splashed out £97.5m to sign him from Inter Milan last summer, is there even a side in Europe that is currently both capable and willing of signing him?