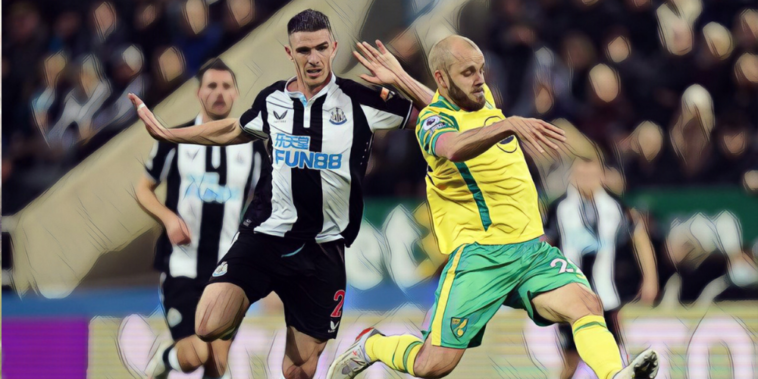 Following the latest round of Premier League action, we pick out some of the heroes and villains from the best and worst of the midweek fixtures.

There were wins for Manchester City, Tottenham, Chelsea and Leeds, though Newcastle’s search for an elusive first three points of the season will extend into a 15th game.

Heroes and Villains from the Premier League’s midweek action.

James Maddison’s renaissance continued in midweek as the midfielder found himself on the scoresheet once again, the Leicester playmaker approaching somewhere close to his best in recent weeks.

Maddison is an exceptional footballer when confidence is high and when on-song is amongst the most entertaining players in the division, with the 24-year-old drifting dangerously against Southampton and causing creative havoc.

Start your Thursday with this lovely goal from Madders 🪄#SouLei pic.twitter.com/QVbv28JlrL

Tino Livramento has earned plenty of plaudits this season, but the teenager struggled as Maddison drifted towards the left channel for Leicester in an entertaining 2-2 draw at St Mary’s.

Maddison’s goal was the moment of the match, a fine feint and clever finish inside the near post to make it three goals in his past three appearances.

Add three assists across that same period and it is an indicator of his influence in recent games, the midfielder beginning to shine despite a wealth of underperformance around him in Brendan Rodgers’ side.

Everton’s dreadful run of form reached a new nadir after a Merseyside derby thrashing to Liverpool, the visitors rampant to secure an emphatic three points at Goodison Park.

Not since 1982 have Liverpool scored four or more goals in an away league match against Everton, netting twice inside the opening 20 minutes before Demarai Gray’s goal handed the Toffees’ a lifeline.

Everton’s hopes of a fightback were ended following a howler from club captain Coleman, however, who gifted possession to Mohamed Salah who raced away and score Liverpool’s third of the evening.

The Irishman was hardly helped by Gray’s pass back to him, but it was Coleman who was caught and he paid the price after gift-wrapping a goal for the Premier League’s leading scorer.

The aforementioned Salah continued his electric start to the season with a clinical brace at Everton, the forward scoring twice as Liverpool thrashed their Merseyside neighbours 4-1 at Goodison Park.

Salah tucked away his first goal in sublime fashion after being released by Jordan Henderson, leaving Jordan Pickford with no chance as he bent a left-footed finish into the far corner.

The 29-year-old doubled his haul and provided Liverpool with breathing room in the second half, capitalising on Coleman’s mistake before racing away to score his 13th league goal of the campaign.

🤣 Mo Salah would still be the joint top scorer in the Premier League this season if you just counted his goals scored away from home. Unbelievable form. pic.twitter.com/AewGNZHdRx

It’s now 13 goals and eight assists from just 14 appearances so far this season, a phenomenal return that no Premier League player has ever bettered at this stage of a campaign.

Salah has also scored or assisted in 12 consecutive league fixtures and that run has shown few signs of stopping with the Egyptian the leading light of a free-scoring Liverpool side.

Newcastle’s clash with fellow strugglers Norwich was labelled a must-win for the division’s bottom side, but a 1-1 draw means the Magpies remain without a win after 14 league fixtures.

It was a costly and avoidable red card for Clark, whose unforced error gifted Teemu Pukki possession before hauling down the Finnish forward as he struggled to get back and recover.

What was Ciaran Clark thinking? 😬 pic.twitter.com/2u1Hi1ZX8u

Clark’s basic error was a nightmare start for Newcastle, but Howe will have been pleased with how his side regrouped in the face of adversity. Howe faces a monumental task to keep this side in the division, even given the investment that will arrive next month, with no side to have previously reached 14 games of the season without a win having ever avoided relegation.

Cristiano Ronaldo’s match-winning brace stole much of the headlines from Manchester United’s 3-2 win over Arsenal, but the performance of Diogo Dalot deserves acknowledgement following an encouraging showing from the right-back.

Dalot has endured a frustrating spell on the sidelines despite Aaron Wan-Bissaka’s poor form this season, with Ole Gunnar Solskjaer continually overlooking the Portugal international despite the former’s struggles.

Dalot’s defensive qualities have been questioned, but on his first league start of the season, the 22-year-old shone, producing a solid performance that included eight ball recoveries, four aerial duels won and three tackles.

The right-back provided an attacking outlet for his side all evening and was involved in Ronaldo’s first goal, releasing Marcus Rashford down the right with a clever reverse pass.

Dalot could hardly have done more to impress the watching Ralf Rangnick and deserves to retain his place ahead of this weekend’s clash with Crystal Palace.

“I don’t know where he goes from this performance.”

Those are the damning words of Thomas Tuchel after Saul Niguez’s latest sub-standard showing for Chelsea, the midfielder’s loan spell from Atletico Madrid showing no sign of improving after another chastening performance at Watford.

Saul was substituted at half-time of his first Premier League start for Chelsea, with the Spain international having not featured from the start since that win over Aston Villa in early September.

😵 Saul Niguez still has more league minutes for Atletico Madrid (200) than Chelsea (94) this season. More than twice as many…

Named as part of a rotated side at Watford, Saul again lasted only until the break after being given the runaround across the opening 45 minutes at Vicarage Road.

The 27-year-old was off the pace and picked up a yellow card, his Chelsea career one that already looks difficult to recover.

Antonio Conte believes Oliver Skipp has all the ingredients to become a ‘top midfielder’, with the academy graduate growing in stature at Tottenham this season.

Skipp produced his best performance of the campaign in the 2-0 win over Brentford on Thursday, as Spurs climbed to sixth after securing back-to-back Premier League wins.

The 21-year-old won six duels and produced a tireless display of tenacity and energy, whilst he showcased an improving presence on the ball against Brentford with a notable shift in moving possession forward quicker.

A player who will benefit a lot from working with Antonio Conte. pic.twitter.com/lkszvjoZjA

Conte was delighted with his showing, though insisted there remains work to be done for Skipp to fulfil his potential.

Brighton were not the first side to suffer at the hands of West Ham’s set-piece expertise this season and the Seagulls will no doubt be the last, but Robert Sanchez failed to cover himself in any glory as he routinely flapped at the Hammers’ dead-ball deliveries.

It took just five minutes for David Moyes’ side to open the scoring, with Sanchez all at sea as Tomas Soucek glanced home Pablo Fornals’ wicked delivery.

The corner was whipped in right towards the goalkeeper, perhaps intentional given the success West Ham have already had this season when troubling hesitant shot-stoppers.

Sanchez later saw a fractional offside and VAR save him from another costly error, as his attempted punch from another corner kick eventually fell at the feet of Michail Antonio to scramble home.

West Ham have proven a nightmare for goalkeepers this season and Sanchez will be relieved that Neil Maupay’s acrobatics ultimately rescued the Seagulls a point.