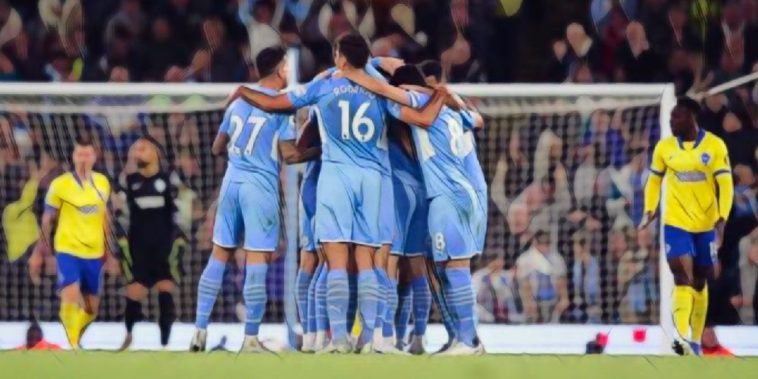 Manchester City moved back to the top of the Premier League following a 3-0 win over Brighton at the Etihad on Wednesday night.

Liverpool’s thumping victory over Manchester United on Tuesday saw the Merseyside outfit move two points clear at the top of the Premier League, with Man City facing a Brighton side who have beaten both Arsenal and Spurs in their last two outings.

City put in a poor performance in the first half at Wembley as they were dumped out of the FA Cup by Liverpool at the weekend, and they were once again distinctly off the pace during the opening 45 against the Seagulls.

The reigning Premier League champions did however get themselves in front seven minutes after the restart. Kevin de Bruyne drove his side forward from the halfway line, with his eventual pass somewhat fortuitously deflecting into the path of Riyad Mahrez before the Algerian’s scruffy effort took another deflection to help take it past Robert Sanchez.

12 minutes later and it was two, with goalscorer turning provider as Mahrez rolled the ball to Foden at the edge of the box from a corner. The England international took a touch before firing towards goal, though his effort once again took a deflection off Enock Mwepu to leave Sanchez helpless.

While City’s first two goals took vital deflections, there was nothing fortuitous about their third, Bernardo Silva curling a delightful first-time finish from the edge of the area after Oleksandr Zinchenko had won the ball as Brighton attempted to play out of the back.

Speaking after the game, City boss Pep Guardiola was pleased with his side’s display, and gave an update on some of the injuries currently being encountered by his side, with Nathan Ake the latest to limp out.

“It was a good test and we behaved exceptional. That is why we won the game,” he told BBC Sport.

“We didn’t let them play. Brighton have this quality. In the second half we found the goals that we could not find in the first half.

Very proud to have played my 300th game for this club. On to many more pic.twitter.com/x4e9QkdBNy

“Nathan Ake has a twisted ankle. It is not perfect but it was good to give minutes to Ruben. John [Stones] was a little bit tight. Hopefully nothing too bad but we will see tomorrow. Ruben is important. It is difficult seven weeks out to come back and pick up the rhythm. He is mentally so strong and that is why he show so many good things.”

Kevin de Bruyne meanwhile returned from injury to make his 300th appearance for the club, and Guardiola described the Belgian as ‘a special player and human being’.

“What a signing. The club sign him before I come here so a big congratulations to the club. A special player and human being. When fit and happy mentally like all of us and is fit to show his potential he is unstoppable in that position, in transition especially. He is playing the last part of this season amazingly.”

The win moves City back above Liverpool at the top of the table and ensures a top four finish, though the Catalan warned his players that they may need to win every single game to ensure they win a fourth title in five years.

“Now for the Premier League, we are not stupid. If we drop just two points, Liverpool will be champions. If we win all games we will be champions. The players know it. We know the tough games we have and we must try to perform like today and win all the games. If we do that we will celebrate, if not we will congratulate Liverpool.”