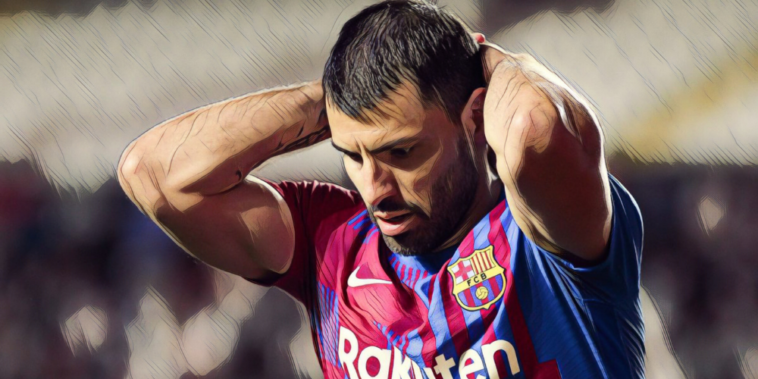 Pep Guardiola and Kyle Walker have sent well wishes to Sergio Aguero, after the former Manchester City forward was ruled out of action for three months for cardiological evaluation.

Aguero was substituted during Barcelona’s 1-1 draw with Alaves at the weekend with chest pains, receiving treatment on the pitch for several minutes before being taken to hospital.

The 33-year-old was making just his second start for the Catalans after arriving from City last summer and has now been ruled out for a period of at least three months as he undergoes medical tests.

Speaking ahead of City’s Champions League clash with Club Brugge tomorrow evening, Guardiola said everyone connected with the club is wishing Aguero a ‘safe recovery’ after a concerning situation.

“I sent a message to Sergio’s agent. It was difficult news for everyone and his family,” Guardiola told his pre-match press conference.

“We wish him a safe recovery, the time doesn’t matter. He is in very good hands, with doctors who will take care of him.

“If he comes back and it is possible to play again, good, but he needs to be careful and be safe for the rest of his life.”

Walker also spoke on City’s all-time record goalscorer and admits it was a ‘shock’ to see a former teammate taken ill.

“It’s a shock when it happens to anyone,” Walker said.

“I played with Christian [Eriksen] and it happened to him at the Euros. You think about them and the family. I’m glad Aguero is OK. With these things you have to take certain precautions.

“We’re all human in more ways than one. We make mistakes as every human does. And we put in good performances. Health is key. As long as Serg is OK. I know Christian is fine, I spoke to him two weeks ago. Hopefully we don’t see more of this.”