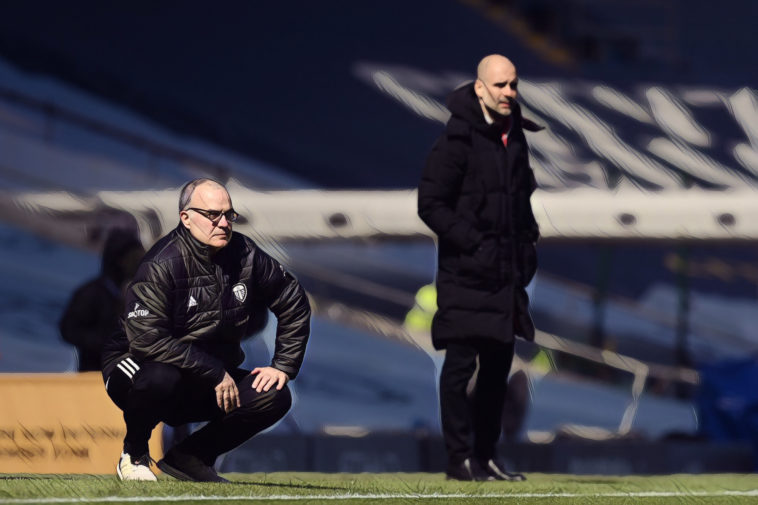 Pep Guardiola was left ruing his side’s lack of ‘control’, as league leaders Manchester City succumbed to a late Stuart Dallas’ strike in a 2-1 loss to 10-man Leeds United.

The former Barcelona boss shuffled his pack for the visit of Marcelo Bielsa’s side, making seven changes from the team that beat Borussia Dortmund in midweek, the major story seeing Nathan Ake make his first Man City start since Boxing Day.

Although the league leaders unsurprisingly dominated possession in the opening exchanges, it was the visitors who looked the more threatening, getting in at will down the hosts’ left-hand side through the in-form Raphinha.

Despite looking dangerous on the break, the visitors struggled to really find that piece of quality in the final third, while City wasted a handful of key opportunities, Raheem Sterling squandering a promising chance on his return to the starting lineup.

The breakthrough eventually came on 42 minutes, Helder Costa finding Patrick Bamford just inside the box, the striker teeing up Stuart Dallas whose effort found the back of the net after initially striking the post.

Just moments later, however, and the away side’s fortunes took a different turn, captain Liam Cooper shown a red card after a forceful challenge on Gabriel Jesus just before half-time, the Scotland international given his marching orders following a VAR review.

After an end-to-end first-half, the second period was, as expected, largely dominated by the hosts, with their man advantage making the difference as they probed relentlessly for an equaliser, while the away side were left largely camped on the edge of their own box.

That being said, Illan Meslier in the Leeds goal hadn’t been overly troubled despite that intense spell of pressure, before City’s dominance finally paid off with 15 minutes remaining, after good work from Bernardo Silva found Ferran Torres, the Spain international calmly slotting home from close range.

Man City attempted 29 shots against Leeds, the most by a losing team in a PL game since Arsenal in December 2017 (33, vs. Man Utd).

Every single outfield player was directly involved in at least one shot. pic.twitter.com/dM5BsQVhsY

To their credit, the 10-men of Leeds continued to commit bodies forward after conceding, with that bravery ultimately paying off as the visitors snatched a winner in stoppage time, Dallas once again the man on the scoresheet with a composed finish through the legs of Ederson after a brilliant breakaway.

That defeat is only City’s fourth loss in the league this season, with Guardiola admitting that his side failed to ‘create enough’ against a brave Leeds side.

“We played a real good game,” he told BBC Sport. “The goal we gave them, in behind, we were solid and make mistakes for a counter-attack.

“We did not control it. We did not create enough for the forwards. It is part of the game.

“In the last 10 minutes they had other chances, they fast and can do it. When they defend in the way they were you have to stop them running and we did not do that. The best moment we had in the game we make a mistake behind and we tried but could not score.

Man City are next in action in the Champions League against Borussia Dortmund on Wednesday night, before a huge FA Cup semi-final clash against Chelsea next Saturday.