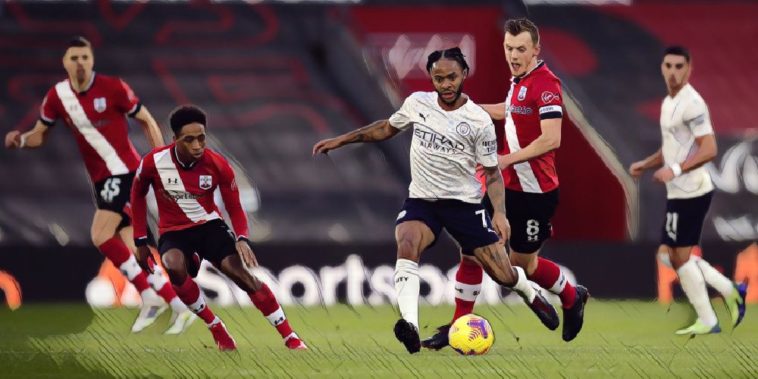 Raheem Sterling’s first-half strike would prove to be the winner as Manchester City edged out an in-form Southampton at St. Mary’s on Saturday.

Much of the narrative of Man City‘s early-season fortunes has been their uncharacteristic lack of goals, Pep Guardiola’s side coming into this weekend’s game having found the net just 18 times in their first 12 outings, despite creating their usual wealth of chances.

The early passages of play took on a similar pattern, though they eventually found the breakthrough in the 16th minute. Bernardo Silva found the overlapping Kevin de Bruyne down the right before the Belgian played in a first-time cross into the unmarked Raheem Sterling in the middle who got a good contact on the ball to beat Saints ‘keeper Alex McCarthy.

15 – Kevin De Bruyne has registered 15 Premier League assists in 2020, three more than anyone else, while only in 2017 has he assisted more Premier League goals in a calendar year (18). Elite. pic.twitter.com/X0UiA9DS7O

Following the opener, Southampton looked a dangerous threat at the other end, though a number of Saints chances went begging, with Danny Ings seeing a header drift wide under pressure from Ruben Dias, while Ederson made a good save from the England international.

Ralph Hassenhuttl’s side lost some of their attacking impetus after Ings went off before the interval with a knee injury, with his replacement, Nathan Tella, not managing to get a shot off, while Che Adams’ best effort saw his second-half header hit the side netting from a narrowing angle.

City continued to fashion chances at the other end, with Ilkay Gundogan’s goalbound effort from the edge of the area drawing a good save from McCarthy, while the visitors were once again guilty of wastefulness as a late Riyad Mahrez effort was blazed over the bar.

During his time at Man City, Guardiola’s side has been accused of being soft at the back, though they now have the best defensive record in the league, keeping the most clean sheets (6) and conceding the fewest goals (12) and the Catalan boss was full of praise for his backline, picking out John Stones for praise alongside summer signing, Dias.

Goals scored by Southampton at home in the Premier League this season:

Man City are the first away side to keep a clean sheet at St Mary's. ⛔️ pic.twitter.com/tYEB5RI0lj

“We had the momentum in the second half, but we couldn’t score and we nearly suffered,” he told Match of the Day.

“They put a lot of players inside; they provoke you to be narrow. It’s difficult. They don’t allow you to be compact, that’s why they are so good. That’s why they’re creating problems.

“They have the best free-kick taker I have seen in my life in [James] Ward-Prowse. Their position in the table, Ralph [Hasenhuttl] is doing an excellent job.

“It’s a good result for us, it will help us a lot going into our EFL Cup game.

“Defensively we were excellent. Last season we struggled a lot. Ruben [Dias] has helped us a lot. John [Stones] the last few games has been exceptional.

“We continue to play more and more to create more chances.

“I’m jealous of Southampton, they can have supporters, we cannot. Everyone can agree we’d love to have fans back. But we have to be alert. We have to be careful.”

Next up for City is an away trip to face Arsenal in the Carabao Cup quarter finals as they look to win the trophy for a fourth successive season.

See also – Five of the Premier League’s most misunderstood players