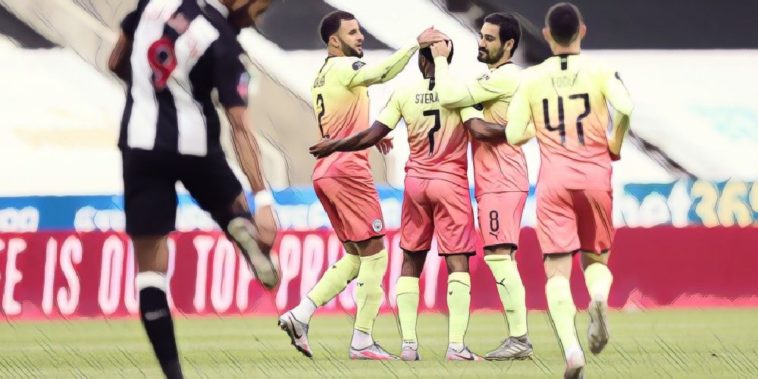 Manchester City progressed to the last four of the FA Cup with a 2-0 win over Newcastle United at St. James’ Park as they look to win the tournament for a second successive season.

Fresh off the back of their defeat to Chelsea in midweek – a defeat which finally saw them surrender their Premier League crown to Liverpool – Man City came out with a renewed focus and vigour, and absolutely dominated a Newcastle side who struggled to even get a touch of the ball, let alone string any kind of passages of possession together.

City had a whole host of chances in the opening exchanges, though were unable to break down a packed Magpies defence, who at times, were pinned back inside their own penalty area.

However, in the 37th minute, the pressure finally told, with the FA Cup holders being awarded a penalty for a push by Javier Manquillo on Gabriel Jesus which was well-spotted by referee Lee Mason, the resulting spot-kick being comfortably converted by Kevin de Bruyne, who was celebrating his 29th birthday.

Sterling whips it into the bottom corner 🔥#EmiratesFACup #NEWMCI pic.twitter.com/J6ClxDheXF

Newcastle, who last won the Cup back in 1955, came out with an improved purpose in the second-half, and having scored almost immediately after coming on against Aston Villa in midweek, Dwight Gayle almost repeated the trick following his 65th-minute introduction, though the striker blazed his effort over the bar following some good work down the right by Allan Saint-Maximin.

Within minutes of Gayle’s missed chance, City made Newcastle pay, England international Raheem Sterling receiving the ball from Phil Foden 30 yards from goal, drifting inside onto his right foot and coolly curling it past Karl Darlow from just outside the box.

City continued to dominate but failed to add to their tally, and speaking afterwards, Pep Guardiola insisted it wasn’t easy to break down Steve Bruce’s defensive side, while admitting they are already preparing for their Champions League last 16 second leg against Real Madrid, which is not to to be played until early August.

“It was not easy to attack against a team defending so deep but it was a good performance,” the Catalan told the BBC. “I am happy to go back to London, to Wembley.

“After the defeat against Chelsea, now in the Premier League, we are struggling to focus. We are close in the [race to qualify for the] Champions League and there is a gap [to fifth-placed Wolves].

“We are at Wembley again and we were winners last season so that is so good. We are of course preparing for Madrid now.”

Guardiola will once again come up against his former assistant Mikel Arteta with City being drawn to play against Arsenal in the semi-final next month, with Manchester United or Chelsea awaiting the winners in the final on August 1st.

Read – Tweets of the Week: Liverpool, Neil Warnock and Bale the troll