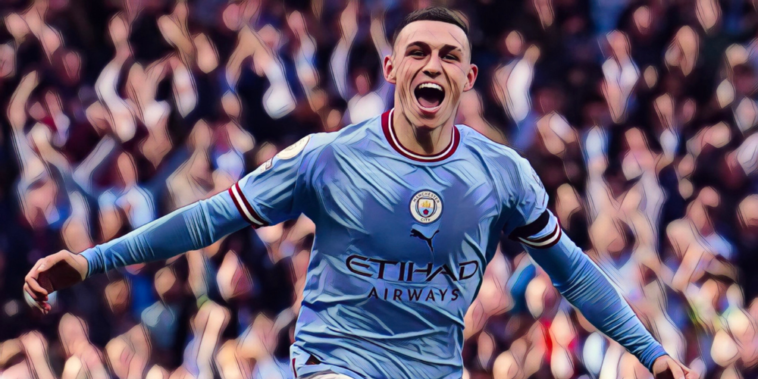 Pep Guardiola has agreed with comments made by Kevin de Bruyne about Phil Foden eventually developing into a central midfielder.

Foden was one of the stars of the show as Manchester City hit Manchester United for six in Sunday’s derby, with the Stockport-born star netting his first senior hat-trick against the club’s closest rivals.

During that game, Foden operated out on the right wing and drifted inside, though Kevin de Bruyne said that the 22-year-old’s long-term future is likely to be in the heart of midfield.

“He will improve because he’s only 22. I know at 22 I wasn’t the player that I am now,” De Bruyne said after the 6-3 win over United. “He’s so good so it’s trying to find consistency. He’s been playing unbelievable for us so he will be here for a long time.

“What is he good at? The better question is what is he not good at. He can play in a lot of different positions. I think he will end up playing centrally in my opinion. But in this moment in time it is maybe a little bit better for him on the wing. Have more freedom and fewer instructions so he flows into the game.

“I eventually see him playing more centrally when he gets older and gets more stamina. It’s all about the little details to just find more consistency in the performances.”

Speaking ahead of Wednesday’s Champions League clash with FC Copenhagen, Pep Guardiola agreed with De Bruyne’s thoughts, saying that the boyhood City fan would be capable of playing in five different positions.

“I agree with Kevin, hasn’t played there many times. Phil can play five positions, even play as a left-back,” the former Barcelona and Bayern Munich boss said at his pre-match press conference.

“In the middle have to pay a bit more attention. Some aspects, his unbelievable instincts. In the middle, the sides is easier.

“With the ball, especially without, he has to improve. It’s normal. His age and desire to learn he will do it, no doubt.”