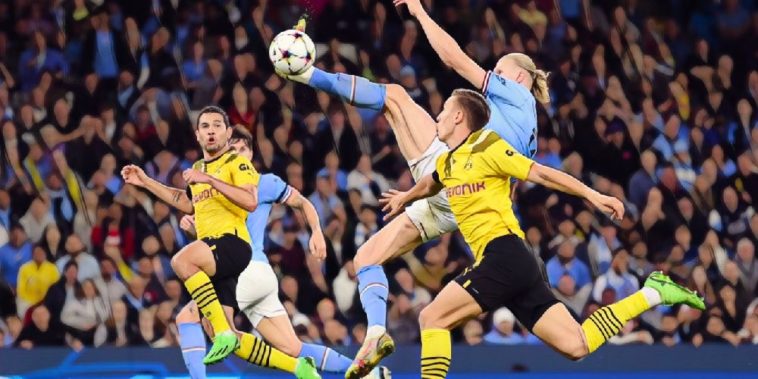 Manchester City scored two goals in four minutes to earn a 2-1 victory over Borussia Dortmund in the Champions League, as Erling Haaland scored yet another goal for the winner.

Man City had romped to a 4-0 win over Sevilla on Matchday one of the Champions League last week, while Dortmund beat FC Copenhagen 3-0 in their Group G opener.

The duo had locked horns in last season’s quarter-finals, with Man City winning both legs by a 2-1 scoreline, though Erling Haaland and Manuel Akanji have both since swapped allegiances this summer.

The opening 45 minutes at the Etihad saw Manchester City have the vast majority of possession, though they failed to properly threaten the Dortmund goal, with the Germans seemingly setting up to frustrate the hosts.

Dortmund grew in confidence as the game went on, and 11 minutes into the second half, the Bundesliga side took the lead. A corner from the right was only cleared as far as Marco Reus, before the Dortmund captain curled an inviting ball back into the area. England international Jude Bellingham got in front of his man to glance his header beyond Ederson.

City didn’t manage to muster a single shot on target until the 80th minute, but when they did, they found the back of the net from one of the more unlikely of goalscorers. John Stones picked up the ball 20 yards from goal, before unleashing a thunderous finish into the top corner, though Alexander Meyer really should have done better at his near post.

Four minutes later and City completed their comeback. Joao Cancelo produced a superb outside-of-the-boot cross into the boss, before Mr Inevitable, Erling Haaland, produced an audaciously acrobatic finish to net against his former side.

A ridiculous assist from Cancelo, an even more ridiculous finish from Erling Haaland 😍

City were below their usual best, but still managed to find a way, and speaking after the game, Pep Guardiola said he isn’t a fan of his side being forced to come from behind.

“We are used to doing it lately. I don’t like it,” he told BT Sport.

“We played in the wrong gear today. No aggression. We were passive. The moment we changed rhythm with Phil [Foden], Bernardo [Silva] and Julian [Alvarez], we changed our pace and scored two excellent goals.

“I’m pretty sure the way were playing in the first half John [Stones] wouldn’t have had the courage to try his shot but we had the rhythm and momentum and we said OK it’s going to happen. It was exceptional. I’m so happy for him.”

Asked about Erling Haaland’s sensational winner, Guardiola likened it to a strike by Johan Cruyff against Atletico Madrid back in 1973.

“What a goal. I remember a long time ago in Barcelona Johan Cruyff scored one quite similar against Atletico Madrid. It’s nice Erling emulated Johan Cruyff.”

Guardiola described Dortmund as an ‘exceptional’ side, but was pleased with his side’s ‘resilience’, despite not being at their best.

“They are an exceptional team. We knew it. We weren’t good enough today. At the same time it’s always good to have that resilience – let’s go, let’s go, let’s go. Having Julian and Erling in the box, having that alternative, it works.”