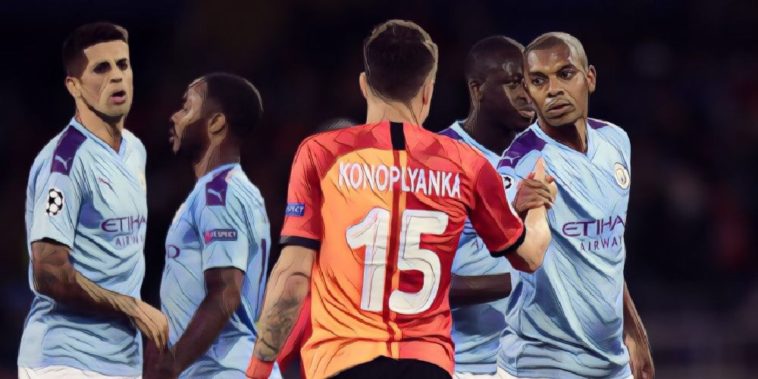 Manchester City bounced back from their shock 3-2 defeat to Norwich at the weekend with a Champions League win over in the Ukraine, comfortably beating Shakhtar Donetsk 3-0.

He may not feature as much as he may like, but one-time club-record signing Riyad Mahrez played a big role in Man City‘s win, opening the scoring into an unguarded goal following an Ilkay Gundogan strike in the 24th minute, before returning the favour for the Germany international who doubled City’s lead with seven minutes left to play in the first half.

In what was a thoroughly dominant performance from the Premier League champions, Gabriel Jesus wrapped up the first three points of City’s European campaign in the 76th minute following a swift counter-attack.

Despite the attacking prowess his side showed, City boss Pep Guardiola was quick to praise his makeshift defence of Fernandinho and Nicolas Otamendi, as well as highlighting his side’s outstanding form in 2019 following their weekend blip in Norfolk.

“We saw the results yesterday and today, we know how difficult the Champions League is. We defended really well and we created chances,” Guardiola told BT Sport.

“To start with three points away is so important, it is in our hands to reach the last 16.

“When you win the manager makes the right decisions, when you lose the wrong decisions. We lost one game in eight months and we will not doubt who these players are. It is a joy to be their manager.

“We prepare for the next one. We don’t have many choices in defence, Fernandinho is the only one I have. He is a clever player and an incredible guy. He did it well.”