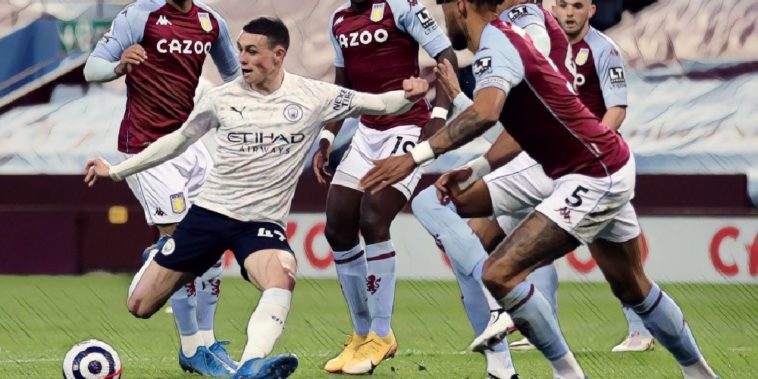 Manchester City moved to within three wins of reclaiming the Premier League title after coming from a goal down to secure a 2-1 win over Aston Villa.

It was an absolutely rapid start to the game as a quickly taken Aston Villa free-kick caught Man City completely by surprise, Oli Watkins chasing the ball into the left channel before squaring it to the onrushing John McGinn who produced a first time finish past Ederson to give his side a shock lead after 20 seconds.

City would, however, pull themselves level in their trademark style midway through the first half, Foden playing the ball out to Riyad Mahrez on the right, who fed the overlapping run of Bernardo Silva. The Portuguese played the ball back in the box to find Foden, who had continued his run, before firing his boyhood side level.

The Citizens would pull themselves ahead in the 39th minute, a Bernardo Silva cross being glanced home by the head of Spanish midfielder Rodri, Villa ‘keeper Emi Martinez perhaps at fault after attempting to punch the ball rather than staying on his line.

The Premier League leaders would however have to play the entirety of the second half with 10 men, defender John Stones being shown a straight red in the 44th minute for high and late tackle on Jacob Ramsey, a card that is set to keep him out of the weekend’s Carabao Cup final.

However, Villa’s man-advantage would only last 13 minutes into the second period, Matty Cash being shown a second yellow card for a late lunge on Phil Foden, the right-back having only been booked for a challenge on the same player three minutes previous.

With both sides down to 10, City would enjoy large swathes of the ball as they saw the game out with almost total control, extending their lead over Manchester United back to 11 points having played a game more than their cross-city rivals.

Speaking after the game, Pep Guardiola was delighted with his side’s performance, declaring the Premier League as the ‘most important’ title for his side.

“It was not the start that we imagined, but after that, we played so good,” he told Sky Sports. “After 10 against 11 and after Cash was sent off, it was a really good performance.

“The Premier League is the most important title to win. 11 months, fighting, fighting. Next one, Crystal Palace, we are going to try to get it closer.

“It wasn’t a slow start, to realise a slow start you need five or ten minutes, the goal was after 20 seconds. It was a fault and then sometimes you need to realise how to react in that situation, and with 10 against 11, we played really well.

“When it was 10 against 10, we controlled the game with the players that we had, with Riyad, Bernardo, Gundo[gan], Phil [Foden] and Rodri, we finished the game.”

The Catalan was furious on the touchline when the referee brandished the red card for Stones’ late challenge, insisting the Barnsley born defender had no ‘intention’ in his challenge.

“It was late but the intention was no. Now because we have won I am happy. If we had lost I’d be angry. It’s a good lesson for the final on Sunday.”

Phil Foden was once again the star man for City, and Guardiola discussed the 20-year-old’s ‘influence’.

“This guy is growing. He is making steps forward all the time. His influence in our games is massive right now. Scored a goal, provoked the two yellow cards. He’s becoming a serious player. Phil right now is becoming such an important player. His influence in the final third is so important. He can play wide, can play inside. He is so aggressive with the ball.”