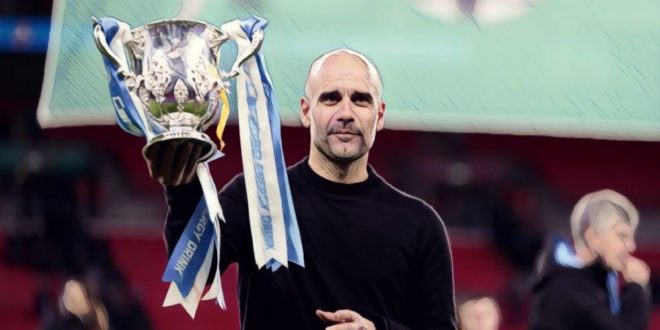 Man City secured English football’s League Cup four a third consecutive season courtesy of a 2-1 victory at Wembley, goals from Sergio Aguero and Rodri delivering the latest piece of silverware to the ever-growing collection at the Etihad.

Having won the domestic treble last season, the club have now won eight of the past nine domestic trophies available and Guardiola has lavished praise upon his side who he says continue to make history.

Since the start of the 2017/18, Manchester City have won 8/9 domestic trophies. 🏆 pic.twitter.com/8IdLEHa3mL

“Since we started to win, the last nine [domestic] competitions we played, we won eight,” he told BBC Radio 5 Live.

“That is awesome. No club before in the history of domestic trophies, not counting Europe, won the amount of titles in a row we have won.

“Not even the biggest Liverpool in the 80s, the biggest Manchester United with Sir Alex Ferguson or Jose Mourinho, or Arsene Wenger [at Arsenal].

“These clubs were amazing but were never able to win in the last nine titles, domestic eight.”