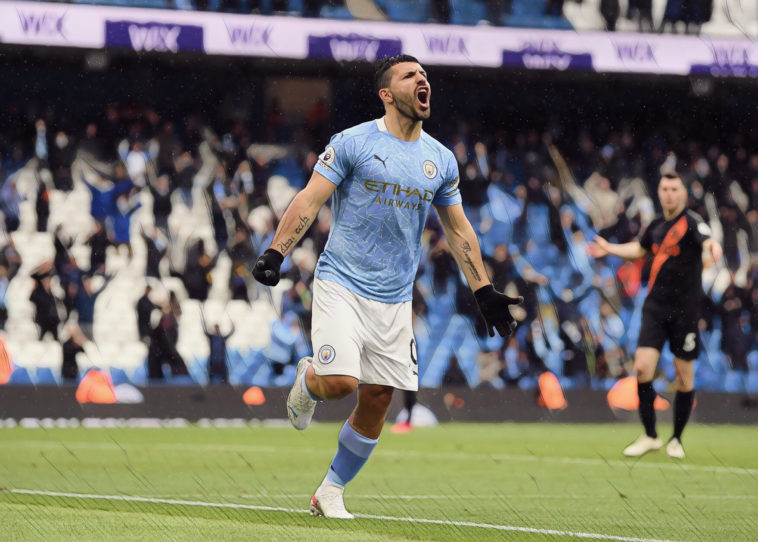 Sergio Aguero scored twice on his Etihad farewell, as Manchester City rounded off their title-winning season in style with a 5-0 thrashing of Everton.

With just a week to go until the Champions League final showdown with Chelsea, Pep Guardiola opted to name a full-strength side for the visit of Everton, departing club legend Aguero starting on the bench on what was his final farewell in front of the returning Man City crowd.

On a day in which the champions were set to be handed the Premier League trophy, the hosts got the party started early with two goals inside 15 minutes, the ever-impressive Kevin De Bruyne beautifully curling home from just outside the box for his side’s first, before Gabriel Jesus added a second minutes later, the Brazilian firing into the bottom corner from close range.

With the hosts in complete control, they extended their lead just after the break through Phil Foden, the England sensation shifting the ball onto his right foot inside the area, before lashing past compatriot Jordan Pickford.

Everton’s misery was compounded even further with less than 20 minutes play, as substitute Aguero got the goal that the home support was desperate to see, the Argentine poking home after working space for himself superbly inside the box.

City’s record goalscorer then added to his tally just minutes later in typically lethal fashion, the 32-year-old leaping well to bury a header into the bottom corner.

That proved to be the fifth and final goal of the match for Guardiola’s side, with the club going on to collect the Premier League trophy in front of their own supporters on a rain-soaked afternoon at the Etihad.

In what’s been a hectic and pandemic-impacted season, the former Barcelona boss admitted that it made it ‘mega special’ to come out on top as title winners.

“It’s completely different without people, we are so lucky to have people when we lift the trophy, it’s not full but it’s something. It’s so much better,” he told Sky Sports.

"He is a special person for all of us. He is so nice. He helped me a lot. We cannot replace him. We cannot." 😢

An emotional Pep Guardiola is reduced to tears when asked about Sergio Aguero, who will leave Manchester City this summer.https://t.co/COVNqfr9Dr #MCFC pic.twitter.com/PthCDZVBhI

“Every title is nice, this one is different because of the pandemic and the problems that we have all had. That makes it mega special.”

As well as the title celebrations, the game’s other major story was the emotional farewell of City legend, Sergio Aguero, the former Atletico Madrid striker netting a quick-fire double off the bench on his final Etihad appearance.

While there would be no hat-trick for the soon to be departing forward, his brilliant brace was a fine way to end a stellar ten-year spell in Manchester, with an emotional Guardiola full of praise for the ‘special’ Argentine.

“We love him so much – he is a special person for all of us. We can not replace him. There are many players who have helped us here, he showed his quality in those thirty minutes.”

After clinching a hard-fought third title in just four seasons, Guardiola pointed to his side’s win over Chelsea back in January as a real defining moment in the season.

“Win games, game after game. I think when we won at Stamford Bridge we realised that suffering in the last month, the performance we played there with just 14 players we realised we are still here, we can still do this. We are still here. I think December until March we won all the games in all competitions. This is when we became champions.”

Having recently signed a new contract to stay at the club until 2023, the 50-year-old is looking forward to a period of ‘stability’ with his team.

“The reality is the players know we will have stability. Maybe we showed that next season we are the same people we will be working together, they realised this manager will stay another year, we keep running, keep fighting.”

Following that final day thrashing, City now prepare to take on Chelsea in their maiden Champions League final appearance next week in Porto.

“It’s a dream come true, for this club, other people have been there, but we haven’t, it’s our first time and we are going to give everything and we want to win it. It’s not enough just being there we want to win it, it’s on the lads.”