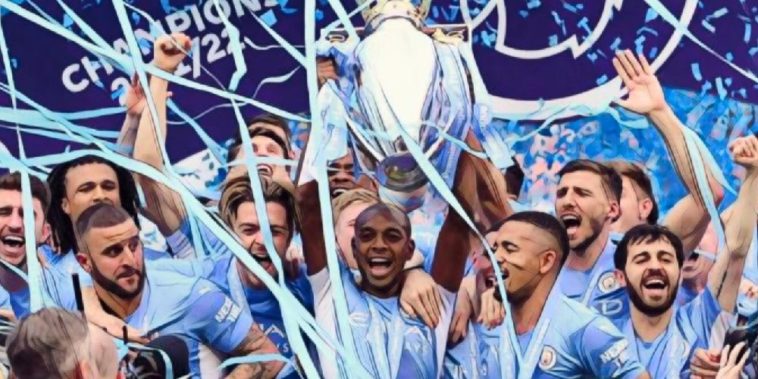 Manchester City produced another remarkable turnaround to clinch the Premier League title by a single point.

City came into the game knowing that a win over Aston Villa would crown them Premier League champions for a fourth time in five years, with Liverpool a point behind and with a worse goal difference ahead of their game with Wolves.

The pre-match narrative had centred around Steven Gerrard’s potential influence in the title race with his boyhood club, Liverpool, needing a favour from their favourite son in their pursuit of a final day turnaround.

City dominated the early proceedings in East Manchester, but didn’t look their usual slick selves, and in the 37th minute, the league leaders fell behind as Matty Cash got in front of his man to head past Ederson in what was Villa’s first attempt of the match.

The Blues didn’t register their first shot on target until first half stoppage time, though were still ahead in the title race on goal difference as Liverpool went into the break level with Wolves at Anfield.

City started the second half with more intensity, though in the 69th minute, the Etihad was stunned into silence as they saw their side fall further behind. A Robin Olsen goal-kick was flicked on by Oli Watkins to pick out Philippe Coutinho, before the former Liverpool man fired into the bottom corner.

Pep Guardiola brought on Raheem Sterling and Ilkay Gundogan in the second-half, and the pair combined to reduce the arrears as the German nodded home at the back stick from Sterling’s cross.

Left back Oleksandr Zinchenko had also been brought on at half-time in place of Fernandinho, and two minutes after Gundogan’s goal, the Ukrainian cut the ball back to find Rodri at the edge of the box, before the Spaniard fired into the bottom corner to send the Etihad wild.

10 years ago, Manchester City famously won the title on the final day after coming from behind to beat QPR with that Aguero winner, and in what was another sensational turnaround, Ilkay Gundogan then netted his second of the afternoon after Kevin de Bruyne pounced on a loose ball before picking out an inch-perfect pass.

Meanwhile, down the road at Anfield, Liverpool netted two late goals to run out 3-1 winners, though it would matter little as City held on to claim yet a sixth Premier League crown.

Speaking after the game, Pep Guardiola hailed his side as ‘legends’ following their dominant decade at the peak of English football.

“The last game is always special, a lot of emotion. Aston Villa gave everything but the first goal changed everything. We had to handle it,” he said to Sky Sports.

“We are legends. When you win the Premier League in this country four times in six seasons it is because these guys are so, so special. We will be remembered.

“Winning at home in front of our people is the best. The moment we equalised we had the feeling we had the chance to score the third.

“The magnitude of the achievement is related to magnitude of our rival and I have never seen a team like Liverpool in my life. Congatulations to Liverpool they have made us better and better each week.

“I don’t have the energy or desire to think about next season now. We are champions again.”