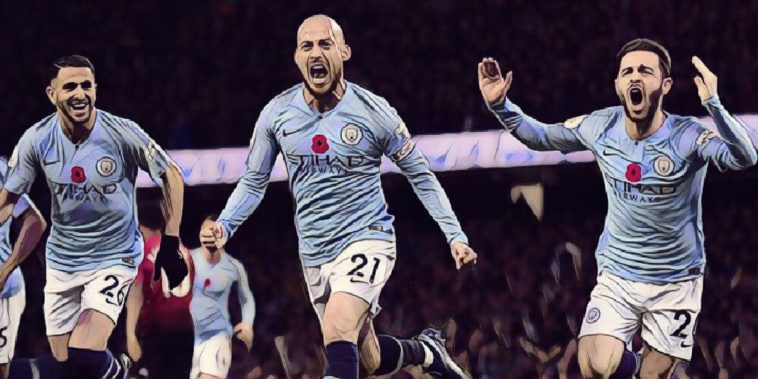 Pep Guardiola has praised the midfield duo of David Silva and Bernardo Silva, as well attacking player Raheem Sterling after all three were instrumental to the outcome of the Manchester derby.

Man City ran out 3-1 winners at the Etihad this afternoon in their much anticipated game against their Manchester rivals with goals from David Silva, Sergio Aguero and Ilkay Gundogan.

Manchester United winger Anthony Martial would score a second-half penalty to make the scores 2-1 to set up the potential of a tense finale, but the result never seemed in doubt, with the host dominating virtually every recordable statistic in the game.

Key to the City performance was the ever-influential David Silva, and when asked about his influence on the game, Pep Guardiola said that the Spaniard ‘played top’, as well as picking out Bernardo Silva and Raheem Sterling for praise.

“It is not the first time he has played in the derby so he is very experienced but he played top. Bernardo [Silva] was also incredible and Raheem [Sterling] was incredible in his effort too,” Guardiola told BBC’s MOTD.

“Everybody was good, especially in the second half.”

Man City remain top of the Premier League table with 32 points after 12 games.