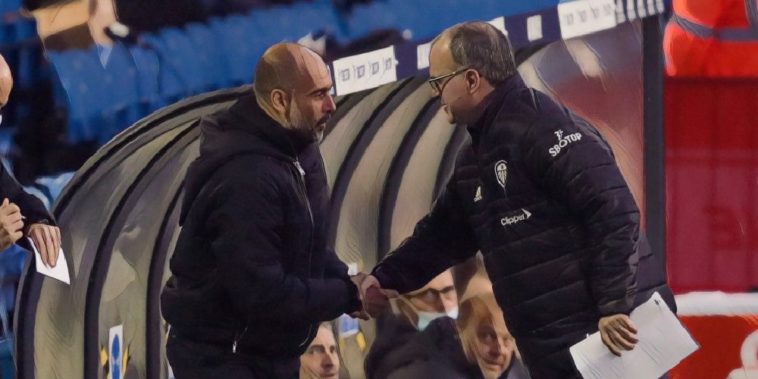 Pep Guardiola and Marcelo Bielsa were both left relatively satisfied as Leeds United and Manchester City played out a hugely entertaining 1-1 draw on a wet afternoon in West Yorkshire.

Having slipped to a shock 5-2 loss in their last Premier League outing, Manchester City came out of the traps with the look of a team who had a point to prove. Last season’s runners up very nearly took the lead in just the third minute, Kevin de Bruyne shaping to pump a free-kick from the left into the box only to whip his strike towards the near post, Leeds ‘keeper Illan Meslier being spared from embarrassment as the Belgian’s effort rattled back into play off the post.

City piled on some relentless early pressure to bring out some resolute defending from the hosts, who, on a number of occasions, were forced to throw their bodies on the line to prevent themselves from falling behind.

However, the pressure finally told in the 17th minute, Raheem Sterling drifting in from the left before stroking the ball past Meslier into the bottom corner from the edge of the box, City looking like they would run away with the tie.

A century for the Citizens. 💯 pic.twitter.com/RBO00MC6lp

After the goal though, Leeds eventually started to get their Bielsa-ball brand of football underway, and 14 minutes in the second half, they got the leveller that their football deserved. The usually reliable City ‘keeper Ederson fumbled a whipped corner, the ball dropping to Leeds’ summer signing Rodrigo – only introduced three minutes previous – who tapped the ball home.

After that, any tactical instructions that had been dished out by the dugout’s tacticians seemed to go firmly out of the window, the game turning into an end to end session of attack v defence.

Both sides spurned opportunities to take the lead – the game seeing a whopping 35 shots – with Man City putting a late squeeze on the Yorkshire side as they looked to come away from Elland Road with all three points.

As it was though, City – who are currently without both Sergio Aguero and Gabriel Jesus – were hugely wasteful in front of goal, with only two of their 23 attempts ending up being on target, although Pep Guardiola was quick to recognise what a hugely entertaining spectacle of football.

“That was good, huh?” he told Sky Sports. “When both teams want to attack, it’s a good game. We made an incredible first 30 minutes when we could have scored the goals we needed.

“The team, for the position we’re in, showed incredible behaviour. Unfortunately, they couldn’t win, but we go from here. If we were complaining because of absentees, we couldn’t play the way we played today.

This moment between Pep Guardiola & Marceloa Bielsa at full-time! ❤️

“Leeds put a lot of players behind our midfield line. After that, they attacked incredibly quickly with fast players outside. It’s not easy to play against them. They’ve showed how good they are.

Despite City’s hugely superior number of chances, it was Leeds who shaded possession and completed more passes than their usually dominant opponents, but Marcelo Bielsa admitted it would have been unfair if his side had come away with all three points.

“The start and the end were with City and the end of the first half and the beginning of the second half were a bit better for us,” Bielsa told Match of the Day.

“For them to be superior to us is pretty easy for them, it doesn’t require much effort, whereas for us it requires us to go to the limit to be on their level.

“We couldn’t take the ball off them and they were taking the ball off us very easily. We did it with a lot of effort, a lot of aggression to win the ball back and the confidence in our game grew.

“It wouldn’t have been fair if we had won the match, it would’ve been possible, but not fair.”

The result leaves Leeds fifth after their first four games back in the top flight, while Man City sit 11th on just four points, though they have played a game fewer going into the international break next week.