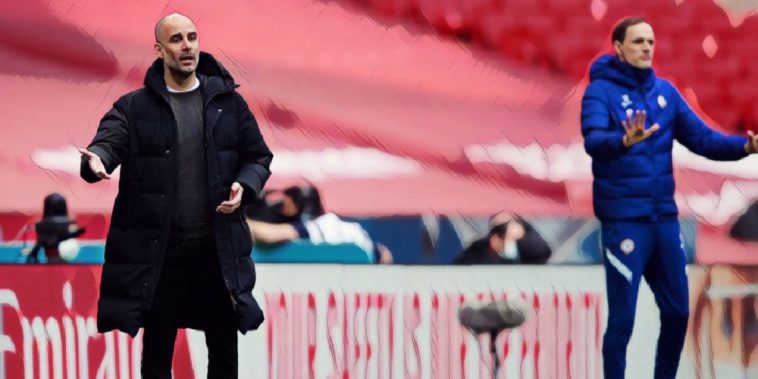 Manchester City’s hopes of landing an unprecedented quadruple of trophies was ended as they were dumped out of the FA Cup following a 1-0 loss to Chelsea at Wembley.

Pep Guardiola made eight changes to the Man City side that beat Borussia Dortmund on Wednesday, and it was perhaps because of that that Chelsea settled into the game the quickest, the London side seeing an early Ziyech goal ruled out following a swift Timo Werner break down the left.

Both sides have become accustomed to enjoying plenty of possession under Pep Guardiola and Thomas Tuchel respectively, and it would turn out to be an even and tactically intriguing first half, although it wasn’t particularly exciting, with neither ‘keeper troubled.

Chelsea would however take the lead within 10 minutes of the restart, and the goal was almost a carbon copy of the disallowed effort early in the contest, Werner this time staying onside as he scampered in behind the City defence before squaring it to Ziyech who had the simplest of tasks in tucking the ball home.

City ‘keeper Zak Steffen was partially at fault for the Chelsea goal, coming off his line to close down Werner’s run, though the American made a crucial save to deny Ziyech minutes later to keep the score at 1-0.

City notably improved after Guardiola replaced the relatively anonymous Ferran Torres with Ilkay Gundogan just after the hour mark, although while they really forced Chelsea back they still struggled to properly test Kepa Arrizabalaga.

The Stamford Bridge outfit would see another goal ruled out as the game approached added time, though it would matter little as they held on to book their place in a fourth FA Cup final in the last five seasons.

Speaking after the game, Pep Guardiola admitted his side didn’t create many clear cut chances’, but felt they created more than the winners.

Blue is the colour. #FACup pic.twitter.com/4Dq4QFAbHV

“We played a good last 15 minutes. We had struggled to find our place in the pockets but congratulations to Chelsea, tight game,” he told BBC Sport.

“We arrived sometimes in that position but after that we didn’t create.

“We conceded the goal but after we reacted well, especially after Phil Foden and Ilkay Gundogan came in. The team that defends with eight players in the final third it is not easy. This type of game the margin is so tight.

“In general we controlled well. We didn’t create many clear cut chances but we arrived more than them. They went through so congratulations [to them]. The second half was good.

“They made a goal from a counter attack. We didn’t create much in the final third and make many one versus one actions. But in general it was a tight game and anything can happen in these types of game.

“They defended well and are a strong team. I know how we reacted in the second half and it was good. We have not had a midweek free for eight months.

“We have played a lot of games and it will continue. Now it is the Premier League, the Carabao Cup next week. It’s just one more game.”

The Etihad outfit were dealt an early blow within minutes of the second half getting back underway, with Kevin de Bruyne being forced off with an ankle injury, and the Catalan suggested the prognosis may not be good for the mercurial Belgian.

“It doesn’t look good, he has pain. We will see. Tomorrow he will have a test.”

Next up for City is a trip to the Midlands to face Aston Villa, before taking on Tottenham in next weekend’s Carabao Cup final which will be held in front of 8,000 fans as part of a government test.