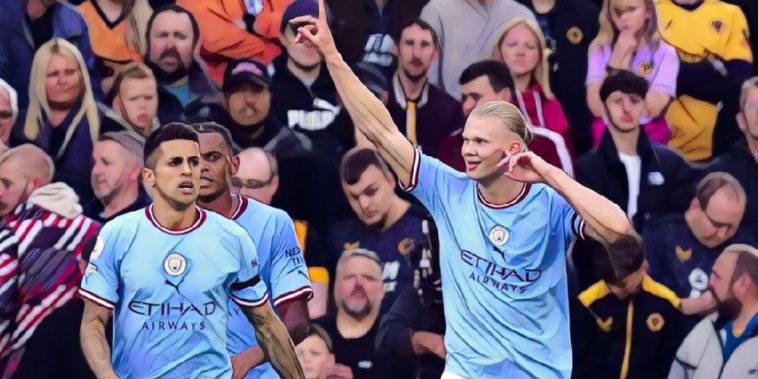 Manchester City barely got out of third gear as they cruised to a 3-0 win over a 10 man Wolves side as Erling Haaland continued his goal-laden start to life in England.

City wasted no time to get the ball rolling and opened the scoring after just 55 seconds, Kevin de Bruyne went on an overlapping run down the right before putting in an inviting delivery towards Erling Haaland. The cross just evaded the run of the Norwegian goal machine, but it was however met by Jack Grealish who touched home from close range for his first goal of the season.

Just after the 15-minute mark it was 2-0, with that man Haaland getting what is becoming an ever customary goal. The 22-year-old received the ball and drove towards the Wolves defence who stood off him, before he fired home from the edge of the box – his 14th goal of the season already

Wolves’ task always looked like an uphill one, and it got all the more difficult as summer signing Nathan Collins recklessly lunged into goalscorer Grealish with a high boot to the abdomen to earn himself a red card and an early bath with 55 minutes still to play.

Despite being a man light, Wolves did begin the second half with a bit more purpose in their play, but having got themselves in some decent positions, were sorely lacking up front, with Raul Jimenez, Sasa Kalajdzic and Diego Costa all unavailable.

With just over 20 minutes to play, City extended their lead, and once again Kevin de Bruyne was influential in the move. In a similar routine to their first, the Belgian started the move before receiving it back after going on an overlapping run down the right. His ball into the box picked out the run of Phil Foden who steered the ball into the bottom corner to absolutely make sure of the points.

The result moves the Champions back to the top of the Premier League ahead of Arsenal’s trip to face Brentford on Sunday, and speaking after the game, goalscorer Grealish thanked Pep Guardiola for his faith in him, before saying he wants to add more goals and assists to his game.

“It was a long time coming and nice to get off the mark,” he told BT Sport. “Rightly so people have been asking questions, I should be scoring more and getting more assists.

“I am always going to have people talking about me with the money that was spent on me, but all my career I haven’t scored enough goals. I do want to add that to my game.

“It is nice when Pep defends me. He has been brilliant with me. I probably have to thank him because he gave me the opportunity today after my performance on Wednesday because it probably wasn’t the best. I am thankful to him.”