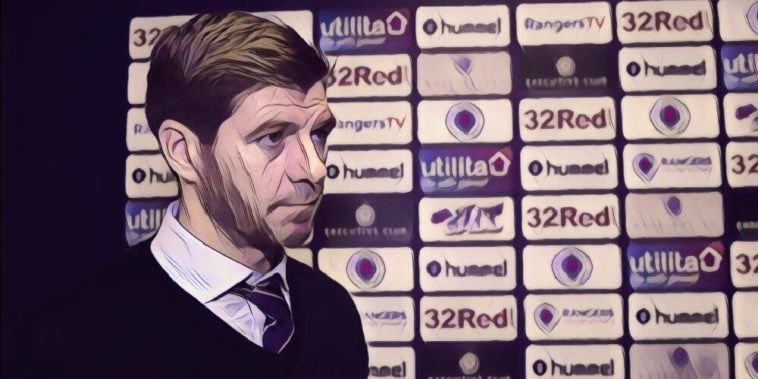 Rangers manager Steven Gerrard believes his side ‘deserve the criticism’ that has come their way following a 2-1 defeat to Kilmarnock last night.

The Gers lost vital ground to Celtic in the title race, after surrendering an early lead at Rugby Park.

36-year-old debutante Jermain Defoe had put the away side ahead on 12 minutes, only to see Kilmarnock gifted an equaliser after a defensive howler from Joe Worrall allowed Eamonn Brophy in on goal ten minutes later.

Northern Ireland international Jordan Jones – who will move to Ibrox in the summer – smashed home a 66th minute winner for Killie with a lovely strike from just over 20 yards, as Steve Clarke’s men climbed above Rangers into second place in the table.

Speaking after the game, Gerrard said that he struggled to find any positives from the performance.

“We got a lot of praise for beating Celtic. We won every single key individual battle in that game. I’m struggling to find one of them tonight. So we deserve the criticism,” Gerrard told Sky Sports.

“It’s even more painful because we had so much control in the first 15 minutes of the game. One moment had a huge effect on us and that’s a concern.

“It is a difficult one to take. A huge mistake gave Kilmarnock the opportunity to get back into the game. That moment affected the whole team and the whole atmosphere in the ground. We never recovered.

“The two big moments which have gone against us, we have gifted Kilmarnock. There was Joe’s moment for the equaliser and then a square ball in the second half which sees us get done with a counter attack.

“We backed off Jordan and let him onto his favoured foot. A player of that ability is going to punish you from 20 yards.

“This was a game we should have won comfortably. But when you gift teams two big moments, more often than not you get punished. So you don’t deserve to win.”