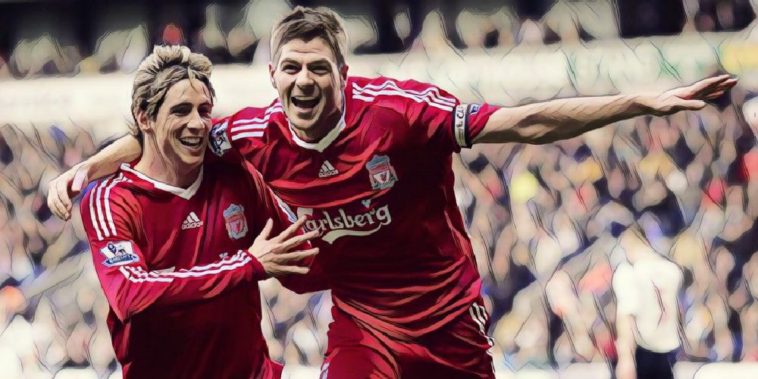 Steven Gerrard has discussed his ‘best years’ at Liverpool and has recalled how Fernando Torres’ transfer to Chelsea left him ‘gutted’.

Gerrard came through the academy ranks at Liverpool to establish himself as arguably the greatest player in the club’s history, making 710 appearances in all competitions and captaining the side to honours including the Champions League and FA Cup.

The former Reds’ captain enjoyed the best years of his career in tandem with Fernando Torres with the duo forming a brilliant understanding, Liverpool coming close to winning the Premier League title that ultimately and infamously eluded Gerrard throughout his career.

Torres departed the Merseyside club in 2011 to join divisional rivals Chelsea in a British transfer-record deal and Gerrard has recalled how he was left ‘gutted’ by the move, revealing how he ‘tried’ to convince the Spaniard to remain at Anfield.

“I was really, really gutted,” he told the Robbie Fowler Podcast. “We’re working so hard at this point to try and get as close as we can to close the gap and challenge.

“At Liverpool at the time it always felt like we were taking huge strides and getting close and progressing really well, and then at a really key time and a key moment for the team and the group, a big player gets taken away and it takes time to recover from that.

“My relationship with Torres, I was getting a lot of goals at that time. I was at my peak and felt fantastic.

“I understand everyone’s situation is different. People have dreams and different paths and they’re not all local lads who love the club.

“I appreciate and respect all that, but at the same time it still hurts when someone leaves a club.

“I’ve told Fernando that. I tried to get him to stay. I told his agent the same. They were both at Melwood but they made a decision and that decision was out of my hands. It hurt a lot.”

“The reason I always talk about Torres and Suarez is because I felt like I was in my prime at that time,” he added. “I played with you (Robbie Fowler) when I was very young, I was still raw, I was still developing.

“I played with Michael Owen when I was a little bit further along but I still didn’t feel I was in my peak years. I was still getting injury niggles and still finding my feet and my profile.

“I bumped into Torres and Suarez at the perfect time. More Torres because I’m in my peak years in those 2006, 07 and 08 years when I felt like I could go against anyone on the pitch.

“It didn’t matter who it was. I felt like I could face anyone at that time. I felt like I was at my peak. They’re my best memories from how I felt from a personal point of view.”

“I didn’t play with Torres long enough because he went to Chelsea and broke my heart. And I probably came into Suarez as I’m just coming out of my peak years, even though I really enjoyed that relationship.

“If you asked me who was the best player on a daily basis consistently, Suarez was an animal but my best years were alongside Torres in terms of how I felt.”