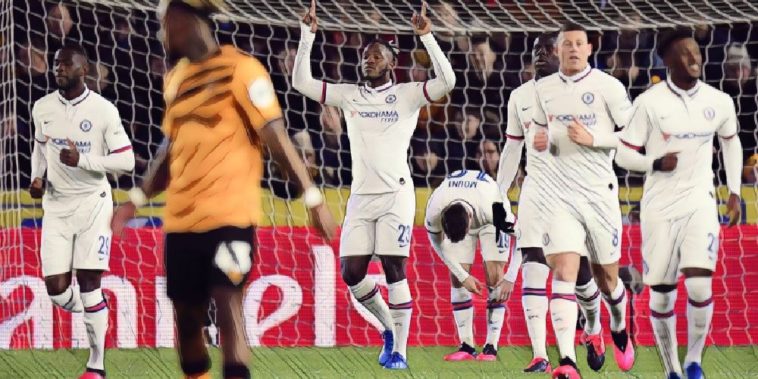 Frank Lampard admitted that he sounds like ‘a broken record’ after making the all too familiar complaints about his Chelsea side as they edged to a 2-1 win over Championship side Hull City.

For a number of weeks now, Lampard has complained about his sides inability to take their chances, as well as the defensive fragility they’ve shown, the Stamford Bridge outfit known to be looking to sign a proven goalscorer in the remaining days of this months window.

With top goalscorer Tammy Abraham out injured, Michy Batshuayi was given a rare chance to impress, and the Belgium international gave Frank Lampard a timely reminder of his goalscoring abilities, his deflected strike firing Chelsea ahead after just six minutes.

Youngster Fikayo Tomori doubled the visitors’ lead 19 minutes into the second half, before Kamil Grosicki pulled one back to set up a tense finale at the KCOM stadium.

Having twice thrown away the lead in the midweek draw with Arsenal, the eight-time FA Cup winners did hold on to the win to secure their place in the hat for the fifth round, and speaking afterwards Frank Lampard sounded sick of saying the same thing week after week.

“The good news is we are in the hat, the bad news is that it is a small example of our season,” Lampard told BT Sport.

“We had the game in our grasp and we play in nice patterns to finish them. But when they don’t come off you need to keep trying them. When we play well we are a good team but we don’t finish the game. We caused our own problems.

“It is a hard one. We work hard in front of goal and it is not coming off for us. It is going to define you. I feel like a broken record. We have the larger share of possession and shots on goal but not making those count.

“There is more goals to be had and control of the game. You can’t bemoan your luck, such as a deflection with the Hull goal. It is frustrating. We are making mistakes and allowing them to run two on tow in the last few minutes.

“This is us. There are some players resting or injured back at the training ground. But this is the constant message from me. If we can’t accept these examples in front us. Newcastle was the same. Arsenal was the same. The message is clear.”

"We allow teams to stay in the game until the 94th minute."

"We lost ground in the summer and we need to improve personnel wise."

Speaking about the January window, Lampard urged the club to get their ‘short term recruitment’ sorted.

“There is no movement to speak of now. We got a punishment in the summer and it is meant to hurt you. We lost one of the biggest players in our history in Eden Hazard. That is the situation.

“My job is to work every day on the training ground to make the players better. We lost ground last summer and we need to make moves now to take us forward. The money side of it is not my job but I have to be honest and truthful. Short term recruitment is something we have to get right.”