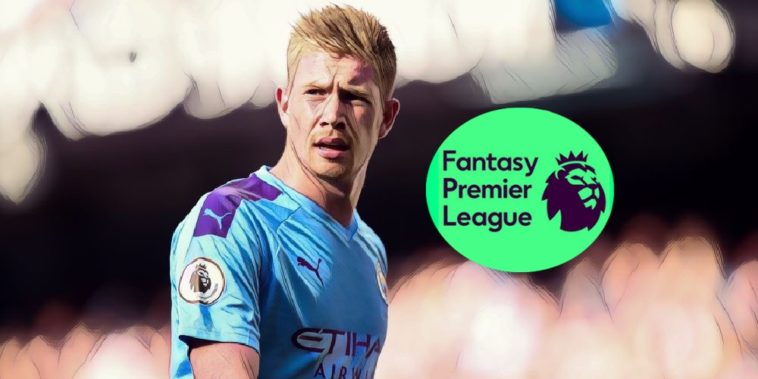 With the confirmation that Kevin De Bruyne is injured and will miss the “next games”, as Pep Guardiola informed us, this leaves many Fantasy Premier League managers wondering what to do.

The Belgian playmaker is one of the most owned players in all of FPL, so his absence will be keenly felt. There has been a rush to transfer him out, but who are the best options to take the Manchester City star’s place?

This one is the obvious move: same club, similar price, and one of the best premium players in the game. Transferring Raheem Sterling in also allows an easy transfer back to De Bruyne when he’s fit, should you want him back.

The England winger is a reliable FPL asset, but his underlying statistics aren’t exactly screaming good value for money right now. He’s putting up three shots per game and two shots on target per game, which is fine for a wide player, but not so much when you consider he played as a striker against Leicester.

De Bruyne’s absence will also have a big impact on the team’s performance. Their chance creation can only decrease, and in five of the last six matches where City have failed to score the Belgian midfielder has not played.

City’s other injury problems shouldn’t be ignored either, as Sergio Aguero and Gabriel Jesus are out as well and Ilkay Gundogan is a doubt. Sterling himself is also a doubt having pulled out of international duty due to injury. In all likelihood he will play, but too many question marks hover over City in general.

That said, Sterling has an excellent record against Arsenal, scoring four goals and making two assists in six starts against the Gunners.

Listen to the latest episode of our FPL podcast:

No player’s value has fluctuated as much as Heung-min Son’s in the opening month, with the Korean’s price increasing and decreasing on a weekly basis. At the moment he is a very popular pick with almost 35% of managers having him in their team.

It’s easy to see why, as Son has scored six goals in four matches, five of which have come from open play, the most of any player in the league. He also leads the league in big chances with six, despite not being on penalties.

Son benefitted from playing against teams in a high block, namely Southampton and Manchester United, so he might not have as much luck against a West Ham United team that has been defensively solid thus far. But Spurs’ upcoming fixtures are attractive, so he could be an ideal replacement until the games get trickier and De Bruyne returns.

A slightly more expensive option than De Bruyne, Sadio Mané is available for Saturday’s clash with Everton after recovering from Covid-19 over the international break.

If you don’t have Mo Salah already in your team, then make him your De Bruyne replacement. If you already have Salah, then there’s no harm in doubling up on the Liverpool pair.

Between them they have provided nine goal involvements in four games and there is surely more to come from both. The Senegalese attacker has taken 13 shots from open play, the second-most in the league, and has also had four big chances – the same number as Salah.

It's Merseyside Derby week, so here is Mane 90+4. One of the best at Goodison

Liverpool have a mixed bag in terms of upcoming fixtures, but as a team they are generally fixture proof (well, when they’re not getting hockeyed 7-2 by Aston Villa) and that is certainly the case with their two main forwards.

If you want to go down a completely different road, the I suggest punting on Jack Grealish to fill the De Bruyne-shaped hole in your heart.

Aston Villa have started excellently, winning all of their first three matches while scoring 11 goals and conceding twice. Grealish has been central to their excellent attack thus far, providing three goals and three assists.

For some reason many doubted the playmaker as a strong option before the season started, but this writer felt he was certainly an undervalued asset, starting out at £7.0m with his ownership hovering around 10%. The England international is making around 3.3 key passes per game, only three players are making more with the man at the top of the list being De Bruyne, naturally.

Villa’s performances will regress at some point, but for now, they’re in good form and given how well they’ve bought in the market, they could be a sold mid-table outfit. Meanwhile, Leicester City could be missing a host of key players for this weekend, so it might be the ideal time to bring in Grealish or another Villa asset.

See Also: Five of the best value-for-money players in FPL this season