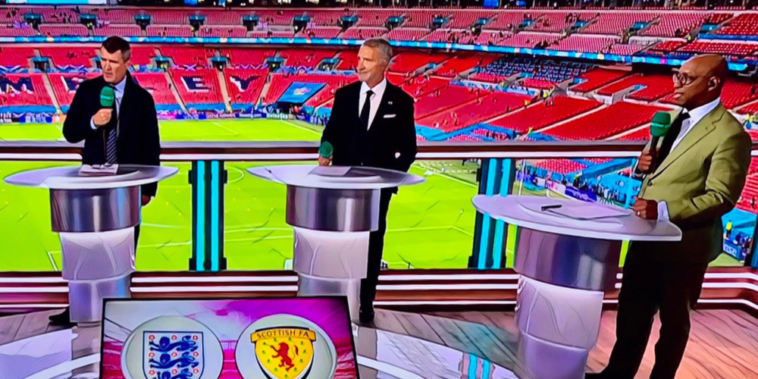 England failed to build on their bright start to Euro 2020, after slipping to a goalless draw with bitter rivals Scotland at Wembley on Friday night.

After clinching a vital opening game win over World Cup semi-final opponents Croatia, the Three Lions went into the clash with Steve Clarke’s side full of confidence, yet were ultimately left ruing a limp display as they failed to really get going against a spirited Scotland side.

While Gareth Southgate’s men remain in a fairly comfortable position in the group with four points from their opening two games, such a drab performance has perhaps tempered any hype that had built up after last weeks victory.

The hosts did see an early John Stones header strike the woodwork, yet in truth, chances were few and far between, with the attacking display simply not up to scratch for a side who have been tipped as one of the favourites to win the competition.

Following the game, former Scotland midfielder Graeme Souness said England looked ‘disjointed’ on the night and said that the Three Lions look nowhere near a side capable of winning the tournament.

“At this level you need more football in the team. Scotland looked like a proper team but without that cutting edge.

“The players to a man were fabulous. I don’t accept England didn’t start right, Scotland were really good.

“England looked a disjointed outfit tonight, there was no cohesion, no purpose in their passing. I come back to Phillips and Rice that for me doesn’t work. They’re two peas out of the same pod.”

Souness’ fellow pundit Ian Wright also weighed in with his criticism of England’s display, questioning the decisions made by Southgate on the night.

“The substitutions confuse me. I don’t know what to think with that,” said the former Arsenal striker.

"Football ain't coming home with that team, I can tell ya!" 💥#ENGSCO | #ITVFootball | #Euro2020 pic.twitter.com/SsTtlkyD0L

“What’s he take Foden off for? There is no way Phil Foden should be leaving the pitch today, for me. It’s very disappointing to see.

“You have someone like Jadon Sancho on the bench, 16 goals and 20 assists this season, and he doesn’t even get on when we need to create.

“We can talk about Harry Kane and the chances he could have had or the touches he hasn’t had, but did we really create enough? We’re meant to be favourites to win this tournament and I was embarrassed for us today.”

Gary Neville meanwhile – who played a vital part of England’s Euro ’96 squad under Terry Venables – said that the occasion may have been too big for certain players.

“It was a really poor performance,” said Neville.

“(There was) Massive disappointment in this ground and it was underpinned by the poor physical levels shown.

“I don’t know what Gareth will be thinking in terms of how he corrects that for the next game because they looked lethargic.

“I don’t know, was it too big for them in terms of expectation? For a few of those lads it was probably the biggest game they’ve played in.”