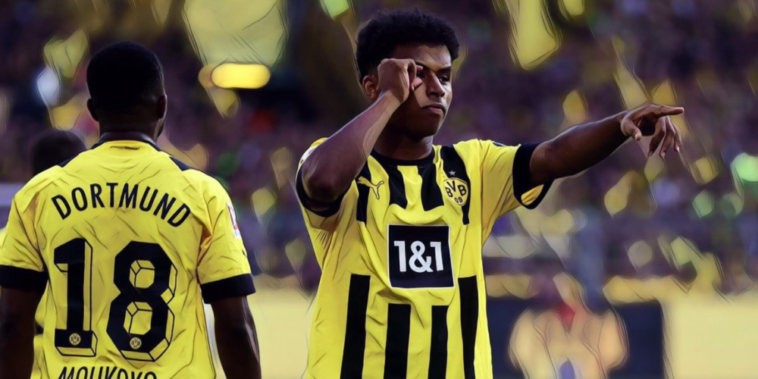 Football Manager 2023 has been released and fans of the game will be eager to delve into their first save.

Unearthing wonderkids is an essential part of forming a successful side for the long term, but many of those who have shone in recent editions of the game have caught the eye of real-life recruitment teams.

We’ve looked at five Football Manager favourites who are at new clubs in 2023.

Anel Ahmedhodžić has been on the radar of Football Manager players in recent editions of the game, with the central defender having proven a bargain purchase for teams in search of solidity on a budget.

The Bosnian spent three seasons at Molde and in past versions of the game was available for a modest fee, though with regular first-team football and development turned into a centre-back capable of starring for title-winning sides.

The 23-year-old signed for Sheffield United during the summer, having spent last season on loan at Bordeaux. An ideal ball-playing defender, he has formed part of a Blades team who are third in the Championship at present and pushing for Premier League promotion.

Red Bull Salzburg is a production line of top talent, with the Austrian champions regularly raided for their emerging prospects.

Salzburg have unearthed some gems across the past decade, having had a key role in the development of players such as Sadio Mane, Erling Haaland and Dayot Upamecano from talented teenagers to elite-level stars.

Karim Adeyemi is the latest who will be hoping to take the next step, having swapped Salzburg for Borussia Dortmund during the summer. He scored 23 goals in all competitions last season and was a favourite on FM22, where his electric pace and clinical finishing caused teams problems in any position across the frontline.

Replacing the sizeable hole left by Haaland’s summer departure has not been quite as easy in real life however, with the 20-year-old having scored just two goals for Dortmund to date.

Hložek is another who has been a regular target for wonderkid enthusiasts, having risen to prominence as a teenager at Sparta Prague.

He made his debut for the Czech side as a 16-year-old and scored 40 goals in 132 appearances for Sparta across four seasons as a first-team regular.

Still just 20, he earned a long-awaited move to a major European league during the summer after signing for Bayer Leverkusen. The versatile forward will join an exciting collection of young talent at the BayArena, which includes fellow wonderkid Piero Hincapié and on-loan Chelsea winger Callum Hudson-Odoi.

The young 🇨🇿 talent joins @bayer04_en on a five-year deal, teaming up with international teammate Patrik Schick – who's excited to see this guy in the league? 🔥 pic.twitter.com/Vj2wIloMdk

Hložek will hope to form a fine understanding with compatriot Patrik Schick that could benefit club and country.

Club Brugge have returned some healthy profits from sales in recent transfer windows, with the likes of Odilon Kossounou and Arnaut Danjuma among those to have departed to top European leagues for significant profits.

Charles De Ketelaere is the latest to have done so, having been a go-to signing for FM players last season given his technical qualities in multiple roles across the forward line.

AC Milan won the race to sign De Ketelaere in real life and he will be difficult to attain in Football Manager 2023 after signing for an elite European side. Those interested in taking over the Italian champions will have an exciting talent to build around however, with De Ketelaere having scored 14 goals and laid on a further seven assists for Brugge last season.

Inter Milan are taking a patient approach of the development of Sebastiano Espositio, with the forward embarking on a fourth consecutive loan deal in 2022/23.

Espositio has signed for Anderlecht for the current campaign, following mixed periods at SPAL, Venezia and Switzerland’s Basel last season. Those familiar with the forward on Football Manager will know how electric the Italian can be in-game, with his movement and finishing seeing Esposito rack up the goals.

It remains to be seen how high his ceiling is on the latest game, but he could be an attainable option once he returns to the San Siro from his latest loan. A season in Belgium will provide your scouts with time to provide a detailed report.