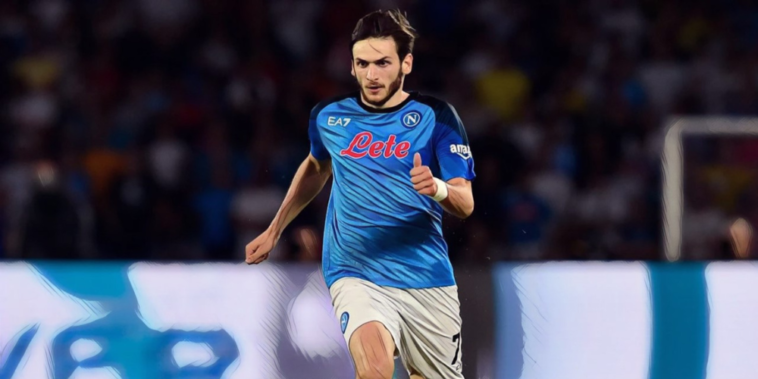 The UEFA Champions League is the biggest stage in club football and this season’s competition has failed to disappoint during a fascinating group stage to date.

It’s been a season of stand-out showings from a number of prospects so far this season, with a number of u23 players having shone in Europe. We’ve picked out several emerging talents who are enjoying breakthrough campaigns in 2022/23.

Napoli have been one of the stories of the season so far following a breathtaking start to the Champions League campaign.

Luciano Spalletti’s side are the competition’s leading scorers after four wins from four, having thrashed Liverpool and Ajax to secure early progress to the knockout stages. The Italians are also unbeaten in Serie A this season and lead the division, with the performances of Khvicha Kvaratskhelia having been a key factor behind their success.

The 21-year-old has been sensational since arriving in Naples from Dinamo Batumi during the summer, with the Georgian winger already on his way to superstar status in Southern Italy.

Reminder that Napoli signed the 21 year old for €10m 🤑 pic.twitter.com/xmS30spK71

He has been electric during the season’s opening weeks with seven goals and six assists from 15 appearances. Five of those goal involvements have come in four Champions League games, for a Napoli side whose fearless and free-scoring approach is embodied in Kvaratskhelia.

Full of elegance on the ball and boasting aggressive endeavor without it, ‘Kvaradona’, as he has been nicknamed at Napoli, is leading the club’s charge towards a long-awaited Scudetto. His €10m fee has proven arguably the bargain of the summer across Europe’s top leagues, with Kvaratskhelia having formed a formidable frontline alongside fellow recruit Giacomo Raspadori (22) and Victor Osimhen (23).

Manuel Ugarte has impressed for Sporting Lisbon in this season’s competition and the ball-winning machine is turning the heads of leading European clubs in search of midfield bite.

Sporting lost key personnel during the summer as Joao Palhinha and Matheus Nunes departed for the Premier League, but Ugarte has stepped up a level in their absence to become a central figure to the side.

The 21-year-old leads the Champions League for combined tackles and interceptions so far this season, with his haul including a mammoth 12 tackles in Sporting’s 3-0 win over Eintracht Frankfurt in September, the most a player has recorded in a UCL fixture since September 2016.

💪 Manuel Ugarte has made more tackles and interceptions combined (34) than any other player in the Champions League this season #UCL pic.twitter.com/Z2zs5o4fUE

Ugarte’s strengths are in his ability to regain possession and he ranks third in Portugal’s top flight for possession won in the midfield third this season. Spurs have been linked with the midfielder, while Liverpool have also been credited with tentative interest as Jurgen Klopp looks to overhaul an ageing engine room.

His current contract is understood to possess a release clause of £52m, though Sporting are in negotiations to raise that fee amid interest in his services. Ugarte’s price-tag and list of suitors could increase with a strong World Cup, where he will form part of a talented midfield group containing Rodrigo Bentancur and Fede Valverde as Uruguay travel to Qatar.

Ferran Jutglà has flourished since leaving Barcelona in search of regular first-team football last summer, having been a key figure in Club Brugge’s impressive campaign.

Brugge have become just the second Belgian side to reach the Champions League’s knockout rounds, with Carl Hoefkens’ side leading a group containing competition regulars in Atletico Madrid, Porto and Bayer Leverkusen.

Jutglà looks set to be the latest name signed for low cost and sold on for a significantly higher fee, having been directly involved in 13 goals across 14 starts in all competitions this season. The 23-year-old made just nine senior appearances for Barcelona, but has proven his credentials on the Champions League stage this season with two goals and two assists.

Ferran Jutglà has 4 goal contributions in the #UCL this season! 🔥

The forward was playing for UE Sant Andreu in Spain’s fourth tier just three years ago, but has emerged as a potential wildcard for Spain’s World Cup squad following his performances this season. He starred during the 2-0 win over Atletico Madrid earlier this month, scoring one and creating another.

Arsenal are among the clubs said to be tracking his progress with Mikel Arteta having taken note of his compatriot’s exploits in the Champions League this season.

Mohammed Kudus is in the midst of a breakthrough season at Ajax, with the talented Ghanaian appearing to have found his role after much experimentation.

The 22-year-old has featured in a number of positions since first making the move to Europe with FC Nordsjælland, where his education developed with periods in central midfield, wide roles and as a false nine.

This season – his third with Ajax – has seen his output explode having been used almost entirely as a centre-forward. Kudus has scored nine goals in all competitions for the Eredivsie side, including three in four Champions League appearances.

It has been a remarkable turnaround for Kudus, who attempted to force through a move to Everton on deadline day after featuring for just 29 minutes across Ajax’s first four league games of the campaign. Ajax declined to do a deal and he has since emerged as a key figure in Alfred Schreuder’s new-look side.

Mykhaylo Mudryk’s performances for Shakhtar Donetsk have led to interest from the world’s top leagues, with clubs queuing up to sign the in-demand winger.

Mudryk has produced a number of explosive performances in this season’s Champions League, scoring twice and creating two further goals for the Ukrainian side. The 21-year-old has also been involved in eight goals in six games domestically, with his scintillating speed and brand of football having seen Mudryk dubbed the ‘Ukrainian Neymar’.

Everton and Brentford were interested in a summer deal, but Mudryk’s performances this season suggest a move to a club outside the Champions League is now unlikely. Arsenal and Juventus are believed to be leading the chase, for a footballer who has tormented RB Leipzig and Celtic in this season’s competition.

He was in brilliant form on Matchday 1, with Mudryk involved in three of Shakhtar’s goals as Leipzig were hit for four in Germany.