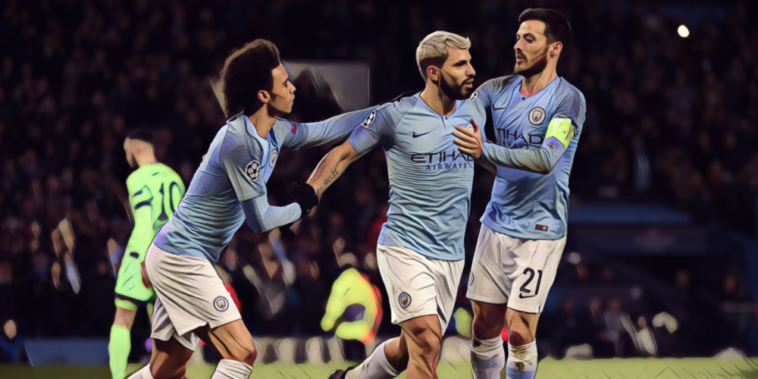 Liverpool produced a superb second-half performance to thrash Rangers in the Champions League this week, as the Reds ran riot at Ibrox to record a 7-1 win.

Mohamed Salah came off the bench to score the Champions League’s fastest ever hat-trick, while Roberto Firmino (2), Darwin Nunez and Harvey Elliott were also on the scoresheet in a resounding win north of the border.

It was a statement showing from the Merseysiders after a difficult start to the season and following the emphatic scoreline, we’ve decided to remember the five biggest Champions League wins by English clubs.

Manchester City produced a scintillating performance to book their place in the 2018/19 quarter-finals, as Schalke were hit for seven at the Etihad.

City had edged an entertaining first leg 3-2 in Gelsenkirchen, but the return was a one-sided affair as Leroy Sane haunted his former side with a goal and a hat-trick of assists. Sergio Aguero broke the deadlock on 35 minutes and opened the floodgates for Pep Guardiola’s side, who were 3-0 ahead within seven minutes of the opener as Aguero’s second and Sane’s effort put City in complete control.

Raheem Sterling, Bernardo Silva, Phil Foden – who became the youngest player to score for City in the Champions League aged 18 years and 288 days – and Gabriel Jesus added to the scoreline in the second period, as City progressed to the last eight 10-2 on aggregate.

Just once previously (Bayern Munich 12-1 Sporting Lisbon in the 2008/09 Last 16) had a team progressed from a knockout tie by a bigger margin.

Liverpool recorded the biggest ever away win by an English team in the competition after thrashing Maribor 7-0 during the 2017/18 Champions League group stage.

Jurgen Klopp’s side made light work of the Slovenian minnows, as Roberto Firmino and Mohamed Salah each scored twice.

Having began the season with consecutive Champions League draws, the win was an emphatic response from the Reds and eclipsed the 6-0 away wins of Leeds (vs Lyn Oslo in 1969) and Manchester United (vs Shamrock Rovers in 1957) as the biggest English away win in top-level European competition.

Philippe Coutinho, Alex Oxlade-Chamberlain – his first goal since arriving from Arsenal during the summer – and Trent Alexander-Arnold also found the net. The win was just the seventh time that an English side had scored four first-half goals in a Champions League fixture.

Liverpool recorded their second 7-0 win of the 2017/18 group stage less than two months later, as Spartak Moscow were humiliated at Anfield.

The Russians had proven stubborn opposition in the first meeting between the teams, but Liverpool found another gear to record a comprehensive home win. Philippe Coutinho was the architect of the win as the Brazilian scored a brilliant hat-trick.

Coutinho scored twice early on to put the Reds in control, before Roberto Firmino made it three goals inside 18 minutes. Sadio Mane added a fourth, before Coutinho’s deflected effort completed his hat-trick.

Mane added his second to make it six and Mohamed Salah completed the seven-goal rout. The win meant Liverpool – who went on to reach the final – progressed as group winners, having scored 23 goals in just six fixtures.

Arsenal earned a record-equalling Champions League win in 2007, as Arsene Wenger’s side produced a spellbinding showing against Slavia Prague.

The Gunners secured a 12th consecutive win in all competitions after dismantling the Czech visitors, in a margin of victory which equalled the then-biggest win in Champions League history, matching Juventus’ 2003 destruction of Olympiakos.

Cesc Fabregas scored twice including a stunning opener after just five minutes, while Theo Walcott marked his first Champions League start with a brace of his own. The 18-year-old’s pace and movement caused problems for Slavia all evening, as the north Londoners racked up a huge scoreline.

Alexander Hleb and Nicklas Bendtner were also among the goals, alongside an own goal from David Hubáček.

Liverpool hold the record for the biggest Champions League win by an English club and the joint-biggest of any club in the competition’s history.

Rafael Benitez’s side became the first to score eight goals in a Champions League fixture after a demolition of Besiktas at Anfield, with Yossi Benayoun scoring a hat-trick for the home side. He remains the only Israeli player to have scored a treble in the competition.

The Reds were rampant to rack up a record scoreline, with Peter Crouch and Ryan Babel each scoring braces as Liverpool’s forward options tormented the Turkish visitors.

Just one side has ever matched Liverpool’s 8-0 win, when Real Madrid thrashed Malmo in 2015. Coincidentally, Benitez was also in charge of Real Madrid for their eight-goal win, one which saw Cristiano Ronaldo (4) and Karim Benzema both score hat-tricks.