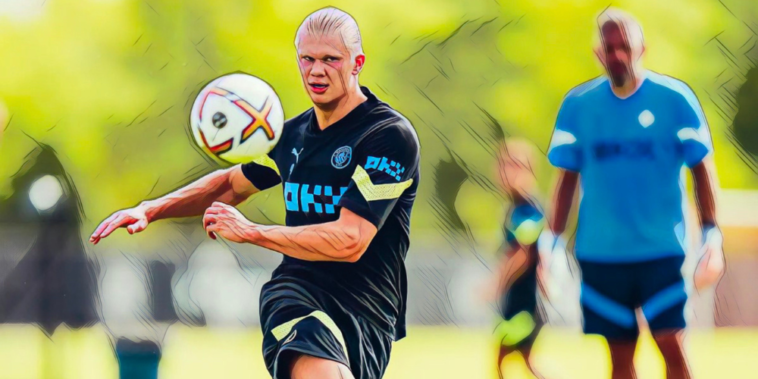 Premier League clubs have splashed the cash once again this summer, with the new season set to feature a raft of new faces as English clubs once again dominate the transfer window.

From big-name arrivals to intriguing additions representing somewhat of the unknown, there is no shortage of top talent ready to make their mark after arriving into the Premier League.

With the new season now just a little more than two weeks away, we’ve picked out five of the best summer signings that we can’t wait to see in action.

Where better to start than the headline arrival of the summer window?

Manchester City have won the race to sign Erling Haaland, a forward whose frightening goal record had each of Europe’s elite scrambling for his services.

Since bursting onto the scene at Red Bull Salzburg, the Norwegian goal-machine has made breaking records a welcome habit and has scored 115 goals in 116 appearances at club level since first arriving in Austria.

Fast, direct, powerful, and clinical around goal, the 22-year-old better resembles a centre-forward created by scientists such is the completeness to his game.

Haaland’s arrival will increase City’s hopes of Champions League success, having shattered goalscoring records on that stage. He became both the youngest and fastest footballer to ever reach 20 goals in the competition, achieving the feat in just 14 games.

The move to the Premier League poses a new challenge for the Norway international, but given he will be provided service from a creative cast as good as any in world football, few would bet against him setting more records tumbling in English football.

Liverpool have also increased their firepower this summer with the arrival of Darwin Nunez, signing the forward in a deal which could reach a club-record £85m from Benfica.

Sadio Mane’s exit is a blow to last season’s runners-up, but Jurgen Klopp will hope the new arrival can replace the goals Mane provided last season.

Nunez catapulted himself into the consciousness of Europe’s leading clubs following a prolific season last term, with the Uruguay international having scored 34 goals in 41 appearances in all competitions.

Winner of the Primeira Liga Player of the Year and Top Scorer awards, his price-tag will provide pressure upon his arrival into English football but Jurgen Klopp will give the 23-year-old time to adjust.

Social media scrutiny has already been hyperbolic following Nunez’s modest first outings in pre-season, but there is a confidence from within Liverpool that the forward can be a major contributor to their season.

Virgil van Dijk spoke of the difficulty in containing Nunez during Liverpool’s meeting with Benfica last season and the Reds’ recruitment team – unerringly accurate in recent windows – will be hoping the striker is another success story at Anfield.

After several summers of intense speculation, Kalidou Koulibaly has finally secured a major move away from Napoli.

The world’s richest clubs have courted the commanding centre-back across his eight seasons in Italy, but were met with resistance from the Serie A side.

The Senegal international’s desire for a new challenge and contract situation has now led to an exit, where he will be tasked with rebuilding Chelsea’s defence after completing a £33m move to west London.

Koulibaly made 317 appearances for Napoli and was named in the Serie A Team of the Season on four occasions, whilst he also won the division’s Defender of the Year accolade during the 2018/19 campaign.

Kalidou Koulibaly will wear the No.26 in preseason for Chelsea.

Now 31, he arrives with a wealth of experience and Thomas Tuchel is confident the defender can become the leader of his new-look backline.

“He brings experience, top defending quality, height, and everything we are looking for to play in a back-three or a back-four,” Tuchel told the club’s official website.

“It’s another brilliant signing for us, and we hope Kalidou can show his quality as soon as possible.”

After a slow start to the transfer window, Manchester United are up and running when it comes to Erik ten Hag’s rebuild at Old Trafford.

Tyrell Malacia was the first name through the door, before Christian Eriksen arrived on a free transfer following the expiration of his contract at Brentford.

The marquee signing so far has been the arrival of Lisandro Martinez from Ajax, with the Red Devils having beaten off competition from Arsenal to sign a defender who shone under Ten Hag in Amsterdam.

Martinez was named as Ajax’s Player of the Season last term after helping the Dutch side to the Eredivisie title, and arrives with a burgeoning reputation as a front-footed centre-back with the ability to step forward in possession and pick passes through opposition lines.

For those saying Lisandro Martínez is too small to be a centre back 👀 pic.twitter.com/XtKQxEbGmD

The 24-year-old will compete with Harry Maguire and Raphael Varane for a place in the side, with the duo having endured disappointing campaigns in 2021/22.

“He’s a warrior and I think the fans will admire him,” Ten Hag said on Martinez to the club’s official website.

“He has an attitude, fighting spirit. He brings aggressiveness in the game, in a good way. I think we need that. But also, he’s also skilful and he can deal with the ball and he’s left-footed.”

Leeds are in the process of a rebuild this summer, with Jesse Marsch having invested more than £90m on a host of new faces at Elland Road.

The departures of Kalvin Phillips and Raphinha have left sizeable voids that require filling and the arrival of Luis Sinisterra appears a direct replacement to fill the creative burden the latter carried last season.

Despite a preference to feature on the opposite flank, the similarities between the two are evident with an inclination to drift inwards onto their favoured side and carve out goalscoring opportunities.

Most successful take-ons in the 21/22 Dutch Eredivisie season:

Last season the 23-year-old’s output exploded for Feyenoord, with Sinisterra scoring 23 goals and providing 14 assists in 49 appearances for the Dutch side.

His goal threat helped Feyenoord to a third-place finish in the Eredivisie and to the final of the Europa Conference League, before Leeds secured a £20m deal to bring the winger to the Premier League.

Leeds’ transfer window has been one of the most intriguing of the summer with eye-catching but unproven arrivals from foreign leagues. Sinisterra – full of flair and invention – looks the most exciting of the lot.