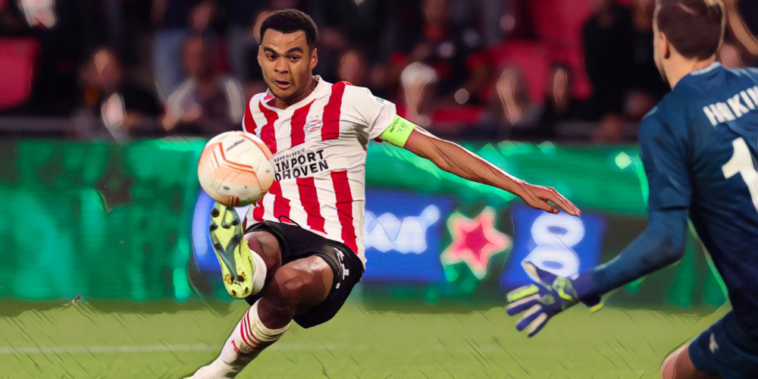 The Europa League often lives in the shadow of Europe’s top club competition, but as ever this season there will be a number of exciting talents operating outside of the Champions League spotlight.

Manchester United and Arsenal are among the teams competing to win the competition in 2022/23, in what promises to be another fascinating season of continental action.

We’ve picked out five footballers to keep an eye on in the Europa League this season.

Cody Gakpo found himself at the centre of transfer speculation during the summer window, with a number of Premier League clubs keen on the PSV Eindhoven winger.

Gakpo was named as Dutch Footballer of the Year in 2021/22 after a brilliant season for the Dutch side, in which he scored 21 goals in all competitions. Having become the first Netherlands player to make his international debut in a European Championship since 1980, Gakpo’s form has since placed him in contention for a prominent role at this winter’s World Cup.

After a career-best campaign – which included the scoring the winner as PSV beat Ajax in the KNVB Cup final – he has continued in a similar vein, with seven goals in just six Eredivisie appearances so far this season.

Manchester United, Southampton and Leeds were all credited with an interest last summer and the latter remain keen to do a deal for the Dutchman. Explosive, exciting and with an improving end product around goal, the 23-year-old’s value will continue rising with a strong season in the Europa League.

Arsenal will need to keep close tabs on Gakpo when the two teams meet in the group stage.

Luka Romero made history when making his debut for Lazio on the opening weekend of last season, becoming the club’s youngest ever player when featuring against Spezia, aged 16 years, 9 months and 10 days.

Romero was signed from Mallorca that summer and has been tipped as a star of the future, having impressed for Argentina at youth level to earn a first senior call up in March 2022.

The 17-year-old featured eight times in Serie A last season, all as a substitute, and will hope for increased opportunities during the current campaign. He has been an unused substitute in each of Lazio’s fixtures so far this season, but could earn a chance should the Italians rotate in Europe.

The attacking midfielder’s precocious talent saw him become youngest player (aged 15 years and 219 days) to ever play a professional match in La Liga at Mallorca, breaking a record that had stood since 1939.

Born in Mexico to Argentine parents before a move to Spain as a child, he is able to represent all three nations at international level and could find himself at the centre of a tussle should La Albiceleste not follow their initial call up with a senior cap.

Kökçü came through the academy system at Feyenoord and has since attracted interest from across Europe for his displays in Dutch football, with Arsenal among the sides who have been linked with a move for the Netherlands-born Turkey international.

11 – Since 2019, no player scored more Eredivisie goals from outside the box than @Feyenoord's Orkun Kökçü. Special. pic.twitter.com/4PiLHNyL7G

A technical midfielder comfortable in a variety of roles, his passing over short and long range has impressed with an ability to thread passes through lines.

The 21-year-old has already earned 16 caps for Turkey, having previously represented the Netherlands at youth level before changing his international allegiance. Last season Kökçü scored nine goals and provided nine assists in 51 appearances for Feyenoord, as the Dutch side reached the Europa Conference League final.

England fans will be familiar with the name Roland Sallai, following the winger’s role in Hungary’s thrashing of the Three Lions in June.

Sallai scored twice as Hungary won 4-0 at Wembley in the UEFA Nations League, inflicting England’s heaviest home defeat since losing 5-1 to Scotland in 1929.

A modern wide forward full of acceleration and sharp changes of direction, he has scored eight goals in 36 appearances for Hungary at international level and has impressed for Freiburg since joining from Apoel Nicosia in 2018.

Last season Christian Streich’s side finished sixth in the Bundesliga and as runners-up in the DFB-Pokal, with Sallai part of a side who will be hoping to continue their upward momentum this season. Freiburg are into the Europa League for the first time since 2017/18 and began with a 2-1 win over Qarabağ.

Illya Zabarnyi has had a meteoric rise across the last two seasons, emerging from Dynamo Kyiv’s academy ranks to become a fully-fledged international with Ukraine.

Zabarnyi was introduced to the Dynamo side as a teenager and has not looked back, overcoming some initial shaky moments to emerge as one of the most promising defenders outside Europe’s major leagues.

All European clubs should take a look at the Ukrainian footballers in the next transfer windows. 🇺🇦💪 pic.twitter.com/XNQA1c3hyb

Tottenham have been linked with the 20-year-old, who became the second-youngest player to represent Ukraine behind former Spurs striker Serhiy Rebrov, at the age of just 18 years and 36 days in 2020.

Tall, strong in the air, and confident in possession, he helped Dynamo to a domestic double in 2020/21 and has all the attributes required to step up another level. Part of an exciting emerging crop of Ukrainian talent also including Mykhaylo Mudryk, he has already earned 20 senior caps for the national side.