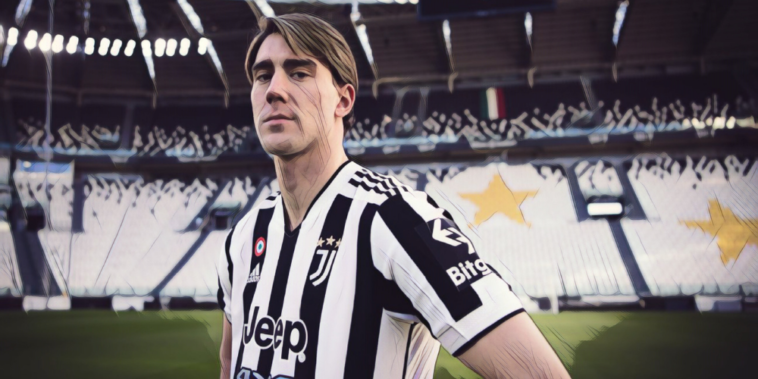 Premier League clubs once again dominated the spending during the January transfer window, though there were a number of fascinating deals completed across Europe’s top divisions this winter.

Juventus beat off competition from England and won the race for one of Europe’s most in-demand talents, the Bianconeri making changes as the club look to revive their faltering fortunes.

Barcelona were also busy and raided the Premier League for a number of attacking talents, whilst there was a marquee arrival in Scotland in the closing stages of the transfer window.

Following the deadline for European clubs, we look at eight of the most intriguing deals across European football this January.

Dusan Vlahovic’s stunning form for Fiorentina saw the forward dominate transfer speculation this month, with both Arsenal and Tottenham interested in bringing the 22-year-old to the Premier League.

Vlahovic is the joint-leading scorer in Serie A this season with 17 goals and equalled the divisional record for goals scored in a calendar year after netting 33 times for Fiorentina in 2021.

The Serbia international turned down interest from England to sign for Juventus, however, completing a deal worth an initial €70m after turning down a new contract in Florence.

Dusan Vlahović: “There were lot of rumours about clubs from abroad… but it was an easy choice for me [to sign for Juventus]. This club has winning mentality, like me”. ⚪️⚫️ #Juventus

“I’m extremely happy – I’m joining a glorious club and this is what I wanted. I can’t wait”. pic.twitter.com/7OMzCVyNUq

His arrival could help reinvigorate Juventus’ fortunes with the Old Lady currently 11 points behind Inter Milan in the title race.

His arrival may come too late to salvage their season in 2021/22, but he is a talent Juventus can build their side around for the next decade.

Juventus also secured a late deal for Denis Zakaria, securing the signing of the defensive midfielder from Borussia Monchengladbach. The Switzerland international – who was out of contract this summer – had been linked with the likes of Manchester United and Liverpool.

Barcelona completed the €55m signing of Ferran Torres early in the January window, securing the arrival of the forward from Manchester City.

Torres had impressed during a debut season in England that delivered 13 goals in all competitions, but was persuaded to return to La Liga after Barcelona expressed an interest in his services.

The 21-year-old has established himself in the Spain national side and has 12 goals in 22 appearances for La Roja at international level, with Torres joining a wealth of Spain teammates at the Camp Nou.

In Torres, Gavi, Pedri and Ansu Fati, the Catalans now possess a quartet of Spain’s brightest talents as the club look to navigate a challenging period both on and off the pitch.

Sardar Azmoun had been courted by several sides across Europe as he approached the end of his contract at Zenit Saint Petersburg, the forward having enjoyed a prolific period in the Russian Premier League.

Bayer Leverkusen won the race to sign the Iran international, who scored 52 goals in just 79 league appearances for Zenit and was named as Russia’s leading scorer and Player of the Season in 2020/21.

He leaves as the joint most prolific foreigner in the RPL's history. pic.twitter.com/H0Fs8WHRtL

Leverkusen have agreed a deal to see Azmoun move to Germany immediately, one that has cost the club just €2m to complete with the 27-year-old joining Patrik Schick and Florian Witz among an exciting collection of attacking options.

If Azmoun can replicate his prolificacy at Zenit in the Bundesliga, he will be one of the bargains of the transfer window.

The sale of Vlahovic has left Fiorentina with a sizeable void to fill, but the Serie A side have made some shrewd signings in January, including the arrival of Jonathan Ikone from Lille.

The winger formed part of the Lille side that won Ligue 1 last season and has moved to Fiorentina for a fee of €15m, a reasonable sum for a player who has won four caps for France at international level.

Ikone is comfortable out wide and in a central role as a number ten, with his speed and eye for a pass set to add creativity to Fiorentina’s attacking options.

Ikone’s numbers in terms of goals and assists can improve, but at 23 he has room for development and his speed and potential make him an intriguing signing for Fiorentina.

He will join the likes of Krzysztof Piątek and Arthur Cabral in Florence after Fiorentina sought multiple additions in an attempt to replace the goals of Vlahovic.

Rangers secured arguably the coup of deadline day after sealing the shock arrival of Aaron Ramsey, the Scottish champions securing a loan deal for the Juventus midfielder.

Ramsey has spent two-and-a-half seasons in Turin after signing from Arsenal on a free transfer, but has struggled for fitness during his time with the club despite a Serie A title triumph in 2019/20.

The 31-year-old has completed 90 minutes on just two occasions for the Bianconeri and has been allowed to leave for Ibrox with Juventus’ blessing, the Italian side paying a significant portion of his wages.

🆕 #RangersFC are delighted to announce the loan signing of @Cymru international midfielder @aaronramsey from @juventusfc until the end of the season.

With Scotland’s title winners set to be allocated an automatic place in next season’s Champions League group stage, Ramsey is a statement signing as Rangers look to remain above Celtic and defend the title.

Ramsey was brilliant at his best for Arsenal and scored 65 goals in 371 games for the Gunners, winning the FA Cup on three occasions and scoring the winning goal in two of those finals.

If he can recapture somewhere close to his finest form, he could be a transformative signing for Rangers and the midfielder could make his debut in a huge Old Firm derby against Celtic tomorrow evening.

The second signing from Fiorentina’s multiple replacements for Vlahovic, Arthur Cabral has swapped Basel for the Serie A side in a €15m deal.

Cabral has enjoyed a prolific period since moving to Switzerland from Palmeiras, scoring 65 goals in just 106 appearances for Basel across all competitions.

DONE DEAL: Fiorentina have signed Arthur Cabral from FC Basel for an undisclosed fee and he will wear the No.9 shirt.

The Brazilian has scored 27 of those goals in 2021/22 alone, including an extraordinary run in the Europa Conference League with 13 goals in 12 games including qualifiers.

The move to Italy represents a significant step up for Cabral, but the 23-year-old will arrive in Florence in confident mood and with ambitions of maintaining his impressive goal record in Serie A.

Jonas Wind has long been linked with a move to one of Europe’s top-five divisions, having impressed with his performances in the colours of FC Copenhagen.

The Denmark international has scored 46 goals in 113 appearances for the Danish outfit, but will now be tasked with filling the Wout Weghorst-sized hole in Wolfsburg’s attack.

Weghorst was allowed to leave for Burnley in a £12m deal on deadline day, Wolfsburg sanctioning the sale of the Netherlands international despite the 29-year-old scoring 53 league goals across the past three full Bundesliga seasons.

Wind mixes an imposing frame with good technique and the 22-year-old will want to prove himself in a major European league as he bids for more regular involvement with Denmark at international level.

He has scored four goals in 12 caps for the Danes since making his debut in 2020.

Lyon have sealed the signing of Romain Faivre from Brest, the midfielder having forged a reputation as one of Ligue 1’s best creative talents across the past two seasons.

The 23-year-old led the league for carries into the final third last season and is again top of the rankings this term, with Faivre’s dribbling ability having seen him previously linked with AC Milan and Paris Saint-Germain.

Bruno Guimarães in Ligue 1 this season:

Romain Faivre in Ligue 1 this season:

Faivre has scored seven goals and provided five assists across the first half of the Ligue 1 season and will inject quality into the Lyon side alongside fellow winter window arrival Tanguy Ndombele.

The €15m fee could prove a bargain if Faivre can continue his upward curve in a Lyon side currently languishing in 11th in a congested Ligue 1 table.