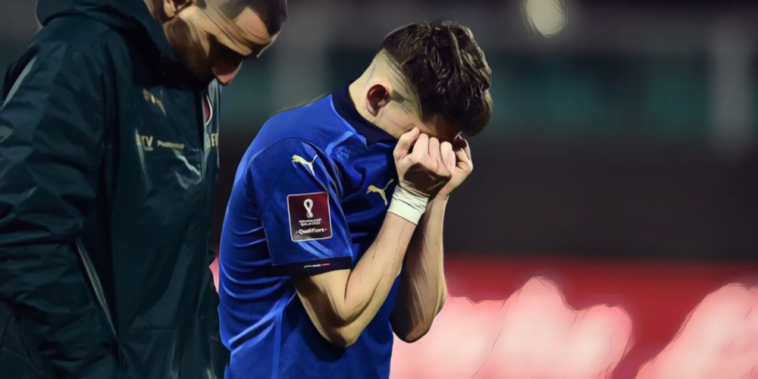 The World Cup will put a prestigious pause to the domestic season next month, as the football’s biggest event takes place in Qatar.

It is set to be a fascinating tournament given the unprecedented timing in the middle of the campaign, as international football’s finest compete to be crowned world champions.

There will be envious glances cast towards the Middle East from those who missed out on qualification, with some respected football nations among those who will be watching from home.

The glaring omission from the line-up for Qatar is Italy, who became just the fourth reigning European champions to miss out on World Cup qualification.

Italy were brilliant to win Euro 2020 just over 12 months ago, as Roberto Mancini’s side produced a string of impressive performances to be crowned winners of the tournament. The Azzurri beat Belgium, Spain and England on their path to the trophy, with Gianluigi Donnarumma named as the tournament’s finest footballer.

Italy have failed to qualify for back-to-back World Cups for the first time in their history. 🤯 pic.twitter.com/m7hyjMT0fM

During that tournament, Italy – who are ranked sixth in the world – extended their world-record unbeaten run to 37 games, but their World Cup qualification campaign ended in disaster. A run of four draws in five games between September and November 2021 saw Italy finish second behind Switzerland. Two of those draws came against the Swiss, with Jorginho missing penalties in both games. Had either been converted, the Azzurri would have been assured a place in Qatar.

Then came their play-off defeat, as Italy fell to North Macedonia. Despite a dominant performance that saw Italy register 32 shots and 65% possession, a 92nd-minute goal condemned the Italians to defeat. Only Czechoslovakia (1978), Denmark (1992) and Greece (2004) have ever missed the following World Cup after winning the European Championship.

It is the second successive World Cup that Italy have missed, having previously not missed the tournament since 1958.

South America’s qualification campaign can be an arduous slog and Colombia are the big names to have missed out a World Cup place his time around.

Colombia had featured in both 2014 and 2018, enjoying a particularly impressive tournament at the former as James Rodriguez won the Golden Boot and the South American side reached the quarter-finals.

A disappointing qualification campaign saw Colombia finish sixth, a point behind Peru to miss out on the inter-continental play-offs. Despite a team with talents such as Rodriguez, Luis Diaz and Duvan Zapata, Colombia won just five of their 18 games.

Although ranked 17th in the world by FIFA in the latest ratings, Colombia will not be part of the 32-team tournament in Qatar.

Note: Sports fans all over the world can now watch the FIFA World Cup 2022 matches from anywhere online in the best way possible.!

Chile were the other major casualties from South America’s qualifiers after the nation missed out on a third consecutive World Cup appearance.

The Golden Generation of talent that won consecutive Copa America titles in 2015 and 2016 has reached the end of its cycle, with the key figures from that team such as Charles Aránguiz, Arturo Vidal and Alexis Sanchez approaching the final stages of their international careers.

The decline is notable in the most recent national squad, with just one player – the 33-year-old Sanchez – currently playing his club football in one of Europe’s top five major leagues.

Sweden have featured in 12 World Cups and have reached the semi-finals on four occasions, with their most recent last four appearance at USA ’94.

The Scandinavian side reached the last eight in Russia four years ago before defeat to England, but failed to secure a place in Qatar this time around.

Sweden were impressive on home soil and won each of their four fixtures at the Friends Arena, but costly away defeats in Georgia – the lowest ranked team that has ever defeated Sweden at 93rd in the world – and Greece saw Janne Andersson’s team finish four points behind Spain. Sweden entered the play-offs, but lost 2-0 to Poland to miss out on a place at the World Cup.

Mohamed Salah will be among the most high-profile absentees from the World Cup, after Egypt missed out on qualification to a second straight tournament.

The Egyptians have been a dominant force at continental level with a record seven Africa Cup of Nations triumphs, but have suffered a series of World Cup heartbreaks including qualification for Qatar.

Egypt were beaten 3-1 on penalties by Senegal, in a repeat of their Africa Cup of Nations final defeat to the Lions of Teranga earlier in the year. Salah struck his penalty over the crossbar and was one of three Egypt players to miss from the spot.

Senegal fans aren't the first ones to use a laser to distract players during a match, but it's wild that the referee let this continue.

Salah missed the penalty, and Egypt is out of the World Cup.pic.twitter.com/OpRzEGk7yA

Nigeria – qualifiers in six of the past seven editions of the World Cup – will be another notable African absentee in Qatar.