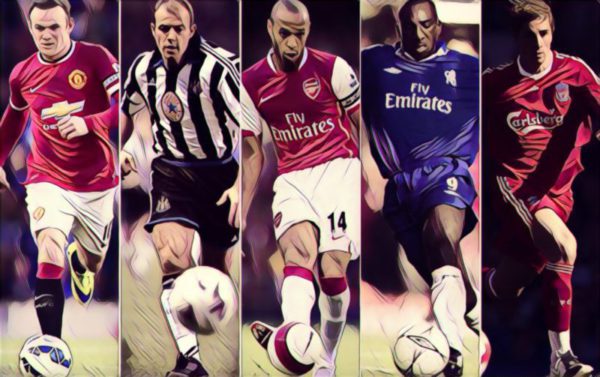 After last week’s epic encounter between Arsenal and Chelsea, we got to thinking, what are the top games ever in the 25 years of the Premier League ?

Well, we’ve narrowed it down to five games, although we will probably need a few more articles to do justice to all the classic games that have been played out over the years, so let’s have a look at part one of, five of the best Premier League games ever.

With St.James Park no stranger to classic Premier League games, and Arsenal’s penchant for being involved in high scoring encounters it’s no surprise that this game resulted in a classic.

Arsenal, traveled up North still very much involved in the title race and flew into a 4-0 half time lead through goals by Djourou, Walcott and a Van Persie double.

Newcastle fans who were already up in arms over the sale of local boy Andy Carroll, booed their team off at half-time and many had seen enough with thousands leaving the ground in protest.

Those who left would soon regret their decision, as the Toon fought back to bring the score to 3-4 with 2 penalties from Joey Barton, and a Leon Best strike.

Newcastle pushed on in search of the equaliser and they would find it through the most unlikeliest of sources. The ball fell to defensive midfielder Chieke Tiote 35 yards out, and the Ivorian smashed home a stunning left-footed volley. Tiote was not exactly reknowned for his goal scoring, and after his initial shock, he ran the length of the pitch celebrating in pure ecstatsy.

A match  that was the very definition of “a game of two halves.”

Spurs absolutely flew out of the traps in the first-half, completely out playing reigning champs Man United at White Hart Lane. By half-time Spurs had raced into a 3 – 0 lead via goals from Dean Richards, Les Ferdinand and Christian Ziege.

Sir Alex must have gave a given his men a serious rollicking at half time, as a completely different team emerged for the second- half. The Premier Leagues second highest goalscorer ever Andy Cole scored within a minute of the restart. United then dominated a shocked Spurs side, and took the lead after goals from Juan Veron, Laurent Blanc and Ruud van Nistelrooy, before David Beckham sealed the victory with a beautifully struck half volley, to cap one of the greatest come backs in Premier League history.

These lists are normally dominated by the Premier Leagues more established clubs, however it’s impossible to ignore the Premier Leagues highest scoring game ever. A day of absolute madness at Fratton Park which was fittingly covered by Soccer Saturdays very own mad man Chris Kamara.

We’ll just let the video do the talking on this one !

North London derbies are usually full of drama and this one is our personal favourite.

This match was ‘Arry Redknapps first game in charge of Spurs, and his team would get off to a great start when ex-Arsenal man David Bentley struck with a 40-yard wonder goal.

Mikeal Silvestre levelled the score to leave the match poised at 1-1 at half-time. William Gallas and Adebayor then fired Arsenal into a 3-1 lead, although Darren Bent soon scored to give Spurs a glimmer of hope.

When Robin Van Persie made it 4-2 the game seemed to be over. Spurs were not prepared to throw in the towel just yet however, and when Jermaine Jenas scored a brilliant solo effort the game was set up for a thrilling climax. Then with almost the last kick of the game Luka Modric smashed against the bar, the ball rebounded to Aaron Lennon who blasted home to level the scores at 4-4. A fitting end to a fantastic game.

For a long time this game was widely considered to be the greatest Premier League game ever. Kevin Keegan’s Newcastle travelled to Anfield still fighting for the title, and in need of a victory. Both sides were great going forward, but suspect defensively which produced a game full of great goals and end-to-end action.

Liverpool took an early lead through local hero Robbie Fowler. Newcastle quickly struck back with a Les Ferdinand goal, and soon took the lead via David Ginola. Fowler was again on hand to bring Liverpool level early in the second-half, but Colombian Tino Asprilla put the Magpies back in the lead with a beautifully curled finish with the outside of his right boot.

The game was being played at a breakneck speed and both sides threw men forward at every opportunity. Subsutite Stan Collymore would get the equaliser for Liverpool before hitting the winner late on.

Sky commentator Martin Tyler’s commentary of Collymores winning goal, and the subsequent image of Kevin Keegan slumped over the Anfield hoarding remain two of the Premier Leagues most iconic moments.

On the last day of the season, Man City knew all they had to do was to beat 17th place QPR to win the League. Things seemed to be going to plan for Roberto Mancini’s side when Pablo Zabaleta put them into a first-half lead.

As the game entered the second half word swept around the Etihad that second place Man United had taken the lead against Sunderland via a Wayne Rooney goal, and when Booby Zamora levelled for QPR things started to get really tense for the Blue half of Manchester.

That sense of tension would soon turn to shock and horror when Jamie Mackie put the R’s into a unlikely lead. It seemed that City were blowing their big chance of becoming Premier League Champions.

Edin Dzeko managed to equalise for City in the 92nd minute, but it still seemed to be too little too late as Man United’s game had finished in Sunderland, and their players waited on the Stadium of Light pitch expecting to be crowned Champions once again.

Then in the 95th minute City captain Vincent Kompany desperately pumped the ball forward to the edge of the QPR box, Mario Balotelli knocked the ball into the path of Sergio Aguerooooooo who smashed the ball past Paddy Kenny to give City the victory they so graved – cue scenes of delirium for everybody in Blue. City were crowned Champions in the most dramatic last day title finish the Premier League has ever seen.