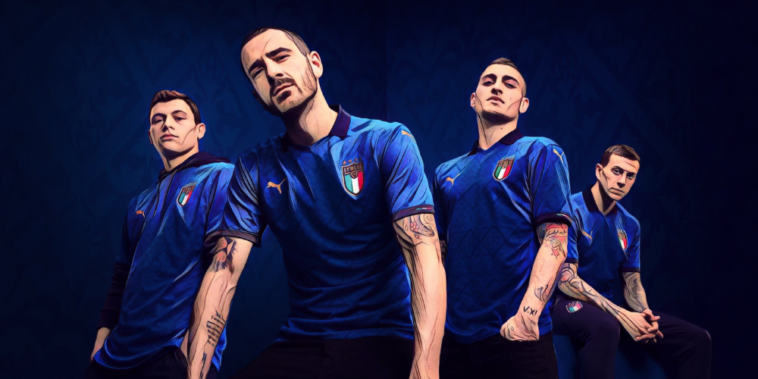 This summer will bring a festival of football as the rescheduled European Championships take place, the continent’s best competing to be crowned as champions of Europe.

The tournament will begin in June and take place for a month. Wembley hosting the latter stages with the semi-finals and final scheduled to take place at England’s national stadium.

Whether you’re christening the competition as Euro ’21 or keeping with a postponed Euro 2020, one source of intrigue for fans is the release of new jerseys for the competing nations.

The kits are already out as we prepare to embark on what promises to be a thrilling major tournament and we’ve picked out some of the best designs on offer.

Blackout kits have become a huge favourite of football hipsters and this effort from Adidas is as cool as they come, the dark tones throughout the jersey complemented by the black, red and gold German flag trim on the sleeves.

Dark designs are often safe but can come at the risk of being underwhelming, but this is a fine effort as Germany return to a black away shirt for the first time in a decade.

Sharp and sleek, the Germans will be one of the best-dressed sides on show as they bid to qualify from the tournament’s Group of Death featuring world champions France, holders Portugal and Hungary.

Germany back once again with an absolute gem of an away kit pic.twitter.com/thVZd2Ymqw

Do Croatia ever produce a bad home shirt?

The red and white chequerboard look is one of the most distinctive in international football and this latest design from Nike is set to prove popular once more, the traditional colours added to by blue detailing in line with the Croatian crest.

Croatia – who face both England and Scotland in Group D – will be perennial dark horses once again and will look to upset the odds in an iconic kit.

The away version comprises of smaller squares as black meets grey in a shirt that will split opinion, though it’s an improvement on the strikingly similar style Nike chose for Liverpool’s 2020/21 third kit.

Shirt Alert: Croatia's new home and away kits are out

What do you think? pic.twitter.com/6cEGSr996p

Italy are back after failing to qualify for the 2018 World Cup and one of the leaders of the fashion world have stamped their style on international football once again.

Well-drilled and well-dressed again, the navy collar adds to a smart look, whilst the colours of the Italian flag are stitched into the sleeve trims and the four stars – representing each of Italy’s four World Cup triumphs – sit proudly above the badge in gold.

The away shirt follows a similar design and is likely to prove attractive to shirt collectors, with Puma having chosen a unique green base colour.

One of our favourites and a shirt that proves that simplicity can often lead to success.

We’re not entirely sure why Turkey have chosen to swap their traditional home and away colours around for their latest designs, but both shirts certainly hold appeal.

The away version is all red including shorts and socks, with an enlarged star and crescent sitting beneath the Nike swoosh centrally.

Both shirts incorporate banding across the chest and sleeve and collar detailing, the home jersey having red detailing, whilst the away version has a more subtle tonal contrast.

Shirt Alert: Nike have released the new Turkey home and away kits

What do you think? pic.twitter.com/6SYKgBrR5b

One for those who like a little more eccentricity in their kit design, holders Portugal will arrive at the tournament daring to be different with this away shirt.

Portugal’s away shirt is a teal-like base colour with stark hooping across the front, the banding including stripes of black, red and a darker shade of teal in a bold statement of intent.

It’s a shirt that looks like it shouldn’t work on first glance, but an unusual colour combination appears to have found its fit as the reigning champions bid to become only the second nation to defend the trophy.

Hall of Fame or Shame? pic.twitter.com/Kb9m2Sr6G5

With names such as Bruno Fernandes, Bernardo Silva and Ruben Dias joining Cristiano Ronaldo amongst their options, few will fancy facing the Portuguese this summer.