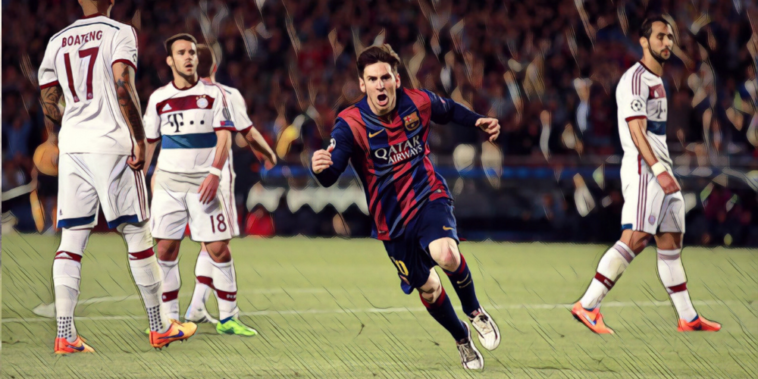 Bayern Munich and Barcelona meet in the Champions League’s group stage this evening, a clash between two of European football’s royalty and often regular contenders for club football’s biggest prize.

Both teams began their campaign with a win on Matchday one and the winner of tonight’s clash will be in a strong position to reach the knockout rounds, in a group dubbed the Group of Death that also contains Inter Milan.

Tonight’s fixture will be the latest instalment of a fascinating rivalry between two clubs who have contested some huge nights on the Champions League stage.

Ahead of the game, we look back at five of the most memorable modern meetings between Bayern Munich and Barcelona.

The 1998/99 season saw Barcelona and Bayern Munich drawn together in the Champions League’s group of death, with the former’s reward for being crowned Spanish champions a group stage containing both the German giants and Manchester United.

The first meeting between the sides saw Bayern edge a narrow 1-0 win in Munich, with the return at the Camp Nou proving a crucial contest in the outcome of group progression.

Ottmar Hitzfeld’s side produced an impressive performance to seal a second win over Barcelona and take control of the group, recovering from a half-time deficit as Hasan Salihamidžić’s 87th-minute winner sealed all three points for the visitors.

Bayern progressed as group winners and reached the final, where the Germans suffered an agonising late defeat as former group stage opponents Manchester United scored twice in stoppage-time to snatch the Champions League trophy in dramatic fashion. Barcelona were eliminated, with just three points separating Bayern, United and the Spaniards in third.

Barcelona’s first season under the management of Pep Guardiola ended in a historic treble success, with the Catalans conquering all before them to win La Liga, the Copa del Rey and the Champions League.

Their run to Champions League success included a 4-0 thrashing of Bayern Munich in the quarter-finals, dismantling the reigning Bundesliga champions with Lionel Messi the architect of their success.

Bayern had beaten Sporting Lisbon 12-1 over two legs in the previous round, but had no answer for Messi’s genius as Barcelona ran riot to secure an emphatic first-leg advantage.

Messi opened the scoring after collecting Samuel Eto’o’s pass to roll home, before he turned provider for the Cameroonian to double the Spanish side’s advantage.

Messi made it three as Jurgen Klinsmann’s side – beaten 5-1 by Wolfsburg in their previous fixture – were ruthlessly exposed for the second successive fixture, before Thierry Henry made it 4-0 to Barcelona before the interval.

Bayern improved after the break but found themselves well beaten by a Barca side who progressed to a semi-final meeting with Chelsea.

Four seasons after their battering in Barcelona, Bayern Munich made the trip to the Camp Nou for another showdown in the Champions League’s latter stages,

The Bavarians had emerged as the red-hot favourites for the trophy after thrashing Barcelona 4-0 in the first leg meeting in Germany, but refused to take their foot off the gas to complete a record Champions League semi-final aggregate win.

Bayern had been in menacing mood during the first meeting and continued in a similar vein in the return, opening the scoring through a brilliant goal from Arjen Robben as the winger cut inside to bend a trademark finish into the top corner.

Barcelona struggled to deal with the threat of Robben and Franck Ribery throughout, with Bayern doubling their advantage as Gerard Pique shinned the latter’s cross into his own goal

Thomas Muller – who had scored twice in the first leg win – made it 7-0 on aggregate after heading in at the back post, sealing an emphatic success as Bayern marched on to an all-Bundesliga final against Borussia Dortmund at Wembley.

Iconic Duos: Robben and Ribery – The wing wizards who defined a decade

Recent encounters between the teams have tended to be one-sided affairs, with Barcelona exacting semi-final revenge on Bayern during the 2014/15 season.

The first leg saw Barcelona take a commanding lead in the tie, scoring three times inside the final 13 minutes to all but end the semi-final as a contest.

Bayern had proven stubborn opposition across the opening exchanges, but Barcelona’s firepower of Lionel Messi, Luis Suarez and Neymar ultimately proved the difference.

It was Messi who took control of the contest after opening the scoring with a low strike from outside the area, before a brilliant individual goal saw the Argentine leave Jerome Boateng on the turf and dink a delightful finish over Manuel Neuer.

Bayern pushed forward in search of an away goal as Pep Guardiola desperately sought to narrow the deficit against his former side, but the visitors were punished on the break as Neymar raced away to make it three in stoppage time.

Bayern won the second leg 3-2, but it was not enough to stop a free-scoring Barcelona from progressing on their way to a treble under Luis Enrique.

Iconic Performances: Prime Messi twists Bayern Munich inside and out

The clash was a one-legged encounter in the neutral venue of Lisbon as the Champions League was reformatted in the wake of the coronavirus pandemic, with the fixture producing a scintillating performance from Bayern in the Portuguese capital.

Hansi Flick’s side were rampant in a performance packed with intensity, pressing and cutting edge, scoring four goals before half-time to expose the Catalan side’s defensive flaws.

Insult was added to the serious Barcelona injuries as Philippe Coutinho – on loan at Bayern from the Spanish side – came off the bench to score twice against his parent club, as a shellshocked Barcelona were hit for eight goals in an unforgettable result.

Bayern’s win was their 19th successive victory in all competitions, as the Bavarians enjoyed a stunning season to win a Bundesliga, DFB-Pokal and Champions League treble.