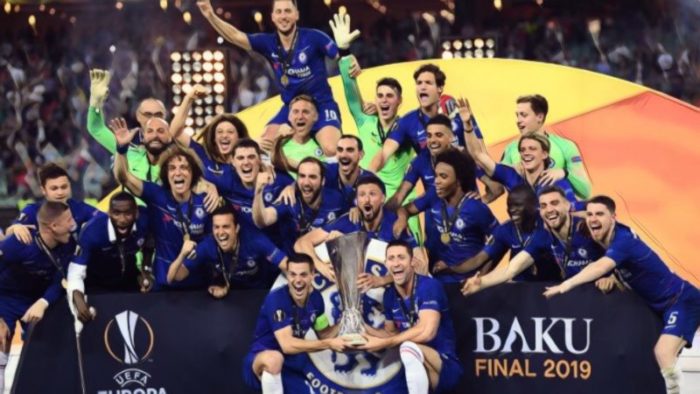 The Europa League qualifying rounds are underway as Europe’s secondary tournament gears up for another season of thrills and spills.

Manchester United, Arsenal and Wolves are the Premier League’s representatives this season, and each will be hoping to succeed Chelsea by lifting the trophy this season.

The English continent will once again be heavily fancied after last season’s all-English showpiece, but who are the favourites to win the trophy this season?

So for those of you who like a bit of online betting, here are the five favourites to win the 2019/20 Europa League…

The Italian side are currently undergoing a transitional period, having fallen slightly in Serie A in recent seasons and seeing stalwarts such as Kostas Manolas and Daniele De Rossi depart this summer.

Having reached the knock-out stages of the Champions League in each of the past two seasons, including the last four two years ago, Roma have recent pedigree in Europe and will be competing in the Europa League for the first time since 2016.

Runners-up in 1991, Roma have failed to go past the quarter-final stage of this tournament in 12 attempts since, but could prove dark horses this coming campaign.

Highly-rated young talents such as Nicolo Zaniolo and Cengiz Under are complemented by experienced stars Edin Dzeko and Alessandro Florenzi, and under former Porto and Shakhtar Donetsk boss Paulo Fonseca, Roma could go far.

The Spanish side will be looking to win a record-extending sixth title, having enjoyed unprecedented success in this competition winning the tournament five times since 2006.

Those successes include three consecutively between 2014 and 2016, and few possesses the EL knowhow of the La Liga side. Having finished sixth in the Spanish top flight last season, Sevilla are now under the guidance of former Real Madrid and Spain coach Julen Lopetegui and have spent over £130m this summer strengthening their squad.

Key players Wissam Ben Yedder and Pablo Sarabia may have departed in big-money moves to Monaco and Paris Saint-Germain respectively, though Sevilla have bolstered their squad with no fewer than 13 new additions.

Notable amongst them are the signings of wingers Rony Lopes and Lucas Ocampos from Ligue 1 sides Monaco and Marseille, whilst PSV Eindhoven forward Luuk De Jong brings experience.

Porto midfielder Oliver Torres looks a sensible addition, whilst it will be interesting to see how Israeli international Moanes Dabbur handles the step up after scoring 72 goals in 126 appearances at Austrian side Red Bull Salzburg.

The Spaniards may have enjoyed a summer of overhaul, but few possess their pedigree in European competition and they are rightly considered amongst the Europa League favourites.

Europa League regulars in recent seasons, the Italian side are considered amongst the favourites to win a first European trophy since winning the UEFA Cup Winner’s Cup and UEFA Super Cup 20 years ago.

Star duo Ciro Immobile and Sergej Milinkovic-Savic remain in the Italian capital and both will be key to their hopes of success, with Lazio looking to build on last season’s Copa Italia triumph.

Lazio reached the round of 32 stage last season before being eliminated by Sevilla, they will hope to improve on that showing this time around.

Last season’s runners-up, Arsenal will be hoping to go one better this season under Europa League specialist Unai Emery. The Spaniard won three consecutive trophies with Sevilla between 2014 and 2016, and showed his pedigree once more by guiding Arsenal to a first European final in 13 years last season.

With the fight for a top-four finish in the Premier League perhaps tougher than ever, the Europa League could offer Arsenal an alternative route back to Champions League football after a three-year absence.

The North London side strengthened significantly this summer, adding the likes of Dani Ceballos, David Luiz and spending a club-record £72m on Lille winger Nicolas Pepe.

The Ivory Coast winger adds to a wealth of attacking options including Pierre Emerick-Aubameyang and Alexandre Lacazette, and that duo will once again be key to their hopes of winning the trophy after firing 13 Europa League goals between them last season.

Winners of the tournament under Jose Mourinho in 2017, Manchester United are back in the Europa League after failing to secure a top-four finish in the Premier League last season.

Club legend Ole Gunnar Solskjaer is embarking on his first full season as the club’s new manager, with a focus on youth, energy and pace as he bids to restore the side to former glories.

English football’s most decorated club, United will always be amongst the favourites for silverware and begin the new Europa League campaign as the tournament favourites.