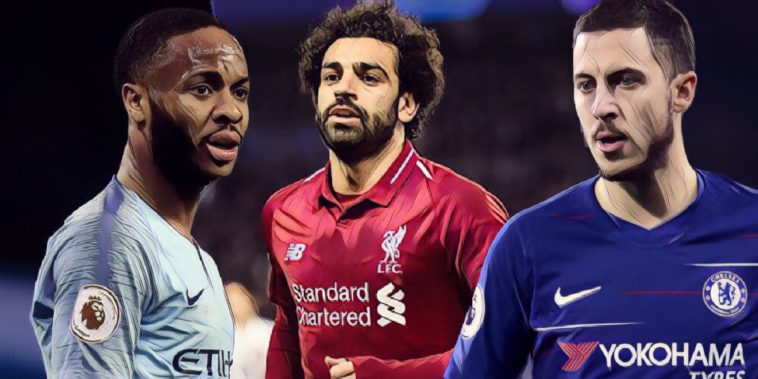 As we enter the second part of this hugely entertaining Premier League season, a clearer picture is emerging in terms of who will be picking up the English games most prestigious awards at the end of the season.

Of course, the biggest prize for clubs in the English top-flight is the Premier League crown, and it’s safe to say that that trophy will be ending up at either Anfield or the Etihad come May.

However, there are also plenty of individual awards left to play for and the PFA Players Player of the Year Award is undoubtedly the most prestigious of these gongs. It’s great for any player to receive adulation from fans and the media, but being voted the best by your fellow pro’s is definitely the most rewarding prize for footballers.

For those of you who like a bit of online betting, we’ve put together a list of the five favourites to win this seasons award.

Manchester City’s attacker has been dominating the headlines this season after he quite rightly called out some of the disgraceful racial bias regularly perpetrated by sections of the UK media, and sadly, that has distracted many people from what a wonderful season the 24-year-old is having on the pitch.

England international Sterling continues to cement his place as one of the Premier League’s most consistent forward players, with nine goals and seven assists in 19 appearances for the reigning Champions. Not bad for a player who can’t finish.

After shining brightly for Belgium during the summer at the World Cup, Hazard began this season in electric form for Chelsea.

And while many fans and pundits have been quick to point out that the mercurial 28-year-old’s form has dropped off a little in recent months, he’s is one of only two players in Europe’s major leagues to have reached double figures in terms of both goals and assists – the other player is some lad called Messi.

Salah won this award last season after breaking the record for the most goals in a 38 game Premier League season, with a sensational 32 strikes for Liverpool.

Although many have suggested that the Egyptian has failed to replicate his amazing form from last campaign, he is currently joint top of the scoring charts with 14 goals and is thriving in a more central role.

If Liverpool are to maintain their current lead at the top of the table and win their first ever Premier League title, Salah’s goals will undoubtedly have a massive part to play.

Spanish midfield maestro Silva would be many a neutral’s pick for the award due to his superb levels of consistency in the top flight side since joining City in 2010. Nicknamed Merlin by his teammates for his magical ability with the ball at his feet, the 33-year-old remains a key man in Pep Guardiola’s star-studded midfield.

Silva recently became Man City’s all-time leading Premier League appearance maker and he will be hoping his side can overhaul current leaders Liverpool and win his fourth top-flight title.

Many an eyebrow was raised last January when Liverpool paid Southampton a world record transfer fee for a defender of £75 million for 27-year-old Van Dijk. However, the Dutchman has been nothing short of imperious since his arrival at Anfield, instantly solving the Reds long-standing issues at the back.

There can be little doubt that Van Dijk has established himself as one of the best centre-backs in World Football over the last 12 months, and is the key reason that Liverpool have conceded a miserly 10 goals in 22 top-flight games this season.

Van Dijk’s superb performances for Jurgen Klopp’s side make him the overwhelming favourite to win the PFA Player of the Year award, regardless of whether Liverpool win the Premier League title this season.