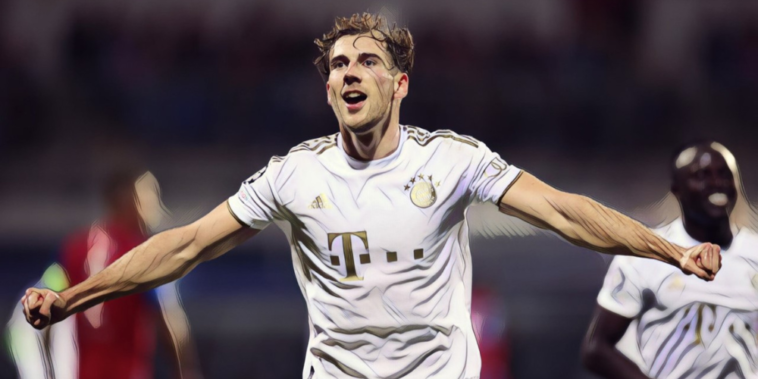 Our UEFA Champions League Team of the Week is back after a fascinating round of fixtures in Europe’s top club competition.

Manchester City became the first Premier League team to secure their place in the knockout rounds after a goalless draw at Copenhagen, though Chelsea, Liverpool and Spurs all took a step towards the last 16 after crucial wins.

Napoli continued to underline their credentials as dark horses with another impressive performance, while Club Brugge secured progression for the first time in the Champions League era.

Club Brugge are into the Champions League’s knockout rounds for the first time as the club’s impressive campaign continued with a goalless draw with Atletico Madrid.

Brugge have been the surprise package of the Champions League season to date and have reached the last 16 without a single goal conceded. Former Liverpool goalkeeper Simon Mignolet produced a spectacular performance in the draw with Atletico, to earn his fourth consecutive clean sheet.

14 – Simon Mignolet has made 14 saves without conceding against Atlético Madrid in the UEFA Champions League this season, the most saves on record against an opponent without being beaten in a single season in the competition (2003-04 onwards). Gandalf. pic.twitter.com/55iP3FFJym

Among his finest saves was a full length dive to keep out Joao Felix’s powerful free-kick, as he set a new Champions League record for the most saves against a single opponent without conceding a goal in the competition’s history.

Five years ago, Giovanni Di Lorenzo was playing his football in Italy’s third division. Right now he is captaining the most impressive side of the Champions League season to date.

The 29-year-old led Napoli to a fourth consecutive win in the group stage with a 4-2 win over Ajax, with Luciano Spalletti’s side having now scored 17 goals in just four fixtures. Di Lorenzo – who was named man of the match in the 6-1 win at Ajax last week – was impressive again as the full-back marauded forward and defended diligently.

Real Madrid rescued a late point against Shakhtar Donetsk as the holders remained on course to reach the last 16. The Spanish giants were tested during a tough contest at the Bernabeu, with Antonio Rudiger excellent at centre-back for the home side.

The Germany international won seven duels, made five clearances and three interceptions, while he rescued his side with a 95th-minute equaliser at the death. It was a brave header from the defender, who received a war-wound after clashing heads with Anatoliy Trubin. He will care little, however, after earning his side a result.

Tanguy Nianzou departed Bayern Munich during the summer in search of a regular role and is beginning to develop into a central figure at Sevilla.

The 20-year-old became the club’s youngest ever Champions League goalscorer after opening the scoring in the 1-1 draw with Borussia Dortmund this week, a result which kept alive Sevilla’s fading hopes of reaching the knockout stages.

1 – At 20 years and 126 days, Tanguy Nianzou 🇫🇷 has become the youngest player to score for Sevilla in the Champions League, beating Diego Perotti's 🇦🇷 previous record against CSKA Moscow in March 2010 (21 and 233). Hope. pic.twitter.com/OuOXiz2MH2

The centre-back was an impressive performer in a mature performance on this stage, while his header – guided perfectly into the bottom corner after meeting Ivan Rakitić’s free-kick – was a history-making moment.

David Raum impressed as RB Leipzig won 2-0 at Celtic to move second in Group F. The Bundesliga side came out on top in an entertaining contest at Parkhead, as Leipzig rode their luck on occasion before scoring two late goals to earn all three points.

Raum – whose chance creation from full-back led to a move to the Red Bull Arena during the summer – was a constant outlet for his side and won 9/10 duels, three tackles and created two big chances for his side.

David Raum was RB Leipzig's standout player as they beat Celtic 2:0 in Glasgow:

Bayern Munich secured their passage to the next round as the Bundesliga champions continued their perfect start to the competition.

Leon Goretzka was at the heart of a first-half performance that blew away Viktoria Plzen, as Bayern raced into four-goal lead before half-time. The midfielder has shown signs of getting back to his domineering best of late and created the opener after a quick one-two with Sadio Mane.

Goretzka then scored two of his own after Thomas Muller had doubled Bayern’s lead, with his second an audacious chipped finish after being sent through on goal by Leroy Sane. It’s now six goal involvements in three games for Goretzka whose runs into advanced areas will have pleased Julian Nagelsmann.

Leon Goretzka has scored or assisted 6 goals in his last 3 appearances:

Maccabi Haifa produced the upset of the round after beating Juventus 2-0 to record their first points of the Champions League season.

The Israeli side secured their first group stage win since a 3-0 triumph over Manchester United in October 2002, with Omer Atzili scoring both goals to pile the pressure on Juventus.

Atzili – who was named as Israeli Footballer of the Year in 2021/22 after leading the division for goals and assists – scored his first after meeting Pierre Cornud’s cross with his back, before a brilliant finish into he top corner double sealed a well-deserved and famous win.

Mohamed Salah’s form has been scrutinised this season, but the Egyptian provided an emphatic response to his critics as Liverpool ran riot at Rangers.

Salah came off the bench to score a second-half hat-trick for the Reds, with his treble the fastest in Champions League history at just six minutes and 12 seconds. It was a clinical display of finishing from Salah, who now has five goals in just three Champions League starts this season.

Salah’s treble also took him to 38 goals in the competition for Liverpool, moving him past Didier Drogba and Sergio Aguero for the most goals scored for a single English club.

His return to form at Rangers appears timely, ahead of a huge showdown with Manchester City at Anfield this weekend.

Spurs took a huge step towards the knockout rounds with a hard-fought 3-2 win over Eintracht Frankfurt. The two teams were level on points in the group and were unable to be separated a week ago, but Son Heung-min’s double inspired Antonio Conte’s team to three points this time around.

The South Korean looked back to his best in an electric performance, as Spurs came from behind to win. He fired in a clinical equaliser – the 50th goal combination between Son and Harry Kane in all competitions – and added a superb second with an emphatic volley.

Can you catch that any sweeter?! 💥

After a somewhat sluggish start to the season, Son looked full of his usual endeavour, sharpness and confidence around goal.

Roberto Firmino’s fine form continued with an important performance as Liverpool came from behind to thrash Rangers in Glasgow.

The Brazilian’s goals have been a highlight in an otherwise poor start to the season for Jurgen Klopp’s side and he added two more to his total in the 7-1 success at Ibrox.

What a season Roberto Firmino is having 🔥 pic.twitter.com/mLZGbDohve

Firmino headed home Kostas Tsimikas’ corner to equalise for Liverpool, before a display of composure to score his second. The forward proved a handful all evening and added an assist with a flick into the path of Darwin Nunez, on a pleasing night’s work for Liverpool’s number nine.

Robert Lewandowski’s brace earned Barcelona a late point in an entertaining 3-3 draw with Inter Milan at the Camp Nou.

After defeat in the reverse fixture last week, defeat would have eliminated the Catalans but the club maintain a fighting – if slim – chance of reaching the next stage after Lewandowski’s rescue act.

The Poland international scored twice late on, as Barcelona fought back to level on two occasions. His second was an exquisite header in stoppage-time, the sort of high-calibre finish we’ve become accustomed to from a generational great.

He will be crucial ahead of a must-win showdown with former side Bayern next time out.