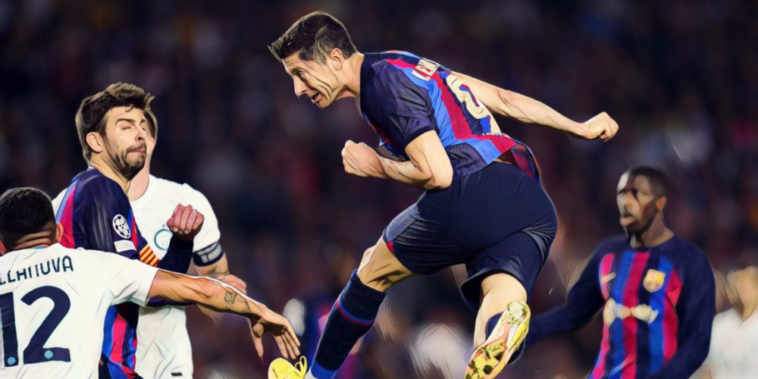 Our weekly Champions League awards honour the best – and worst – of the midweek European action.

Barcelona signed Robert Lewandowski with hopes that the forward could decide the biggest games in club football. The marquee man might just have kept the club’s hopes of Champions League progress alive after a late rescue act on Matchday 4.

Barcelona took on Inter Milan in a clash of two former champions looking to return to former glories. Inter had edged the previous meeting and looked set to eliminate the Spaniards in the return, after twice taking the lead in the second half.

Lewandowski had levelled for a first time in a frantic game at the Camp Nou, but Robin Gosens’ goal looked to have won it for Inter late on.

Barcelona fought back to stave off Champions League elimination vs. Inter 🤯

Step forward the Spaniards’ star signing, who rose to meet Eric Garcia’s cross in stoppage time to snatch a point. It might not be enough for Barcelona, but Lewandowski’s goalscoring genius has handed Xavi and his side a lifeline.

Having fallen behind at a raucous Ibrox, Firmino kept his cool in the cauldron to bring Liverpool back into the game. He showed great desire to meet Kostas Tsimikas’ corner to bring the sides level, before turning home Joe Gomez’s searching cross to put the Reds ahead.

There was even time for a wonderful flicked assist into the path of Darwin Nunez, as Firmino moved to 10 goal involvements in 12 appearances this season.

What a season Roberto Firmino is having 🔥 pic.twitter.com/mLZGbDohve

His match-winning performance at Rangers saw Firmino pass Steven Gerrard for UCL goals for Liverpool, while he also levelled Gerrard and James Milner for the most assists in the competition for the club (12).

Viewed as arguably the most dispensable of Liverpool’s forward assets last season, he is irreplaceable to Jurgen Klopp’s side on current form.

Congratulations, Club Brugge. Carl Hoefkens’s side have become just the second Belgian side to reach the knockout rounds in the Champions League era.

Brugge have done so without conceding a single goal and the club’s mix of exciting young talent and defensive discipline has seen them become the surprise package of the competition so far.

Club Brugge qualified from the Champions League group stage for the first time ever with four clean sheets in four games 👏 pic.twitter.com/E8kDBxdDJl

Former Liverpool goalkeeper Simon Mignolet was outstanding against Atletico Madrid this week and has recorded 14 saves across his two clean sheets against the Spaniards – a record against a single opponent.

Porto produced an impressive performance to beat Bayer Leverkusen 3-0 and edge closer to qualification, with three points moving the Portuguese side up to second in Group B.

Galeno set Porto on their path to success with the game’s opening goal at the Bay Arena, as he collected goalkeeper Diogo Costa’s raking pass before ghosting inside to fire home.

The perfect first touch. The confident side-step past the defender. The crisp finish.

Top-drawer from the Brazilian.

What a way to stamp your mark on the game! 🤩

Galeno opened the scoring for Porto inside 6 minutes with this absolute gem of a goal… 💎#UCL pic.twitter.com/rZLndmqEQW

Fikayo Tomori’s reunion with Chelsea has not gone as planned. The defender has made huge progress since swapping Stamford Bridge for the San Siro, but back-to-back defeats against his former employers have left AC Milan’s qualification hopes in doubt.

Tomori was sent off just 18 minutes into Milan’s 2-0 loss to the Blues this week, becoming the first English player to be sent off against an English side.

1 – Fikayo Tomori is the first English player to get sent off in a UEFA Champions League game against an English side. Dismissed. pic.twitter.com/u0X7B0DDLD

Can Max Allegri survive this?

Juventus’ decline reached a new low this week as the Bianconeri suffered one of the most embarrassing European defeats in their history.

Juventus were emphatically second-best to lose 2-0 at Maccabi Haifa, in a loss which leaves the Italian giants all but eliminated from the competition.

Allegri was given a show of faith from the board this week, but that trust must surely be dwindling after losing to a side without a Champions League group stage win since October 2002.

Omer Atzili – the reigning Israeli Footballer of the Year – scored both goals on a famous night for Maccabi.