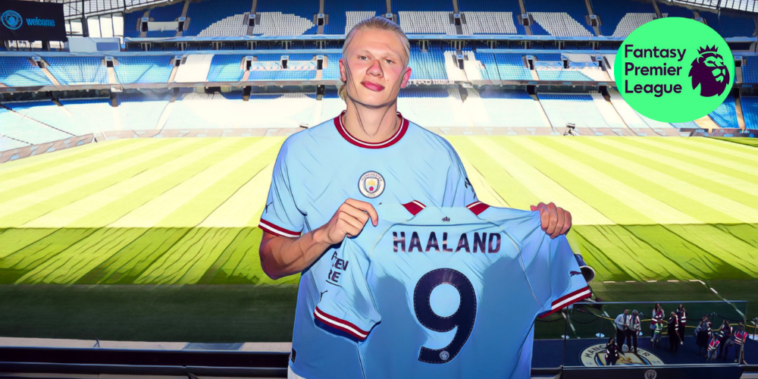 Fantasy Premier League is back for a new season of the ever-popular game, with managers drafting, drafting and re-drafting their squads ahead of the season’s kick-off in August.

A new season brings new faces into the game and ahead of the FPL campaign we’ve decided to look at five summer signings who should be considered for your squad.

Inter-Premier League transfers have not been included, with all our suggestions names that didn’t feature in FPL last season.

An obvious one, but the arrival of one of world football’s finest forwards at Manchester City has piqued the interest of FPL managers.

Haaland is already the most selected player in FPL ahead of gameweek one, finding himself in a huge 63.8% of squads at the time of writing.

It’s with good reason that FPL bosses have flocked to the forward, who has scored a staggering 115 goals in just 116 appearances across spells at Red Bull Salzburg and Borussia Dortmund.

Thank you for making me feel so welcomed and loved! 💙 #mancity pic.twitter.com/2CjZaUrcq1

Haaland’s meteoric rise has seen the 21-year-old obliterate a whole host of goalscoring records and the prospect of the Norwegian receiving service from City’s cast of creatives is a frightening one for Premier League defences.

Haaland isn’t the only headline arrival this summer however, with Liverpool having signed Darwin Nunez in a deal that could reach a club-record fee of £85m.

Nunez exploded at Benfica last season, scoring 34 goals in 41 appearances including in both legs of the Portuguese side’s Champions League quarter-final with his new club.

Priced at £2.5m cheaper than Haaland, he could prove the go-to forward should he hit the ground running at Anfield this season.

Nunez’s arrival points to a different direction for Jurgen Klopp and his team, with the Uruguayan a traditional number nine and of contrasting profile to the Reds’ current forward options.

He will be given time to settle in with Diogo Jota an alternative option through the middle, though Nunez should be one to watch during the season’s opening weeks.

Brentford’s shrewd business in the transfer market has turned the Bees into a Premier League outfit, with Thomas Frank again looking for value and potential in the summer window.

Frank has broken the club’s transfer record to sign Aaron Hickey from Bologna, with the Scotland defender having shone during a breakthrough season in Serie A.

Hickey took the bold decision to swap Hearts for Italian football in 2020, turning down interest from bigger clubs in Europe in order to earn a regular role in the side.

Hickey’s versatility in operating on both flanks will increase his minutes at Brentford and he has shown already in a fledgling career the attacking threat he can provide from full-back.

Leeds have been among the biggest spenders of the summer transfer window, investing the funds received from Kalvin Phillips and Raphinha into multiple new signings.

Perhaps the most exciting arrival is that of Luis Sinisterra from Feyenoord, with the winger arriving as a direct replacement for Raphinha.

Last season the Colombia international excelled for the Dutch side, scoring 23 goals and providing 14 assists in 49 appearances as Feyenoord finished third in the Eredivisie and reached the Europa Conference League final.

Rated ahead of Dusan Tadic and Sebastian Haller as the best performing Eredivisie player of last season according to WhoScored, he will add attacking impetus to Jesse March’s new-look side.

Ivan Perisic’s classification as a defender will make the Croatian a popular selection, having joined Tottenham on a free transfer from Inter Milan this summer.

Despite turning 33 earlier this year, the wing-back remains an all-action presence on the flanks and is expected to excel under Antonio Conte this season.

Perisic performed under Conte at Inter Milan and is expected to occupy the left wing-back role at Spurs this season, where he will be given plenty of licence to get forward and join the attack.

🆓 Tottenham have reunited the Croat with Antonio Conte on a free transfer this summer. Terrific business as explained 👇

Perisic scored eight goals and provided seven assists in 35 league appearances for Inter last season, the sort of numbers that will make him essential as a defender if replicated in English football.

Sam Johnstone will return to the Premier League this season, having joined Crystal Palace on a free transfer in a bid to improve his hopes of making England’s World Cup squad.

Johnstone was named as West Brom’s Player of the Season during his last Premier League campaign in 2020/21, but was unable to keep the club in the division despite a number of outstanding saves.

Eagles! Thanks for the warm welcome so far. Ready to give everything for the shirt and can't wait to see you all at Selhurst 🔴🔵🦅 pic.twitter.com/H1WkjeQS6l

He will be afforded significantly better protection at Crystal Palace this season, with the Eagles having recorded more clean sheets than any other team outside the top five last season.

Johnstone faces competition from Jack Butland and Vicente Guaita for the number one position but will be confident of claiming first-choice status.