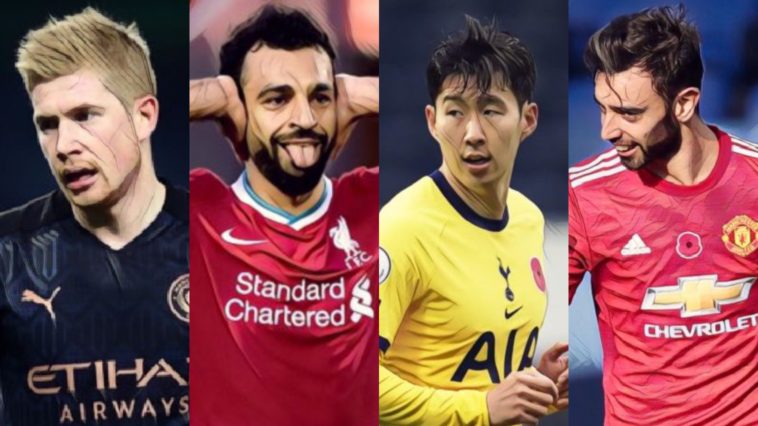 Now that we’re in the thick of the festive football action, it’s more important than ever to get your Fantasy Premier League transfers and decisions right with the quick turnaround in FPL deadlines.

In this week’s FPL tips column we look at how to somehow squeeze all of the big hitters into your squad, a Manchester United differential bang in form, and what the recent news of the upcoming blank and double gameweeks means for our fantasy plans.

Make sure you’re subscribed to The Fantasy Faithful podcast for all the latest tips and discussion on all things FPL.

How to fit four premium midfielders in your team

One of the big FPL narratives this season has been which premium midfielders to favour in your team, with Mo Salah (£12.4), Bruno Fernandes (£11.0), Kevin De Bruyne (£11.9) and Son Heung-min (£9.6) all being highly coveted assets.

With the exception of Son, these players are the most expensive in the game, so it’s only possible to have two, maybe three of them in your side at any given time. It can mean you lose out on major points hauls if you get the ‘wrong’ ones; this week for instance, despite having easier fixtures both De Bruyne and Fernandes blanked, while Salah and Son scored when Liverpool hosted Tottenham Hotspur.

The opportunity cost can be brutal at times, but what if it doesn’t have to be? What if you could have them all? It may seem a fanciful notion, but it’s possible if you shuffle your decks.

Firstly, you’ll need to shift your premium forwards. The majority of FPL managers will have Harry Kane (£10.9) or Jamie Vardy (£10.3) in their teams. Some of you still have Timo Werner (£9.4) for some reason. It’s a tough decision to make, but you’ll need to get rid of them to make this work.

The pertinent question to ask here is: is it worth selling those players? Kane and Vardy have 34 goal involvements between them and are second and third respectively in the form guide (average points per match over the last five fixtures) among forwards. Scroll down a bit, however, and you will find the likes of Che Adams (£6.0), Patrick Bamford (£6.1) and Callum Wilson (£6.6) not far behind.

Neither of those three are going to be as consistent in front of goal as Kane and Vardy, but the difference in price is a trade-off worth making. Adams is playing exceptionally well in an impressive Southampton team, Bamford is getting big chances in every match for Leeds, while Wilson is Newcastle’s talisman right now.

This should give you enough money in the bank to bolster your midfield with the four premium options, provided you’ve also downgraded in a couple of other areas too. Each of them are ahead of Kane and Vardy in the form table and generally speaking the highest scoring players in the game are midfielders, so it should work out in the long run.

And you could always take the approach of FPL Foxy and go full steam ahead with Jack Grealish (£7.8) thrown in for good measure:

Who would you captain troops? Let me know your logic pic.twitter.com/be13Y3kf6k

This strategy, however, would mean having a defence made up entirely of bargain bucket players and likely a dreadful bench to boot.

Rashford the cheekiest of differentials?

Marcus Rashford (£9.4) came firmly back into view following a stellar performance against Sheffield United that saw him bag a brace in the 3-2 win. The Manchester United striker has enjoyed an uptick in form lately, returning a goal or assist in four of his last six league matches.

The England forward has been overlooked by many in favour of the phenomenal Fernandes, who is currently owned by over 42% of FPL managers. But he only has three fewer goal involvements than the Portuguese playmaker after Thursday’s match and seems to be back to his best form.

The major drawback to having Rashford over Fernandes is penalties, which the midfielder has been taking for the club since February. But Paul Pogba’s return to form of late could mean a relative decrease in Fernandes’ returns while boosting Rashford at the same time.

That nutmeg 😲
That turn of pace 😱#MUFC @MarcusRashford pic.twitter.com/kT6lnEB78Q

While Fernandes was still heavily involved in build-up play at Bramall Lane, but Pogba was the one playing the more incisive passes on the night, culminating in the number 18’s first blank in an away game since signing in January.

Man United benefitted from some poor goalkeeping by Aaron Ramsdale and the Blades’ high line, which won’t always be the case, but Rashford could find himself in some dangerous positions to score yet again this weekend. Only two teams have conceded more shots (67) than Leeds United over the past four gameweeks, while they top the league for expected goals conceded (7.93 xG) over that period.

Planning for the DGW starts here

With the announcement of when the first double gameweek of the season is taking place and which teams are featuring in it, we can finally start planning towards it in January. Ten teams will be playing twice in gameweek 19, meaning there will only be five games in gameweek 18.

We will be providing a special tips guide closer to the blank and double gameweeks, but our main advice for now is to factor these gameweeks into every FPL transfer decision you make between now and then.

The likelihood is you are going to have to use one or more chips around that time, but it’s imperative you bring in players you’re going to actually want in GW19. For instance, you might be tempted by Ademola Lookman at the moment, but Fulham play Chelsea and Man United in the same week, a rotten pair of fixtures.

Read: Fantasy Premier League: Four of the best captaincy picks ahead of gameweek 14