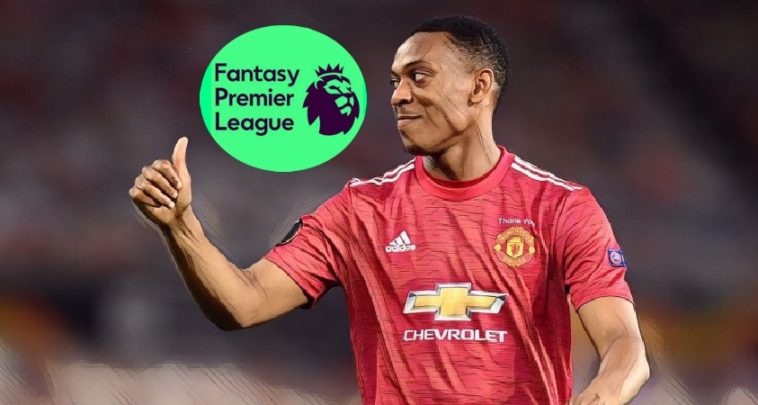 With just six matches taking place in gameweek 18 of Fantasy Premier League, we’ve picked out the best players from the twelve teams taking to the field.

We’ve focused on the non-premium FPL players to find the most essential assets, with some cheeky differentials thrown in for good measure.

A striker with just two league goals to his name this deep into the season is almost never going to be on our radar, but we have to make an exception for Anthony Martial. The Frenchman has struggled badly for much of the campaign, but in the past four gameweeks he has one goal and three assists.

In that time Martial leads the league among forwards for assists, big chances created (3) and expected assists (1.25xA), but he’s also getting opportunities in front of goal; he has had ten chances, seven of which came from inside the box, which compares well with the in-form strikers of right now.

Manchester United‘s 11 goals is the most scored by any team in the Premier League over that same period, highlighting just how much they are on fire at the moment. With Bruno Fernandes and Paul Pogba in great form, there will be plenty of chances laid up for the forward in the coming weeks.

The big worry with Martial is the potential for Edinson Cavani to eat up some of his minutes. The Uruguayan has been excellent for United whenever he has played and will be fresh for the Burnley game after serving his three-game ban. That said, he’s only played one full 90 in the league since joining.

It’s been a strange old time for Phil Foden at Manchester City this season. The midfielder finally made his big breakthrough last season after he turned 20, being one of the team’s best players down the stretch.

This season the U17 World Cup winner has been in and out of the team, losing minutes to newcomer Ferran Torres, and has come nowhere near the heights he reached just a few months ago. But due to the Spaniard testing positive for Covid-19 this week, he started for the first time in the last 11 league matches.

The English youngster took the opportunity with both hands, scoring and assisting in the 3-1 win over Chelsea on Sunday evening. But more than that, he passed the eye test with flying colours, proving he belongs in the side ahead of Torres.

With City there is always the threat of Pep Roulette, but there’s no way Foden should lose his place in the starting lineup. Otherwise, Guardiola really is bald. If you are worried about rotation, though, and can afford him, then bag yourself Kevin De Bruyne (£11.6).

Just last month you could make an argument that Arsenal were in a relegation battle. Three successive wins later and the situation has changed somewhat, thanks to an injection of youthful exuberance.

Emile Smith Rowe and Gabriel Martinelli have joined forces with Bukayo Saka to help turn around the Gunners’ season, with the latter bursting into great form of late. The diminutive winger has four goal involvements (two goals, two assists) in his last three matches, proving to be an integral part of their turnaround.

Can Saka, and by extension Arsenal, keep it up? He’s only made five key passes in the past four gameweeks, but he has taken 12 shots (nine inside the box), which is fourth in the league among midfielders and first for Arsenal players. He is a central figure in their attack and a guaranteed starter.

Alexandre Lacazette (£8.2), four goals in his last four games, is another solid option against a Crystal Palace team that has conceded 11 goals over the same period, the second-most in the league.

If you’re on a Free Hit for GW18, then there’s no other option in goal in this writer’s opinion. Karl Darlow has been exceptional between the sticks for Newcastle United this season, standing in for the injured Martin Dubravka.

The Englishman has only kept three clean sheets from 16 Premier League matches this season, but he’s also had to make 58 saves, the fourth-most of any goalkeeper. Those save points can easily lead to bonus points if the Magpies do keep a clean sheet.

And we reckon they absolutely should against a Sheffield United outfit that have scored just eight goals in 17 league matches. The Blades have failed to score in their last three matches and look destined for the drop.

Karl Darlow has a 71.76% save percentage in the Premier League this season, the highest of any goalkeeper to face 200+ shots.

Just like the two Manchester clubs, the beauty of Aston Villa‘s assets is that they will be playing three times over the next two gameweeks. And one of their most in-form players is Anwar El Ghazi.

The left winger has been averaging 7.3 points per game over the past five gameweeks, the third best rate among midfielders in FPL. He has somehow managed to make more shots (26) than anyone by a mile in that period, while no one can better his goals (4), big chances (5) or expected goals (3.31xG) either.

The clincher? El Ghazi is on penalties for Villa. And at his price point that makes him one of the most attractive options in the game. In GW19 they face Spurs at home, a tough fixture that might determine whether or not Villa are surprise challengers for the top four or simply pretenders. But as they demonstrated against Man United, they are capable of competing with the (joint) best teams in the league.