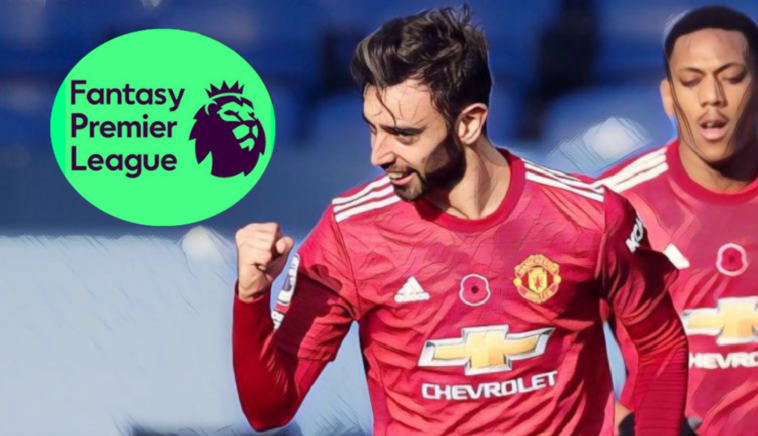 We pick out three of the best contenders for captaincy in gameweek 9 of Fantasy Premier League, looking at the in-form players and the teams they’re facing this weekend.

Make sure to listen to this week’s episode of The Fantasy Faithful podcast in which we discussed the big FPL topics ahead of the weekend, including what to do with the absent Mo Salah, whether to sell or hold onto Son Heung-min and Harry Kane, and our differential picks.

Undoubtedly the most attractive captain’s pick of gameweek 9, Bruno Fernandes has been transferred in by just under 700,000 FPL managers this week in anticipation of Manchester United‘s meeting with relegation battlers West Brom.

The Red Devils have been the definition of hit and miss this season, but Fernandes has been as consistent as ever, scoring five goals and making three assists in eight league games. Even when United are poor, there’s always the chance he will make something of nothing.

Since making his premier league debut no player has scored more FPL points than Bruno Fernandes. 170 points in just 21 games at an average of 8 PPG. The next highest is salah with 151 points. #FPL #FPLCommunity

Saturday’s opponents have been wojous in defence, conceding more goals (17) than any other team. West Brom allow a lot of high quality chances in the box too, conceding 1.67xG per 90, the second-worst in the league after Leeds. They did, however, make life difficult for Spurs in gameweek 8 and will no doubt attempt something similar this weekend.

Man United have found the going tough against packed defences, but usually only the teams that are good at it. They smooshed Newcastle earlier this season and the Baggies surely won’t be able to withstand all the attacking talent the hosts possess.

The man of the moment, Jack Grealish is currently enjoying the best football of his career right now. This may seem like an exaggeratedly lofty comparison, but the Brummie boy is turning into peak Eden Hazard before our very eyes.

Grealish previously had the creativity to match, but now he’s providing the penalty area production to be considered at that level too. In fact, he’s scoring and assisting at a higher rate than the Belgium was in his final Premier League season.

At this stage it would be foolish not to have Grealish in your fantasy team. The England international tops the league for key passes (19), and is second for big chances created (6), expected assists (2.81xA) and assists (5). His 70 penalty box touches are also the most of any player in the league – despite playing a game less than most of them.

Aston Villa face an out-of-form Brighton side who sit 16th in the Premier League table having conceded 1.75 goals per 90 minutes. However, their underlying statistics paint another picture. They have conceded just 1.05 expected goals per 90 while allowing the fewest shots against in the league (7.25 per 90).

That said, Villa should overpower them and the ingenuity of Grealish will be central to that.

Following a slow start to life at the Bridge that only saw him make one assist (for a penalty) in his first four league matches, Timo Werner has found his feet at Chelsea by providing four goals and an assist in his last four games for the Blues.

The German has also scored three in three in the Champions League and he found the net twice on international duty during the 3-1 win over Ukraine last week, so he is right in the middle of a hot run.

Newcastle United, Chelsea’s opponents in gameweek 9, have done fine results wise, but give the opposition so many chances to score. According to Fantasy Football Hub, they’ve already given up 104 shots in just eight games – that’s a massive 16.5 shots conceded per 90!

That should give Frank Lampard’s charges ample opportunity to run up the score and extend their six-game unbeaten run in the league. However, the London outfit’s recent form at St. James’ Park is surprisingly poor.

Newcastle have won five of the last seven meetings between the two sides at the venue, scoring 14 goals and conceding seven. Could they frustrate their southern foes once more?

The Fantasy Faithful podcast: Which Premier League teams are actually any good?

Everton’s recent regression has seen them slide all the way from first to seventh in the Premier League table, as their injury problems cascaded into a run of three consecutive defeats.

The Toffees will be much closer to full fitness for the meeting of Fulham, though, welcoming back two crucial components of Carlo Ancelotti’s gameplan in Richarlison and Allan. This should help Dominic Calvert-Lewin get back to his best; with Richarlison on the field he was scoring 1.4 goals per game, without him that dropped to 0.33.

The Yorkshire striker is enjoying his coming-of-age season right now, topping the scoring charts (alongside a few others) with eight goals in eight matches. He is second in the league for big chances (9) and has taken the fifth-most shots in the box (22) of any player. But it’s in the air where he could excel on Sunday afternoon.

No goalkeeper in the world is saving this ❌pic.twitter.com/7syK3DietT

As our friends at All About FPL pointed out earlier this week, Calvert-Lewin has attempted the third-most headers and scored the joint-most headed goals (2) in the league. This makes him a very dangerous matchup for Fulham, who have conceded more shots from headers (17) than any other team.

Facing Liverpool at Anfield is never the ideal hunting ground for captaincy points, but gameweek 9 of the 2020/21 season might be the exception to the rule.

The Reds have been stricken with injuries and coronavirus positives lately, with three of their starting back four – Virgil van Dijk, Joe Gomez and Trent Alexander-Arnold – all missing. Elsewhere they are also without Mo Salah and Jordan Henderson while Fabinho is a major doubt to play.

Liverpool have rarely been so depleted, so this is the perfect opportunity for Leicester City to snatch a rare win, something no team has managed at the ground since 2017, a run stretching for 63 games.

This could make Jamie Vardy a prime captaincy option for this week. The striker is the Premier League’s joint-top goalscorer this season with eight goals, although five of those have come from the penalty spot.

Vardy has three goals and two assists in his last three matches, so he is in great form at the minute, as are the Foxes, in general, having won each of those contests. The striker has a good record against the so-called Big Six and that goes for Liverpool, too, scoring seven times in 11 meetings with the Merseyside outfit.