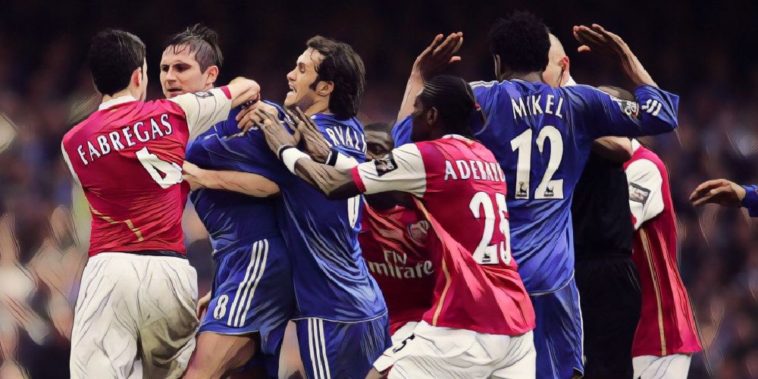 Cesc Fabregas has opened up on his 11 year spat with Frank Lampard that began following the 2007 League Cup final.

The showpiece of the League Cup back in 2007 saw Arsenal face Chelsea at Cardiff’s Millenium Stadium, the west Londoners beating their north London counterparts 2-1, a Didier Drogba brace securing the silverware for Jose Mourinho’s side after Theo Walcott had opened the scoring.

As the game drew to a close, a 19-year-old Fabregas was involved in a confrontation with Chelsea midfielder Lampard, and the clash sparked a dislike which lasted 11 years, only coming to an end when they worked together as pundits at the 2018 World Cup.

“The League Cup final was kind of crazy,” Fabregas told the Telegraph. “We were losing 2-1 and it was basically the last moment of the game and you feel a little frustrated. [John Obi] Mikel and Kolo Toure went into a tackle and both got sent off.

“Me and Frank had a moment there. I think maybe I was very young and very enthusiastic. I wanted to beat the world basically and sometimes I was overwhelmed by the situation and went over the top.

“Even when I was with Barcelona, I remember in the Champions League clash we also had our moments. I love it, personally. Frank is a competitor and a winner, and he will tell you the same thing.

“We met each other at the World Cup in Russia working for the BBC and we went to the gym together. We were having lunch together and that was when he had just signed for Derby, and I was asking him questions about how he saw the situation and he was explaining his plans a little bit.

“This is what football is about. I respect him so much for what he has done with Chelsea and for football in general. He was a fantastic player and a fantastic opponent to play against. Of course, I disliked him, because many times they beat us and it was difficult to play against him, but always with respect and admiration.”

Fabregas would go on to join Chelsea in 2014, though never played with Lampard who left the club the same year as he spent a season at Man City before seeing his playing days out at NYCFC.

Fabregas’ former clubs come up against each other on Saturday in the FA Cup final.

Five of the best FA Cup finals ever: Comebacks, shocks and the Five Minute Final