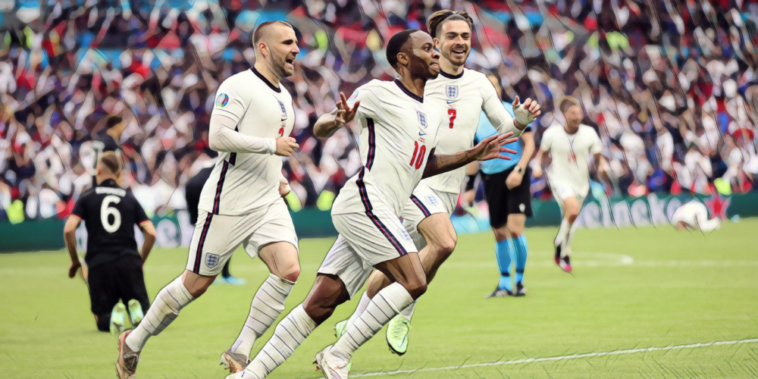 Cesc Fabregas reckons England have the slight edge over Italy ahead of Sunday’s Euro 2020 final, as the midfielder highlights how Gareth Southgate’s side can exploit their ageing opponents.

England famously booked their place in a first major tournament final since they lifted the World Cup in 1966, coming from behind to beat Denmark on an emotional night at Wembley.

The victory set up a mouthwatering clash with four time World Champions, Italy, Roberto Mancini’s side extending their unbeaten run to 33 matches with an excellent campaign, knocking out the likes of Belgium and Spain on the way to the final.

While many expect it to be a close game, former Arsenal and Chelsea midfielder Cesc Fabregas reckons that his native Spain side exposed some areas that England could exploit, suggesting Raheem Sterling’s runs in behind could be the key to securing a maiden European crown.

“I watched Italy carefully in the semi-final against Spain and I saw areas where I think England can hurt them on Sunday,” he told the Telegraph.

“Italy are very good with the ball, they are fit and they can run. They always defend on the front, but, as we saw against Spain, if you have the personality and quality to play and to move them around, then they can have problems.

“It is not easy because Italy press and press and press, but if you handle that pressure and then play around them a little bit then they are not the fastest in midfield and you can create a chance with a dribble or a one-two.

“Leonardo Bonucci and Giorgio Chiellini, they love going on the front foot but they hate balls behind them and that’s why I think Raheem Sterling will be so, so important once again with his speed, especially if he can go in between the full-back and the centre-back on the Chiellini side. He can have a lot of joy.

“Look at the goal of Alvaro Morata for Spain or the chance for Mikel Oyarzabal, there are these little spaces behind the Italy defence when someone goes behind the defenders and they have to run deep

“I think these runs are a strength of England because they have great passers in the final third with Mason Mount, even Harry Kane when he drops deep and Jack Grealish and Phil Foden when they get on to the pitch.

“England have top, top quality from the start and from the substitutes’ bench, and I know people will say the final is 50/50 but I think if you consider all the things together, then England are a little bit the favourites for me. They tick all the boxes.”

Fabregas is currently back in pre-season training with Monaco, and the 34-year-old says he has been ‘so impressed’ by the fitness shown by Southgate’s youthful side on the back of a long season.

“I have been so impressed by the fitness of the England players and that could be another important factor in the final. England have looked like they are one of the fittest teams and I thought Italy started to look tired against Spain.”

Shutouts: The countries with the most consecutive clean sheets in Euros history

See also – Forza: How Mancini’s archetypal Italians have rekindled my love for the Azzurri