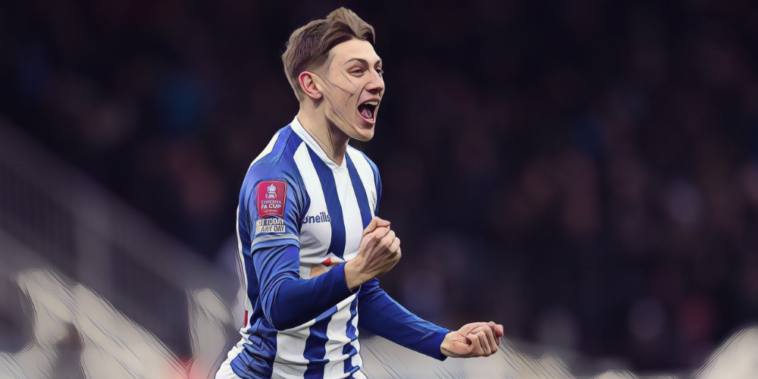 The FA Cup’s third round remains one of the most eagerly anticipated dates on the football calendar and we’ve compiled our Team of the Week from the weekend’s action.

Kidderminster Harriers upset the odds to beat second-tier Reading and reach the fourth round as the lowest-ranked side in the competition, whilst Boreham Wood join Russell Penn’s side as non-league representation at the next stage after eliminating AFC Wimbledon.

Arsenal were the biggest casualties of the third round after losing at Nottingham Forest, whilst Newcastle were beaten at home by Cambridge United. Liverpool and Tottenham are into the next stage, though survived scares after coming from behind against lower league opposition.

Following the third round action we’ve compiled an XI of the best performers, here is The Football Faithful’s FA Cup Team of the Week.

Cambridge United secured arguably the giant-killing of the third round after winning at Newcastle, the third-tier side riding their luck to secure a 1-0 win at St James’ Park.

Newcastle had new signing Kieran Trippier in the side for his debut, but were unable to find a way past the visitors with goalkeeper Dimitar Mitov making himself an FA Cup hero.

Dimitar Mitov had never played a senior game in the Football League until Cambridge gave him a chance in 2017..

Mitov made a series of saves to frustrate the hosts, including two finger-tip saves to deny Josh Murphy and Joelinton. The second of those came in stoppage-time to help secure one of the most memorable results in Cambridge United’s cup history.

Nottingham Forest caused an upset with a well-deserved win over Arsenal at the City Ground, eliminating the north Londoners at this stage for the second time in just four seasons.

The Championship side’s defensive performance saw Arsenal fail to register a single shot on target, with right-back Djed Spence his side’s stand-out performer in a brilliant showing at both ends of the pitch.

The 21-year-old dominated his duel with Gabriel Martinelli, producing a performance of boundless energy and tenacity as he linked well with Brennan Johnson down the Forest right.

Middlesbrough – his parent club who loaned Spence to their divisional rivals this season – must have questioned that decision when watching the youngster dominate against Premier League opposition.

Steve Cook enjoyed a debut to remember as Nottingham Forest beat Arsenal, the centre-back having arrived from Bournemouth this month following a decade with the Cherries.

The 30-year-old looked instantly at home in his new side’s back three, providing security alongside Joe Worrall and Scott Mckenna as the second-tier side frustrated their top-flight opponents.

Cook made an excellent block to deny Eddie Nketiah and his performance will be encouraging for Steve Cooper and his side, as Forest look to take momentum from this win and boost their push for a play-off position.

Boreham Wood have reached the fourth round for the first time in their history, beating AFC Wimbledon 2-0 to continue their FA Cup journey.

The National League promotion hopefuls were strong defensively and clinical further forward against opponents two leagues above, with Jamal Fyfield part of an organised back three that stood firm when under pressure from the visitors.

Special squad ❤️ Everyone plays a part 🙌🏾 not just the back 5, from training to matches. wouldn’t be possible without us all 🙏🏾 https://t.co/VDPG9FWxlV

Fyfield made a brilliant last-ditch challenge to deny Egli Kaja with the non-league side leading 1-0, providing the platform for Adrian Clifton to score a second late on and seal a famous win.

Chelsea’s academy system continues to produce high-quality youngsters with Lewis Hall the latest to make an impression following an outstanding debut for the European champions.

The 17-year-old started as left-back during the west London side’s 5-1 win over Chesterfield, and hardly put a foot wrong as he became the youngest player to start an FA Cup fixture for Chelsea.

Hall was full of endeavour and quality in possession, showing great desire to regain possession in a dangerous area before teeing up Romelu Lukaku for Chelsea’s third goal.

Hall had a second assist of sorts as his shot was parried into Andreas Christensen’s path and his performance will have provided Thomas Tuchel with food for thought as Chelsea consider left-back additions in the absence of Ben Chilwell.

Max Power has enjoyed an impressive season in the midfield of a Wigan side pushing for promotion from the third tier, with the 28-year-old again outstanding as the Latics upset Championship high-flyers Blackburn.

Power scored one and was involved in Wigan’s other two goals as the home side sealed a dramatic 3-2 victory, netting his side’s first equaliser after his effort from distance deceived Aynsley Pears to level the scores.

Proper cup tie that. This team keeps going until the very last second. Roll on the next round 🔵⚪️ pic.twitter.com/Y3EcTM6ai8

The midfielder covered a huge amount of distance and was confident in possession, proving an influential figure as Wigan won an entertaining cup contest.

Emiliano Marcondes has had a frustrating start to his Bournemouth career following his summer arrival from Brentford, but the midfielder provided a reminder of his quality with a hat-trick in the club’s 3-1 win at Yeovil Town.

The Dane opened the scoring after racing onto Chris Mepham’s long pass forward, before firing home a well-taken second after showing clever movement to put the finishing touch on another Bournemouth attack.

🇬🇧Amazing to add 90 minutes in the tank and even more grateful to get a Hat Trick 🎩 on the @EmiratesFACup thanks for the support! We go again next Saturday 💪🏼🍒 #afcb

The 26-year-old ghosted forward to claim his hat-trick in the second half and will now be hoping for more regular involvement in a Bournemouth side pushing for Premier League promotion.

Manchester City named a strong side for their 4-1 win at Swindon, but in amongst the star names was the inclusion of one of the club’s brightest prospects, Cole Palmer.

The teenager outshone several senior colleagues in an impressive performance for City, scoring one and creating another during a display in which he continually sought to make things happen.

Palmer beat his man comfortably to cross for Bernardo Silva to tap home, before bending a superb finish into the far corner to get his name on the scoresheet.

A brilliant finish by #YoungLions forward Cole Palmer in the #EmiratesFACup third round 👏pic.twitter.com/boGni5ifyT

The 19-year-old is bursting with potential and the confidence in his finishing ability bodes well for the future as Palmer continues to make an impression on Pep Guardiola at the Etihad.

Wolves’ best player as Bruno Lage’s side beat Sheffield United 3-0 to reach the fourth round, the winger looking a class above against his side’s second-tier opponents.

The 26-year-old continued his strong recent form with another showing of creative quality, linking well with Fabio Silva and proving Wolves’ match-winner with two well-taken goals.

He scored a first after being freed by Silva inside the area, before a wonderful weight of pass released Rayan Aït-Nouri in the build-up to Nelson Semedo scoring a second.

Podence then added his second and Wolves’ third – his first goals since September – and he has grown in influence in recent weeks for an improving side finding their form.

Bryan Mbuemo came off the bench to score a second-half hat-trick for Brentford this weekend, his treble helping the Bees see off the stubborn resistance of Port Vale.

The Frenchman was on the pitch for just a matter of minutes before he doubled the advantage given to Brentford by Marcus Forss opener, before breaking at pace to net a second after Port Vale had threatened a comeback following Kian Harratt’s debut goal.

3 – @BrentfordFC's Bryan Mbeumo is the first substitute to score a hat-trick in the #FACup since Joe Garner for Preston against Ipswich in January 2014. Impact. #PVLBRE

Mbuemo then scored his third – completing a first career hat-trick – from the penalty spot late on, with the 22-year-old now Brentford’s leading scorer this season with seven goals in all competitions.

Joe Grey scored the decisive goal as Hartlepool reached the fourth round for the first time in over a decade, the teenager coming off the bench to secure his side’s comeback win against Championship Blackpool.

Grey made himself a hero after scoring with virtually his first touch – and only his second goal in senior football – to book Hartlepool’s passage to a fourth round meeting with Crystal Palace.

The trip to face the Premier League side is a just reward for Hartlepool and match-winner Grey, whose heroics have earned his team a money-spinning tie as the club look to reconsolidate in the Football League.