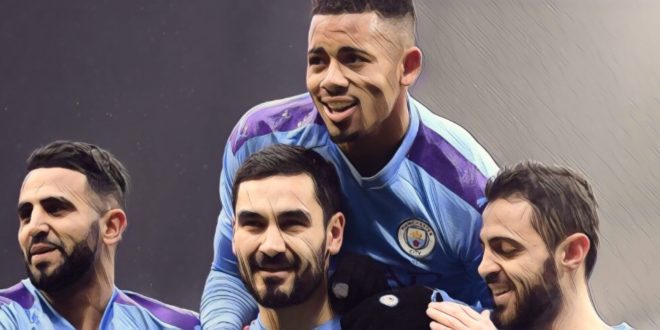 FA Cup Fourth Round: Team of the Week

Another enthralling weekend of FA Cup action saw Premier League leaders Liverpool survive a huge scare to emerge from League One Shrewsbury with a replay, though there were no such concerns for Manchester United who thrashed third-tier opposition in Tranmere at Prenton Park.

Holders Manchester City also advanced in comfortable style, though West Ham and Burnley were amongst the top-flight clubs to make an early exit.

It’s that time of the week again where we compile our dream XI of the weekend’s action, here in an uber-attacking 3-4-3 formation in The Football Faithful’s FA Cup fourth round Team of the Week.

Liverpool have barely faltered in a record-breaking start to the season so far, but a heavily rotated side came close to an almighty cup embarrassment at the hands of League One Shrewsbury Town.

The European champions were in cruise control after Curtis Jones’ opener and a Donald Love goal put them two goals ahead at the New Meadow, only to allow their hosts to come back and salvage a replay in dramatic fashion.

It could have been so much worse for Jurgen Klopp’s side, however, Adrian producing some impressive saves to help his side avoid a giant-killing. The Spaniard saved superbly with his feet to deny Shaun Whalley when through on goal, before another good stop to prevent Everton supporting Callum Lang.

Liverpool have a second chance with a replay at Anfield, and lessons will have been learnt here.

The Scotland international has spent much of the season on the fringes at Carrow Road despite Norwich’s struggles so far, but produced a performance that is likely to increase his claims for more regular involvement.

Daniel Farke’s side would progress from an all-Premier League meeting with Burnley at Turf Moor, with Hanley central to their success.

The 28-year-old headed home the opener from Mario Vranic’s free-kick, while producing a commanding display at the back as Norwich held on to claim a place in the fifth round.

Portsmouth produced their best performance of the season so far to upset Championship strugglers Barnsley, the League One outfit delivering a display of attacking intent as the two sides exchanged six goals at Fratton Park.

The 2008 winners are into the last-16 for the first time in ten years after an entertaining victory, that in truth flattered their struggling opponents.

Burgess would head home the fourth goal of the afternoon for Pompey, before being named as Man of the Match for Kenny Jackett’s side.

Manchester United‘s recent struggles left a trip to face League One Tranmere looking like a potential banana skin for Ole Gunnar Solskjaer’s side, though the Red Devils overcame their lower-tier opposition in fine style despite the difficult conditions of the Prenton Park pitch.

United would hit six without reply to cruise into the fifth round, Maguire scoring arguably the pick of the bunch to open the scoring after just ten minutes.

The England international ventured forward with regularity during the contest, and scored his first goal for the club with a sweetly struck strike from outside the area. Maguire would then later turn provider, again driving forward and providing an assist for Jesse Lingard.

There will be tougher tests to come for this United side, starting with a trip to the Etihad in midweek to face Manchester City, but their 6-0 victory was a welcome relief following some difficult moments of late.

Oxford claimed one of the results of the weekend, the third tier side producing a fine defensive display to earn a goalless draw against Premier League Newcastle at St James’ Park.

Oxford will get a second chance at an upset when they host Steve Bruce’s Magpies in a replay, and the club have midfielder Alex Gorrin to thank for that opportunity following a starring display.

The Spaniard was outstanding against their top-flight opponents, covering every blade of grass and taking one for the team late on to prevent a Newcastle break.

The star man in the shock result of the weekend, Shrewsbury midfielder Laurent looked a class above during the club’s 2-2 draw with Liverpool, starring at the heart of the League One side’s midfield.

Goalscorer Jason Cummings may grab the headlines, but it was Laurent who produced the most impressive performance and the 24-year-old’s classy display is unlikely to have gone unnoticed.

Out-of-contract in the summer, Laurent has been linked with making the step up to a bigger side and based on this evidence he is ready, though a chance to repeat his performance at Anfield could attract further interest.

Leicester will be amongst a host of clubs with realistic ambitions of lifting the FA Cup this season, Brendan Rodgers’ side having shown themselves to be one of the best in the Premier League during the opening months of the campaign.

The Foxes secured their passage through to the next round with a hard-fought 1-0 victory at Championship high-flyers Brentford, but it took a moment of top-level quality to separate the sides, courtesy of a majestic pass from Dennis Praet.

The summer signing was the best player on the pitch and produced an out-of-this-world pre-assist pass to James Justin, a sweetly driven drive that took out the entire Brentford defence and paved the way for Kelechi Iheanacho to put Leicester into the last-16.

The aforementioned Burgess may have been named as Man of the Match, but few inside Fratton Park will have doubted Cannon’s match-winning performance as Portsmouth dismantled Barnsley.

It’s been a difficult adaptation for the 23-year-old since his move from Rochdale in January of last year, but he was the star of the show during Portsmouth’s victory this weekend, his best performance since joining the club.

The tenacious midfielder’s performance will demand more regular inclusion, his creativity behind the sole forward central to an impressive Pompey display of attacking football.

The holders booked their place in the fifth round in routine fashion, thrashing Championship promotion chasers Fulham 4-0 at the Etihad.

Jesus would win the early penalty that would lead to Tim Ream’s sending off for the visitors, with Man City rarely troubled as they made their man advantage count in ruthless style.

The Brazil international would net a quick-fire brace in the second half to put the finishing touches on a comprehensive scoreline, the 22-year-old taking his tally to 16 goals for the season in all competitions.

Shrewsbury’s two-goal hero, Cummings would come off the bench to salvage a dramatic draw against Premier League leaders Liverpool, earning his side a money-spinning replay at Anfield in the process.

The 24-year-old had been on the pitch for just five minutes when he confidently took responsibility for the host’s penalty, sending Adrian the wrong way from the spot after youngster Yasser Larouci fouled Josh Laurent inside the box.

Just ten minutes later he would have his second and Shrewsbury’s equaliser, calmly firing past Adrian to spark wild celebrations and earn Sam Rickett’s side a second chance at a giant-killing.

Could the veteran forward remain at Sheffield United beyond the transfer window?

The Blades captain has been linked with an exit as he seeks more regular first-team football, but after a strong performance against Manchester City last time out, he was once again impressive as Chris Wilder’s side booked their place in the fifth round with victory at Millwall.

Sharp’s link-up play was a feature throughout the win at the Championship side, playing a part in both goals during the 2-0 victory.

Speculation continues to link him with an exit ahead of the transfer deadline, but on this showing he still has plenty to contribute to a squad performing above all expectations this season.