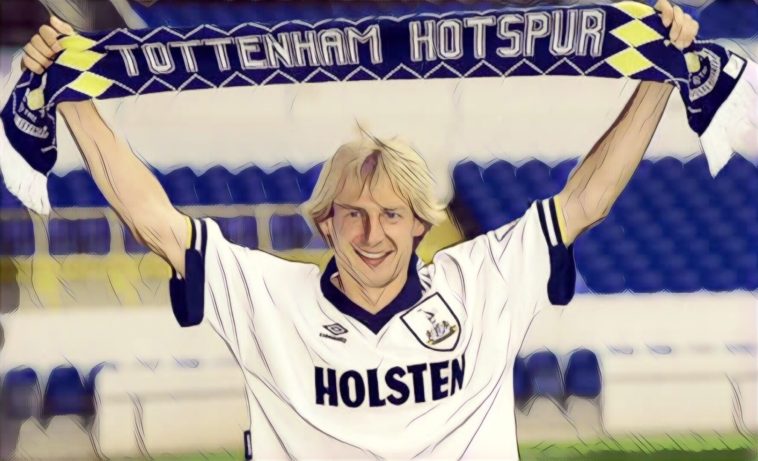 Loan signings remain an intriguing part of the transfer market and this season has been no different, Manchester United shocking the footballing world with the unexpected and temporary capture of former Watford forward Odion Ighalo in January.

Elsewhere, Dean Henderson has starred for Sheffield United on his second loan spell from Old Trafford, whilst Dani Ceballos and Harry Wilson have enjoyed mixed success during Premier League stints away from their respective ‘parent clubs’.

Following the fortunes of that aforementioned quartet and many others, we’ve decided to revisit the archives for some of the most successful loan deals the league has seen.

Here are five of the best loan signings in Premier League history:

Klinsmann became a huge fans’ favourite in north London following a stunning single season stay in the mid nineties, scoring 30 goals in all competitions during the 1994/95 season to be named as the FWA Footballer of the Year.

The World Cup winner had arrived in England with a reputation as a diver, but answered the boo boys in style by scoring a bullet header against Sheffield Wednesday on his debut and famously diving in front of the fans – a celebration every kid of the 90’s performed endlessly thereafter.

Bayern Munich would come calling at the end of the season, however, and Klinsmann headed back to his homeland for a successful spell in Bavaria, later joining Sampdoria before a surprise return to Spurs on loan.

New head coach Christian Gross secured the capture of the popular forward with Spurs struggling near the foot of the Premier League, the German proving the inspiration behind the club’s survival fight as they moved out of the relegation places.

Klinsmann scored nine goals in 15 Premier League appearances – including a four-goal haul in a 6-2 win at Wimbledon – finishing as Spurs’ top scorer despite arriving mid-season before retiring at the end of the campaign, his place in the club’s history assured.

The former Arsenal and Nottingham Forest striker’s Turkish adventure would end after just months in extraordinary fashion, a racist attack on the forward by Trabzonspor chairman Mehmet Ali Yilmaz leading to Campbell seeking a swift return to English football.

Everton secured the forward’s services with the club mired firmly in the midst of a relegation battle, though Campbell’s impact would be immediate as he fired the struggling Merseyside club away from danger.

Campbell scored nine goals in just eight appearances over the second half of the season, becoming the first loanee to be named as the Premier League’s Player of the Month in April 1999. His goals saw Everton move away from the relegation places to finish 14th, Campbell scoring three successive braces as the Toffees won four of their final six fixtures to survive.

He later signed for the club on a permanent basis, enjoying a successful six-year stay at Goodison Park.

Steve Bruce described Birmingham City’s capture of World Cup winner Christophe Dugarry as the biggest signing in the club’s history, though the forward would deliver on the huge expectations following his arrival at St Andrew’s.

The Midlands outfit were in need of inspiration during their debut season at Premier League level, and the arrival of Dugarry from Bordeaux during the second half of the season was greeted amid much fanfare.

The experienced forward proved the catalyst behind Bruce’s side’s battle to beat the drop, scoring five times in four games as Birmingham registered four consecutive victories towards the season’s end, eventually finishing in the dizzying heights of 13th.

Dugarry would sign permanently but fail to replicate the performances of a memorable loan spell, though his short stint was enough to see the Frenchman inducted into Birmingham City’s Hall of Fame.

The emerging Sturridge swapped Manchester City for Chelsea as he sought to aid his development, but a lack of minutes would see the youngster head out on loan to join Owen Coyle’s Bolton Wanderers.

Sturridge began in fine fashion with a last-minute winner against Wolves on his debut, before becoming just the sixth player in Premier League history to score in each of his first four games for a Premier League club.

The on-loan 21-year-old continued to fire at a prolific rate, hitting eight goals in just 12 appearances during his six-month spell at the Reebok Stadium. His impressive form would see him return to Chelsea, though unable to make a breakthrough he joined Liverpool, scoring 50 Premier League goals in just 116 appearances and winning the Champions League before his departure in 2019.

Things have not been going to great for the talented attacker as of late though, the 26 cap England international recently serving a worldwide ban for breaching the FA’s gambling regulations.

Another promising forward unable to make a breakthrough at Stamford Bridge, Romelu Lukaku joined West Brom on loan from Chelsea as he looked to secure regular first-team football.

Steve Clarke secured the services of the burly Belgian on a season-long deal from his former side, and Lukaku repaid the Scot’s faith with a prolific season at the Hawthorns.

The forward scored 17 Premier League goals to fire West Brom to eighth – the club’s highest ever finish in the Premier League era – and sign off his temporary stay at the club with a hat-trick against Manchester United in Sir Alex Ferguson’s final game in charge of the Old Trafford club.

Lukaku would go on to score over 100 Premier League goals during later spells at Everton and Manchester United, before joining Inter Milan in a £73m deal in 2019.