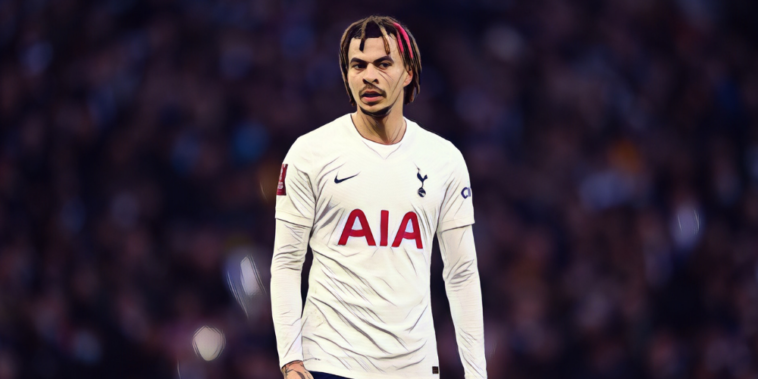 Everton are in talks over a deadline day move for Tottenham’s Dele Alli.

The Blues have endured a difficult time in the Premier League of late, winning just once in their last 14 league outings, a run of form that saw Rafael Benitez’s spell as manager brought to an end.

Frank Lampard has now been confirmed as the latest incumbent to take the Goodison Park hot seat, with the former Chelsea boss left with little time ahead to add to a squad that is sorely in need of improvement.

The club are expected to announce the loan signing of Donny van de Beek from Manchester United before the 11pm deadline, and according to Sky Sports, they have now opened talks over a permanent move for Dele Alli.

The 25-year-old was once the golden boy of English football, though has seen a dramatic downturn in his fortunes in recent seasons, failing to showcase his best form in recent seasons under a succession of different managers.

Dele Alli's future is the topic of much discussion…

According to the report, Everton are in discussions over a deal that could reach ‘up to £40 million’, with the eventual transfer fee structure set to be entirely ‘based on the midfielder’s performances’.

While there is so far no formal agreement, talks have advanced to such a stage that a medical has been booked in, in expectation of a deal being reached by all parties ahead of the deadline.

Sky say that new Toffees boss Lampard has been ‘key’ to the deal, with the former midfielder feeling that he can get the 37 cap England international ‘back to his best’.

Alli has started just 36 games for Spurs in the last two-and-a-half seasons, scoring nine times and providing five assists in that time.

See also – Deadline Day Folklore: When Peter Odemwingie rocked up to Loftus Road only to get locked out