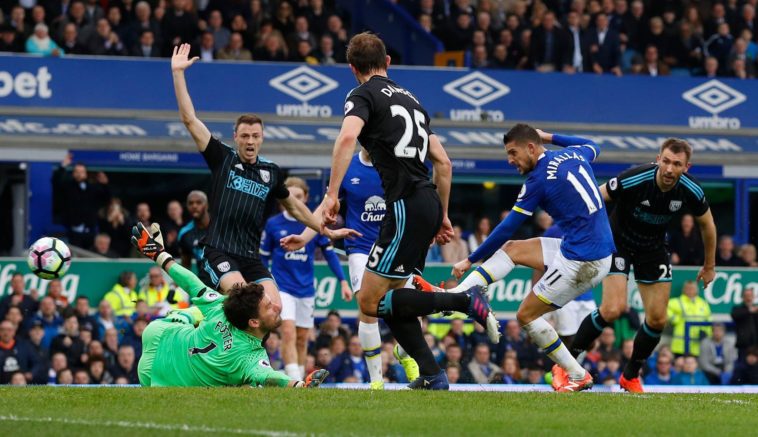 After their loss to Spurs last week Everton knew that a win was vital. They played against what are turning out to be this seasons closest rivals.

A win would ensure there’s breathing space between the pair and maybe give some form of hope in the late Champions League push which week after week looks more unlikely.

I think it’s fair to say that after 300 Premier League games as a manager, everybody knows how Tony Pulis’ team would set up and Ronald Koeman was certainly in the know as well. Although once the team news was announced many had criticized as it would not have given very much confidence at all. Gareth Barry kept his place in the side after a less than stellar outing last time out. Captain Phil Jagielka came in from the cold after only one previous minute of Premier League football in 2017. On the bright side it also saw a return to the bench for injured youngster Dominic Calvert-Lewin who was unfortunately injured so soon after coming into the first team.

Tight at the back

Koeman’s side knew it was imperative that West Brom did not score first. The Baggies are notoriously hard to break down and Everton did their own job of containing them in the opening exchanges.

Ross Barkley and Kevin Mirallas appeared much more in their own half for the first twenty minutes. It was clear Koeman had drilled a defensive mentality into his men making sure a goal wasn’t conceded early.

After this period of defence, the players began attacking more. Players got forward more and most importantly, started getting Romelu Lukaku involved in the game. This began a period of Everton pressure that would’ve pleased the boss. It ultimately led to the goals coming for the Blues.

Finally near the 40th minute the Toffees broke the deadlock with what could be generously described as a scruffy goal. A fortunate ball to Ross Barkley led to a shot that Ben Foster should’ve comfortably saved. The England ‘keeper spilled the ball which was blasted in by Kevin Mirallas who has been involved in 5 goals in his last 7 league games.

Of course when it rains it pours and just before half time new boy Morgan Schneiderlin scored his first Everton goal to double the lead. Funnily enough Schneiderlin gave in an interview in the week saying he doesn’t know what he’d do for his first celebration and I think the knee slide was a nice start, hopefully it’s not the last celebration we see from the Frenchman.

When the teams came back out from half time it was clear that West Brom weren’t really up for a scrap and accepted that unless a miracle came, a win wasn’t coming. The scoreline remained until into the 82nd minute. Romelu Lukaku scoreline rejoined Harry Kane at the top of the Top Scorer charts for the Premier League. The Belgian striker scoring goals a fine header that Ben Foster could do nothing about.

A fine well balanced performance where everyone did their job was just what was needed to give the European dream the kiss of life. It seems that 7th is all but guaranteed for Everton with this win giving the Blues a seven point advantage on West Brom who have a tough run in left in the final 10 games.

The prize for the seven placed finishers is now guaranteed a place in the Europa League. This was confirmed with Tottenham Hotspur’s victory over Millwall in the FA Cup confirmed that the League One club couldn’t win he famous trophy and hence win the European spot. Everton will hope they can carry on now and continue improving to finish as high as possible to attract the highest calibre of player in the Summer Transfer Window.