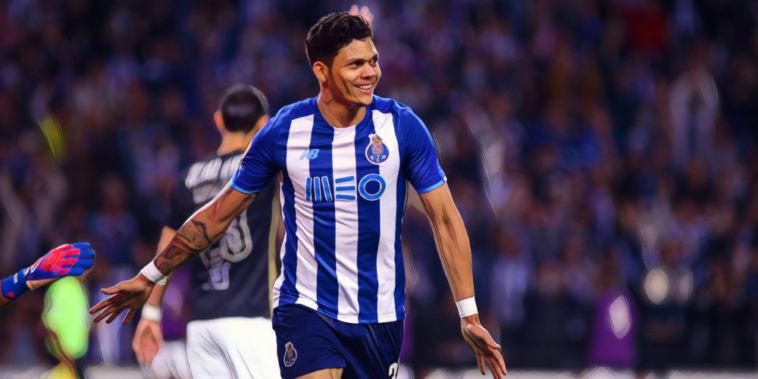 Manchester United are being linked with a move to sign Porto forward Evanilson, as Erik ten Hag looks to improve the firepower among his options at Old Trafford.

Portuguese football has been a happy hunting ground for Premier League sides in recent windows, with the likes of Bruno Fernandes, Ruben Dias and Luis Diaz among the names to have left the Primeira Liga and hit the ground running in English football.

Evanilson could be the latest to head to England after impressive performances in Portugal, having become the latest South American starlet to make an impression at Porto.

The 22-year-old began his career with Fluminense, though was loaned to Slovakian affiliate team Šamorín as a teenager as he sought to gain experience.

He signed for Porto in a €8.8m deal in 2020, with his first season one of limited opportunities as he made just four league starts for the campaign, scoring three goals.

The departure of Moussa Marega last summer provided Evanilson with a greater role in the side and it is one he has taken in fine fashion, playing a prominent role in Porto’s title success as Sérgio Conceição’s side regained the Portuguese title.

Featuring in a forward pair alongside Iran international Mehdi Taremi, the duo combined for 47 goals across all competitions. Evanilson scored 21 in his second full season at the The Estádio do Dragão, becoming first foreign player in 40 years to break the 20-goal barrier in a season for Porto aged under 22.

Each of Evanilson’s 14 league goals came from inside the 18-yard box and his movement inside the area has been crucial to his rapid development around goal.

Anticipating where the chances will fall has been a factor behind his output, with a number of his goals coming from close range when presented with square passes or knockdowns from teammates.

Amongst his finest was a clever back-heeled flick after meeting Otavio’s cross in the 2-1 win over Maritimo in late January.

Evanilson’s most clinical performance of the campaign came with a hat-trick as Belenenses were thrashed earlier in the month, a treble which showcased the range in his finishing.

Despite being predominantly right-footed, he scored a left-footed brace to put Porto in control before rising to meet Fabio Vieira’s corner to head home for the match ball.

His second was the pick of the bunch, showing class and composure inside the area to feint past a defender before lashing home as the ball cannoned in off the post.

Having began his career in a wide role before moving centrally, his instincts around the box have been key to his development and there is a clear show of composure when the chances fall his way, with the youngster rarely rushed before picking his finish.

Such has been his sharp-shooting around goal, he has been compared to Robert Lewandowski, having earned the nickname ‘Lewanilson’ during his time at Fluminense

“I like Lewanilson. Since Fluminense they gave me this nickname,” he told Portuguese outlet Mais Futebol.

“Now some FC Porto fans also treat me like that. Lewandowski is a great reference in my position and is a great player. I’m happy for the nickname Lewanilson”

Busy and alert inside the area, he has also shown both selflessness and awareness when required, providing four assists during the campaign with his propensity for holding onto possession bringing others into the game.

Among the Red Devils’ current forward options, only Edinson Cavani (8.8) has lost possession on less occasions per 90 than Evanilson (9.3) in league action last season.

United’s interest comes amid an over-reliance on Cristiano Ronaldo for goals, with Cavani having now departed and both Marcus Rashford and Anthony Martial having failed to live up to their early potential.

The numbers point favourably to the club’s interest in the emerging Brazilian, whose numbers for conversion rate (25.45%), chances created per 90 (1), ground duels won per 90 (4.4) and ground duel success percentage (58.8%) outperform each of Ronaldo, Cavani, Rashford and Martial.

For a divisional comparison, his shot accuracy of 63.64% bettered that of Darwin Nunez (62.32%), a reported Red Devils transfer target who finished as the leading scorer in Portugal before completing a move to Liverpool this summer.

Given this has been his first full season exposed to a top-level league in Europe, the potential is clear for Evanilson despite the forward remaining raw and with areas to improve.

United have been rumoured to have had a bid in the region of £55m rejected, with the Portuguese champions under no pressure to sell. Evanilson has spoken of his fondness for English football, but says he must continue to evolve at Porto.

“I’m at a good level in my career, but I’m not at a top level. I have a lot to evolve. But that’s what I work for. If any big team comes… I will try to do my best at FC Porto. I will work hard to be prepared to the fullest.”

Porto’s price-tag of around £70m is understood to have deterred the likes of Brighton and Wolves from firming up their interest and is a fee that would make Evanilson a gamble given his relative inexperience.

Porto – whose impending sales of Fabio Vieira and Vitinha mean the club can drive a hard bargain – will demand a premium.

He has, however, shown attributes this season that would make him an intriguing option for Ten Hag’s rebuild of the Red Devils.